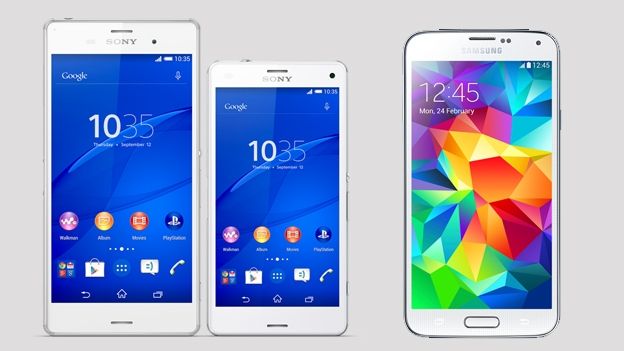 Sony may have only released it's super specced flagship Xperia Z2 smartphone earlier this year, but the Japanese outfit is not waiting until 2015 to push out an update, it's doing it right now at IFA 2014 in Berlin.

Sony may have only released it's super specced flagship Xperia Z2 smartphone earlier this year, but the Japanese outfit is not waiting until 2015 to push out an update, it's doing it right now at IFA 2014 in Berlin.

Unsurprisingly titled the Xperia Z3, Sony's new super phone comes with a seriously stacked spec sheet, clever extras and the choice of two screen sizes. There's the regular Z3, which boasts a 5.2-inch screen, and a sequel to the Z1 Compact in the Z3 Compact, which comes with much more pocket friendly 4.6-inch version.

But, should you run out right away and upgrade to Sony's latest Android blower? Or should you instead spend your hard earned pennies on Samsung's equally spec-tastic Galaxy S5? Well, how about we put the two together and compare! Let's go.

As we mentioned before, the Sony Xperia comes in two flavours, a regular version with a 5.2-inch, full HD display and a Compact version with a 4.6-inch, 720p screen. Both pack a bunch of display improving additions including Triluminos tech and the X-Reality engine for improved outdoor visibility.

Samsung kits the Galaxy S5 out with a very impressive Full-HD, Super AMOLED panel measuring 5.1-inches, so slightly smaller than the Z3

Sony has a long history in the photography sector, churning out top class compact cams like the RX100 MK 3 and the similarly impressive Alpha series. So it's no surprise really that the Xperia smartphones also pack some imaging prowess.

As with the Z1 and Z2, the Z3 crams 20.7 megapixels into the snapper, but that's just the start. There's a BIONZ image processor and an Exmor sensor for sharp shots, plus a wide angle 25mm Sony G Lens - letting you get more into your shot. SteadyShot keeps your 4K videos shake free and there are loads of extra camera apps.

The Samsung Galaxy S5 packs 16 megapixels in its rear snapper along with an HDR mode that provides realistic looking skin tones. Auto-focus is super quick, taking just 0.3 second to lock on to its target. Another particularly cool feature is Selective Focus, which allows you to achieve snaps with a shallow depth of feel effect, similar to those captured on pricey DSLRs. UHD video recording is also included, just like on the Xperia Z3.

Samsung has its critics when it comes to build quality, us amongst them, and it didn't really improve its standing with the plastic S5. We also weren't huge fans of dimpled plaster look of the back, but at least it's sturdy.

Aluminium and glass are the materials of choice for the Xperia Z3, with the metal frame flanked once again by glass on either side. It's pretty similar to other entries in the Xperia Z series; though a little more rounded we'd say.

Two phones with enough added features to shake a stick at, the Xperia Z3 and Galaxy S5 both pack generously in the 'extras' department.

The S5 has the fitness market covered, with a heart rate monitor built right into the rear under the camera a whole suite of healthy living aimed features crammed into S Health.

if you're more of a virtual runner, the Xperia Z3 is the first device to come with PS4 Remote Play support. Stick on the Game Control Mount (sold separately) and attach a Dualshock 4 controller (also sold separately) and you're set to stream games from your PS4 to your phone.

Both are resistant to water, dust and other muck, while the Xperia Z3 aims to entice the lover of fine audio with MP3 upscaling tech and virtual noise cancellation, along with some snazzy in-ear buds.

Unlike the S5 though, the Z3 doesn't include a fingerprint scanner, so you'll have to stick with the pin code for a little while longer.

Both these devices pack a Snapdragon 801 processor, with 3GB RAM for the Z3 and 2GB for the S5. Performance on the S5 is snappy, so we'd expect the same for the Z3. LTE is of course standard on both.

Battery life is a big talking point when it comes to high-res, power thirsty superphones and both the Xperia Z3 and Galaxy S5 are trying to eek as much juice out as possible. With the Z3, Sony claims you'll get two days of usage thanks to 'unique power-saving technology' plus the Stamina mode will turn off unnecessary functions to keep it going a bit longer. If the two day battery life claim is true, we'll be very happy bunnies.

Samsung's Galaxy S5 lasts about a day with regular usage, though it does have a power saving mode that turns everything retro black and white and keeps it going much longer.