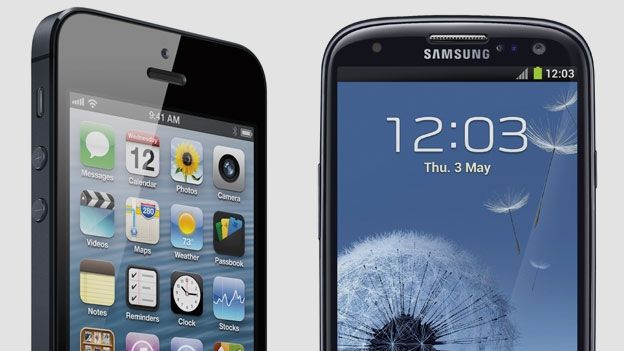 The Apple iPhone 5 takes on the Samsung Galaxy S3, but who comes out on top in this epic clash of the titans? We square up the specs to find out

Whether you love the sound of the new iPhone 5, or massively underwhelmed by the latest Apple smartphone instalment, it's probably going to sell in its millions and have fanboys queuing outside Apple Stores across the world.

Fear not Android lovers, for the Samsung Galaxy S3 is an Android smartphone goliath that should prove worthy competition for the iPhone 5. The question is, does the S3 actually boast better features than the latest Apple blower? It's time for a smartphone spec showdown...

Let's start with the chassis because, let's face it, that's the only distinct visible change to differentiate it from its two previous family members. Grasp the frame in your hand and the first thing you'll notice is the weight; it's the lightest iPhone ever.

By a long way. At 112g, it's 20% daintier than the iPhone 4S, 16% less butch than the Samsung Galaxy S3 and 14% lighter than the HTC One X. Reducing the SIM to weency, or 'nano', size has helped, minutely, as has making the shell out of anodised aluminium.

The brace of glass strips adorning the top and bottom of the rear give both the black/slate and white/silver models a premium feel but are actually employed to allow an uninterrupted phone signal. No-one wants another antennagate.

Available in 'Marble White' and 'Pebble Blue' (pebble... blue?!) and now titanium grey, the Galaxy S3 is sporting a curvier look than the iPhone 5 . It actually looks far less like it's older brother, and actually more resembles of the Samsung Galaxy Nexus, both in size and contours, although the plastic finish on the back feels more premium than its predecessor. Measuring 136.6 x 70.6 x 8.6mm, the S3 is slightly longer, wider and fatter than the S2 (125.3 x 66.1 x 8.49mm), which may prove to bit a little on the large side for some although the extra thickness may actually make the S3 slightly easier to hold and less likely to slip from your hand, particularly when taking a photo. At 133g, the S3 is very slightly heavier than the S2, although only by 3 grams, so it's barely noticeable.

The four-inch screen, which we'll come onto in detail shortly, is Apple's belated nod to the industry trend for bigger displays, and means the iPhone 5 now stands a proud 123.8mm tall – width remains the same at 58.6mm. The extra screen real-estate is welcome, though smaller-handed iPhone users might struggle to reach the standby button with a forefinger while holding it in a natural position. They might even have to stretch for the extra top row of apps. Just hold it a different way, perhaps.

It's still a lovely and Retina; it now boasts 326ppi and a resolution of 1136x640; it's equally as bright and slightly richer in colour. There's space for a whole extra row of apps – woop! – and tasks can still be performed with one hand. The main benefit is that you can just see more. Web pages are longer, movies are wider, though many we found from iTunes and YouTube still have to be stretched or cropped to fill the screen, the photo viewing area is bigger (just) and Apple's own, optimised apps make good use of the extra space.

The S3 one-ups the iPhone 4S and HTC One X on screen size, with an enormous 4.8-inch HD Super AMOLED screen, which displays at a maximum resolution of 720 x 1280. At 306 pixels per inch, the screen is slightly below the quality of the HTC One X and the iPhone 4S but frankly, 306ppi is still eye-searing stuff. Everything that we said about the HTC looking great because of it's size is even more true of the Samsung Galaxy S3. Once again the screen uses Super AMOLED technology, to keep the viewing angle as wide as possible.

The rear iSight camera remains impressive, taking great pictures in bright conditions. There's a bigger virtual camera capture button and video stabilisation seems to have improved.
It now detects faces and auto-focuses in video and allows you to capture stills while taking video. The video-compression algorithm has also improved, reducing the file-size of footage without any discernible reduction in quality, and making for friendlier email attachments.

Low-light image capture improvement was also discussed in the Keynote but we still experienced a fair bit of grain in our testing. The major improvement is with the front camera, which has been upgraded to 720p video, making FaceTime and Skype chats much clearer. Still shots are captured at 1.2MP, so not exactly archive-worthy. The new Panorama mode is intuitive and produces great results. It doesn't capture in landscape orientation, which feels counter-intuitive, but the speed at which it processes and pops out a pretty, panoramic shot is impressive.

The rumoured 12MP camera sadly does not make an appearance. Instead the Galaxy S3 arrives with a perfectly reasonable 8MP/1080p camera, exactly the same as that on the HTC One X. In burst mode, the camera takes continuous shots at a rate of 6fps, then picks the best shot based on smile detection, blink detection, contrast and blurring. According to Samsung, the camera also has zero shutter lag along with an improved shot-to-shot time. You'll be able to set up rules for photos to be automatically placed in groups based on faces, contacts or location. There's also Face Zoom which means that you can tap on a face when lining up a crowd shot and the camera will zoom in automatically. The lack of optical zoom means that this is going to be fairly limited, but we look forward to trying it out in the wild.

It also has a 1.9MP camera on the front, which suffices for profile pictures, video calls and the like. Curiously, that's actually smaller than the Galaxy S2's 2MP front camera sensor, but still a major improvement on the 4S' 0.3MP front-facing camera.

Moving from the A5 processor found in the 4S and the iPad 2, to a new A6 chip, Apple claims it will deliver a CPU two times faster than the A5 and up to times better graphics. So, expect apps to launch quicker, browsing to speedier and overall performance to step up significantly from the 4S.

Samsung has put their own quad-core 1.4GHz Exynos processor into the Galaxy S3, and bolstered it with 1GB RAM. The quad-core processor certainly seemed to do the trick in the limited time that we had with the phone. There was barely any lag when switching between home screens and firing up apps. Flash memory is available in 16, 32 and 64 GB versions, improving on the S2's 16GB offering, while there's also a micro SD card slot should you wish to expand the memory. There's also 50GB of free storage for your content on Dropbox for the next years, which is double what HTC is offering on its HTC One X.

New phone, new operating system. iOS 6 promises a slightly tweaked user interface with a new look App Store with iCloud support, a smarter Siri that will launch apps, FaceTime over 3G and plenty more. It's still one of the best mobile operating systems and the new features have certainly enhanced its capabilities. If you want to know what we made of the new mobile OS update you can read the iOS 6 review here.

The Galaxy S3 comes with Android 4.0 Ice Cream Sandwich as standard. Like HTC, Samsung has taken Android 4.0 and overlayed their Touch Wiz UI - an interface that we already loved from it's Galaxy S2 days. It's been streamlined a little - the wealth of features remains, but things feel a little less cluttered.S Voice is essentially voice-activated control that will give you direct access to functions such as the camera, calls, text, the alarms, weather, calendar and music and it'll even work when music is playing. What it won't do is answer you back with pithy retorts, like Apple's Siri. An Android 4.1 Jelly Bean update is expected to be available from October but it will be interesting to see how it compares to the version we have seen so far on the Nexus 7 and Samsung Galaxy Nexus.

In our testing, real-world battery life doesn't seem to have changed much since the iPhone 4S, which could be seen as a good thing considering the iPhone 5 is a more advanced product, but you'll still need to charge it every night to give you enough juice for the next day.

You can watch a couple of films on a flight or listen to hours and hours of music on one charge, but talking and 3G surfing take a heavier toll, and 4G connectivity could be even more of a drain.

The Galaxy S3's 2100mah battery is a big improvement on that of the S2, and ought to be hefty enough to handle all the tech that has been packed into the S3. A bigger battery doesn't mean longer battery life, but we'll give the S3 the benefit of the doubt for the moment.

The battery in the Galaxy S2 was pretty good, and the extra power in the Galaxy S3 probably cancels out the bigger battery. The S2 outperformed the iPhone 4S in this category, so we'd expect the S3 to do the same.

So does the iPhone 5 conquer the Samsung Galaxy S3? Well, we gave the Android smartphone a glowing five-star review and the latest Apple handset just four out of five, which indicates that it's this round to the S3.

There's no denying that the iPhone 5 is Apple's best handset to date and while the current Maps issues threatens to put some people off from upgrading, we fully expect the Apple smartphone to still fly off the shelves. The key of course is that many of the new features already appear on Android handsets and the Samsung Galaxy S3 covers most if not all the specs that would usually make the iPhone stand out from the crowd, from the camera, to the sizeable screen and Google's always improving Android operating system. As we said in our iPhone 5 review, It's good, very good. But the iPhone is no longer the best around.

Already and Apple fan with an iPhone 4S and looking for a change take a look at our iPhone 5 vs iPhone 4S video below to see the old vs the new.

Are you planning to buy an iPhone 5? Let us know your thoughts below