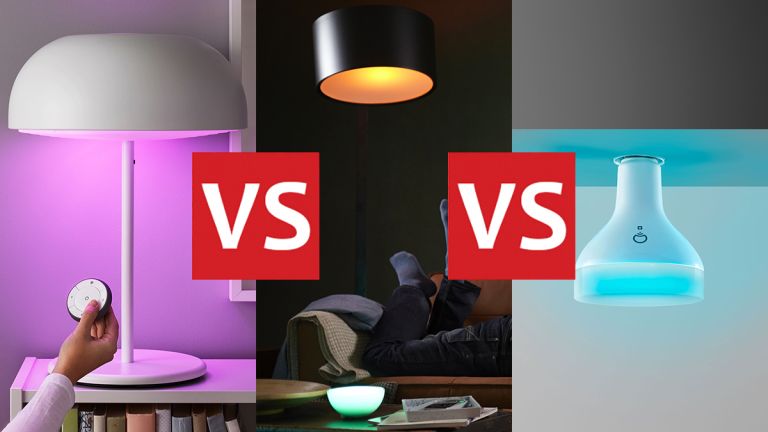 When it comes to smart home tech, smart lights are undoubtedly some of the coolest kit you can buy. Have your lights switch on as you're heading up the driveway, or with a tap of a button on your smartphone, as if by magic – you really feel like you're living in the future.

But the question is, which set of smart lights should you go for? The Ikea Tradfri, Philips Hue, and Lifx ranges represent some of the best products on the market, so we've put them up against each other to compare them – and to see which ones are right for you.

The Ikea Tradfri range of bulbs and lights is the smallest of the three here – a selection of white bulbs (with Edison or Bayonet caps) and panels, plus one or two switch options. While you can change the 'temperature' of the bulbs (switching between a warmer glow and a brighter light) the only full colour Tradfri bulbs are exclusive to the US at the moment. That might change in the future, though.

The Lifx range is somewhere in the middle – it has many more types and sizes of bulb, with security lights and outdoor lights as well as standard bulbs (with Edison or Bayonet caps). It also has some more unusual lights for different design needs, including strip lights, tile lights, and thin but rigid light blocks called Beam lights. You can pick up white bulbs or full colour ones across the whole range too.

Finally Philips Hue has the biggest range, just about, when you consider all the different types of bulb on offer – as well as bulbs, Philips Hue has a bunch of standalone lamps, outdoor lights, strip lighting and other options to pick from. Both Edison and Bayonet fittings are available across the range, and if you need a particular type of light or light bulb, chances are there's a Philips Hue product to fit.

Tradfri bulbs from Ikea are reasonably easy to set up: some models even come with a remote control or dimmer switch if you don't want to use the (rather basic) smartphone apps. In most cases, to use most of the bulbs and most of their features, you do need to install a gateway hub that's plugged into your router first though, through which your smart light communications go. The bulbs do work with Amazon Alexa devices, the Google Assistant app, and with Apple's HomeKit platform as well, giving you a few other options for controlling them besides the Ikea remote or app.

As for Lifx bulbs, they're perhaps the easiest to set up out of the three product lines here. You don't need an extra hub plugged into your router, so you can just get started with a single bulb if you want to – the mobile apps that accompany the lights are simple and intuitive to use and packed with features. Like the Tradfri lights, Lifx bulbs and fittings work with Amazon Alexa, Google Assistant and Apple HomeKit, so you can easily integrate them into the rest of your smart home setup.

And then there's Philips Hue – these bulbs are a breeze to set up and configure, but you do need a hub connected to your router to be able to do anything, as with the Ikea Tradfri lights. The app recently got a major update, making it much easier to set timers, change colours, and adjust brightness, and again there's compatibility with Amazon Alexa, Google Assistant and Apple HomeKit here if you should need it. None of these systems are a pain to set up, but Lifx just edges it for speed and simplicity.

In terms of features, a lot of cool stuff is the same across the board: with all of these products, you can control your lights with your phone, integrate them with other smart home systems, set them to run on a timer, change them while you're away from home and more. We've already mentioned the Apple HomeKit, Amazon Alexa and Google Assistant integration all these bulbs have.

There are a few differences though. Lifx bulbs, unlike the Philips Hue or Ikea Tradfri ones, don't come with an official motion sensor you can use (you have to connect one through a third-party system like HomeKit). However, Lifx bulbs do have a range of effects, like candlelight and strobe lighting, that you can't get through the standard apps for Philips Hue and Ikea Tradfri lights.

Philips Hue has the most features on offer, perhaps because it's been around the longest: there's a syncing app available that matches your lights to movies and video games, for example, and several apps produced by third-party developers too. The Ikea Tradfri have the least features to show, and are also the newest products of the three ranges here: they're more for the budget-conscious user with more basic needs.

We like the Ikea Tradfri, the Philips Hue, and the Lifx ranges very much: smart lighting really should be this easy. There are specific reasons why you might want to pick one range over another, though – the Ikea Tradfri lights are basic but they're also cheap. There are no colour options (outside the US) but they cover most of the tricks that smart lights are known for, whether that's remote dimming or timed activation.

At the top of the pile in many categories is the Philips Hue line. You get the widest choice of bulbs and light fixtures, the best and most advanced app, and the greatest choice of third-party apps and integrations. If you want to get really serious about your smart lighting setup then Philips Hue is probably the way to go – though these are also the most expensive products, especially when you consider the hub that you need to have.

Philips Hue isn't necessarily the best choice for everyone though. Lifx lights can work individually, connecting directly to Wi-Fi without the need for a hub, and they're capable of some rather cool tricks of their own as well – getting the colour of the bulbs to change automatically as the day progresses, for instance. There are also some cool night vision bulbs that the other two ranges can't offer as well.