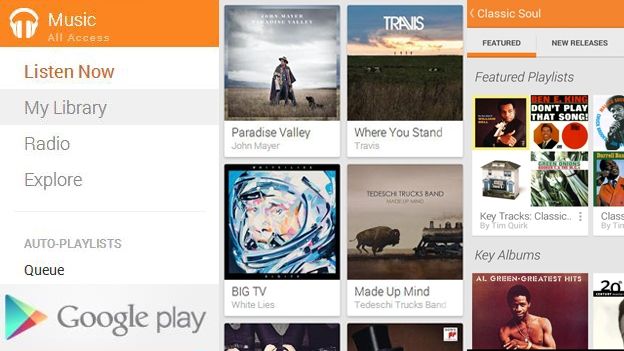 Google Music hasn't had the same reception as the likes of Spotify or Rdio, but it's packed with great music streaming features. Read on to see if Google Play Music could be the streaming service for you.

Combining an online storage solution for your personal music collection, a streaming add on and a digital music storefront, Google Play Music seems to have all the features required to make it big. Yet with competition from the likes of Spotify, Rdio and possibly a few months down the line, Apple, is Google's service the one to pick?

The basis of Google Play Music is its online locker, in which you can store up to 20,000 of your own tunes and then stream them, through the web player, anywhere you want. Think of iTunes, but completely cloud and browser based.

Uploading songs to the service is painless, though a tad time consuming. Similar to iTunes Match, Google's Scan and Match feature listens to a snippet of the song it's uploading and if it's in Google's 18 million plus library, it forgoes that process – simply using the version already available.

Now we get onto the interesting bit. Truly awful and tongue-twisting name aside, Google Play Music All Access combines your digital locker with Spotify style unlimited music streaming, to give you a pretty enticing service. For £9.99 a month –it's slightly cheaper if you sign up before mid September – you get access to millions of songs that can be turned into playlists and listened to as many times as you want.

A penny under a tenner is the same price charged by Spotify, but with that you do get a native app for your computer, along with browser streaming.

Currently available for Android, though an iOS version was announced at Google I/O, the Google Play Music app mirrors the browser experience onto your smartphone. It packs the same feature set, including the ability to stream and download your uploaded songs and bundle them all into your precisely crafted playlists.

If you're an All Access subscriber, you also get unlimited, ad-free access to Google's library of songs – which can also be downloaded to your device if you're looking to save data or listen on the tube.

As with the browser version, the app is fluid, bright and choosing songs is a breeze. Recommendations are also present, so you'll always have something new to listen to.

There are plenty of times when you scroll through you music collection and just don't really fancy listening to any of it, so Google has included a handy radio feature that creates a station of music it thinks you think. This type of thing is nothing new, iTunes has Genius and Spotify also has a radio feature, yet it is nice Google has added it. Available on both the app and browser, Google Music Radio is only for All Access subscribers, which ensures you can skip as many of those unsuitable songs as you want.

Apple is getting in on the whole personalised radio-station fad with their iRadio, which again streams certain songs to OSX and iOS devices. The difference is that you won't be able to cherry-pick certain songs, oh and it's set to be US only at launch.

The final quiver in the bow of Google Play Music is its music store, basically the same as the iTunes music store – allowing you to buy digital, DRM free music. Albums seem to be priced the same of the competition – around £7.99, though some new releases were also £4.99. Singles were also 99p, pretty much what is expected.

Google Play Music - Are you going to Play?

Google Play Music, along with the All Access add-on, seems a pretty strong prospect, especially with the mix of combining your own tunes with Google's big library. The well designed, slick browser and mobile application, paired with the good selection of music equate to Google Play Music being a well-tuned opponent for the likes of Spotify and Apple. However unless you're the proud owner of an Android phone, like the HTC One or Nexus 4, this service will only be useful on your computer, dramatically dampening its usability.

Fancy giving it a try for yourself? Google are currently offering a 30-day free trial of the service.