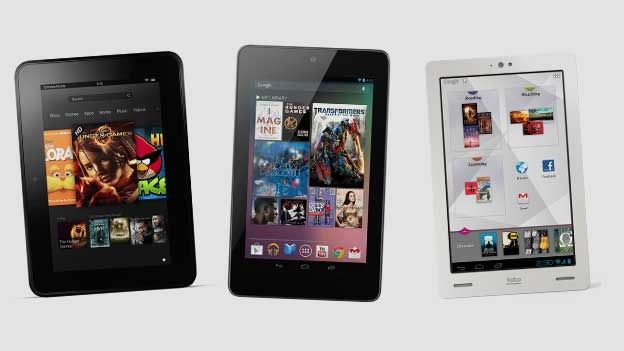 Google Nexus 7 vs Amazon Kindle Fire HD vs Kobo Arc. It's battle of the cheap Android tablets as they tussle to become the best iPad alternative

The 7-inch tablet market has instantly just got alot more crowded. After the recent arrival of the premium Google Nexus 7 with its sub £200 price tag, the Kobo Arc and the Amazon Kindle Fire HD are set to make the battle for slate supremacy a more interesting one.

Already blown away by the ASUS-built Nexus 7 and its ability to consume media at ease with the significant power under the hood, we square the 7-inch tablet trio up against eachother to see who comes out on top in the specs department. It's time to do battle...

Google Nexus 7: With its sleek front and dimpled back the Nexus sits comfortably in your hand. Measuring 7.81” x 4.72” x 0.41” and weighing in at a tiny 340g the tablet is definitely hand-friendly.

Amazon Kindle Fire HD (7-inch): Maintaining the same BlackBerry-esque looks, the Fire HD is lighter than the original Kindle Fire weighing in at 395g but goes from 8.8mm to 10.3mm thickness.

Kobo Arc: Matching the Nexus with its 7 inch 1280 x 800 HD screen it also carries 215 ppi and durable glass to withstand scratches, bumps and those accidental drops.

Google Nexus 7: With a powerful beast of quadcore, Tegra 3 processor this packs a punch. 1GB RAM doesn't hurt either.

Amazon Kindle Fire HD (7-inch): Under the hood you'll find a OMAP 4470 dualcore chip and a SGX544 graphics engine which Amazon claims runs faster and better than the Tegra 3.

Kobo Arc: The Kobo matches the 1GB RAM and although it doesn't have quite as much power it has a 1.5 GHz duel-core processor for stamina.

Amazon Kindle Fire HD (7-inch): The HD sports a front-facing HD camera but Amazon has not revealed details of the quality of the image sensor.

Amazon Kindle Fire HD (7-inch): Running on a skinned version of Android 4.0 Ice Cream Sandwich, Amazon has made the user interface truly its own with its own Silk browser promising faster performance from the version on the original Kindle Fire

Google Nexus 7: There is kind of where the Nexus 7 comes up short with all content only available from the Google Play store, which in the UK particularly still lacks Google Music and the ability to buy magazines.

Kobo Arc: With access to content through Google Play, you can also access the Kobo Bookstore which has 3 million books, newspapers, and magazines. 7Digital and Rdio apps are preloaded to add music streaming

Google Nexus 7: Wi-Fi only, there is also Bluetooth on board while the built-in NFC chip will support the ability to transfer music and video to speakers, docks and similar devices

Kobo Arc: There's WiFi and Micro USB support while Wi-Fi Direct means you send multimedia to a TV. You well however need an adaptor for that.

Google Nexus 7: As devices flaunt bigger screens and are expected to handle more, users are beginning to notice how short a battery life can be. Fear not this beauty will see you through the day with a battery life of 9.5 hours.

Amazon Kindle Fire HD (7-inch): Expect around 11 hours of battery life which of course depends if you are watching non-stop HD videos, or simply browsing the web

Kobo Arc: Similarly the Kobo uses its juices well with a slight upper hand of a 10 hour battery life.

Which 7-inch Android tablet are you impressed by the most? Let us know your thoughts in the comments section below.