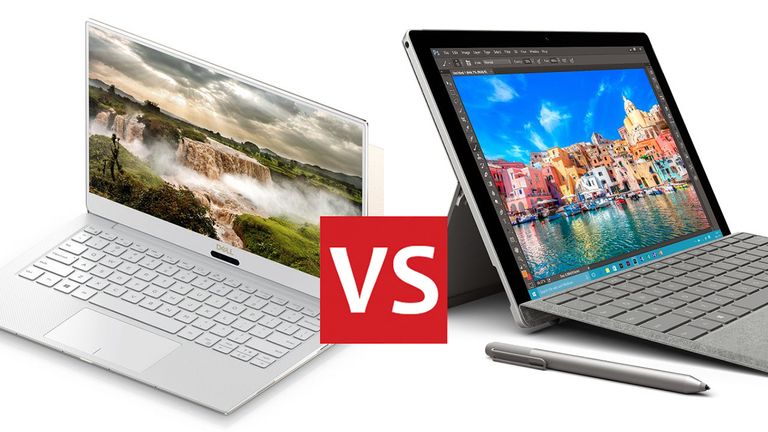 Picking your next computer isn't always easy – there are so many fantastic devices out there – but we're here to simplify your tech buying choices. In this particular instalment, we're putting the Dell XPS 13 laptop up against the latest Surface Pro from Microsoft.

Both excellent choices, both packed with power, but which one is the right one for you? We'll weigh them both up in terms of the design, the configurations you can get, and the features each one offers, so you know exactly what you're getting in return for your money.

Both these devices are among the most sleek and stylish in their respective categories, but they each take different approaches to their design: the Dell XPS 13 is a conventional laptop, and the Surface Pro is a super-powered tablet that can turn into a laptop when you clip a keyboard to it.

Straight away, then, you're choosing between something that can switch into a tablet mode and something that can't, so think about how you're going to be using your device in the future. The weight is affected of course – the XPS 13 starts at 1.21 kg (2.67 lbs) while the Surface Pro starts at 768 g (1.69 lbs), without its keyboard.

The Dell XPS 13 has a 13.3-inch touchscreen, with either a 1920 x 1080 pixel resolution or a 3840 x 2160 pixel resolution – and that 4K option includes a touchscreen too. We like the thin bezels on the side of the screen, plus the white alpine colour option (alongside the standard black). It'll be the envy of everyone in your local coffee shop.

Meanwhile the Surface Pro isn't quite so elegant in its appearance, but will still attract some envious glances from anyone who sees you with it. You get a 12.3-inch touchscreen display with a 2736 x 1824 pixel resolution, and it works with the Surface Pen stylus – though that is a £99.99/$99.99 extra.

Both Dell and Microsoft give you a choice of configuration options when it comes to your new computer, and these options change fairly regularly, so it's a good idea to check in on the official websites to see what's available. We'll summarise the main options here for you – remember the higher the spec, the more you'll have to spend.

The Dell XPS 13 can be yours with a choice of 8th-generation Intel i5 and i7 processors, 8GB or 16GB of RAM, and between 256GB and 1TB of storage, depending on your needs and budget. Intel UHD Graphics power the visuals, so this isn't a machine for gamers, but should easily cope with photo editing and some light gaming.

As for the Surface Pro, you can choose an m3, i5 or i7 7th-generation processor from Intel to power everything, depending on how much you want to spend and how much performance you need. That can be paired with 4GB, 8GB or 16GB of RAM, and from 128GB to 1TB of storage space for all your files. Intel UHD Graphics is again used, except for the top configuration, which uses the slightly superior Intel Iris Graphics instead.

The fact that the Dell XPS 13 uses newer processors gives it a slight edge, but the Surface Pro has a wider choice of configurations, especially at the lower end. At the top end, it can offer graphics performance just a touch above the Dell laptop. Neither of these devices will let you down in terms of performance, however.

As we've already mentioned, the Surface Pro is primarily a tablet – quite an important feature if it's something that you think you're going to need. At the same time it means it doesn't have such a high quality typing experience: as good as the Surface Pro Type Cover is, it's still a clip-on keyboard (and costs £124.99/$129.99 extra), so the Dell might be better if you're going to be doing a lot of typing.

Both devices run Windows 10, so there's no difference in terms of the on-board software. They can both run Windows Store apps, as well as big desktop applications like Photoshop, and of course full desktop web browsers. Anything you want to be able to run, the Dell XPS 13 or the Surface Pro will run it.

Thinking of getting some accessories? The Dell XPS 13 laptop brings with it two  Thunderbolt 3 ports, one USB-C 3.1 port, one memory card reader and a standard 3.5mm headphone jack. The Surface Pro, meanwhile, has a single full-size USB 3.0 port, a memory card reader, a Mini DisplayPort socket and a 3.5mm headphone jack. The Dell laptop just about edges it in the ports department.

The Surface Pro being a tablet, you do get an 8MP rear-facing camera as well as a front-facing camera, but you're not really going to start snapping pictures with a tablet... are you? Still, if you're out and about and don't have your phone with you, it might just come in handy.

Read our reviews of the Dell XPS 13 and the Surface Pro and you'll see they're both excellent devices that we like a lot. They're well designed and well built, they pack plenty of power under the hood, and they're both very much up there in terms of the best computing devices you can buy in 2018.

When it comes to comparing them against each other, the kind of specs you can configure them both with are along similar lines. You'll tend to pay more at each spec level for the more portable Surface Pro, especially with the keyboard added, but Microsoft's tablet does have more options at the budget end if you don't want to spend too much.

The easiest way to choose between them is by device type: if you want a conventional laptop, go for the Dell XPS, but if you need a tablet that you can also type on when needed, the Surface Pro is a better proposition. Remember it's only the 4K display version of the Dell XPS 13 that comes with a touchscreen.

If we had to pick a favourite, we'd go for the Surface Pro because of its versatility. If you're more of a conventional laptop person though, the Dell XPS 13 is hard to beat – and it comes fitted with the very latest Intel processors too.