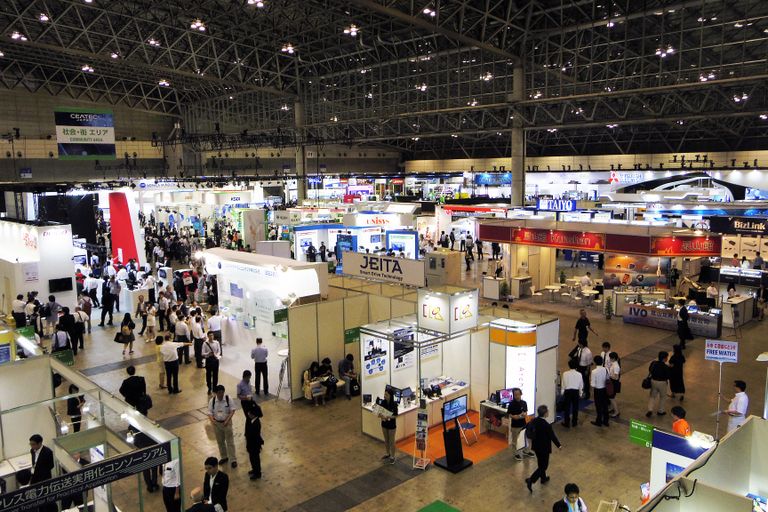 CEATEC, the Combined Exhibition of Advanced Technologies, is the most important Japanese fair of technology and innovation each year (still quite unknown in the west) and once more it has opened its doors. Naturally, T3 is also in attendance again on the show floor to discover and report in on the amazing upcoming technology of the near future.

If you follow us regularly on T3, you'll remember our 2016 exclusive coverage of this fair, where we showed off the first consumer 8K TVs - catch up now if you missed out (Day 1, Day 2 and Day 3).

The fair as always is held at the Makuhari Messe (the same venue as the Tokyo Game Show - if you missed our annual exclusive coverage then get up to speed now: Day 1, Day 2, Day 3 and Day 4)  which not only includes the heavyweights of the biggest Japanese companies and production holdings such as Fujitsu, Toyota, NEC, and Sony, who showcase here the new technologies that their R&Ds are working on and we will probably have our hands in five to ten years time, but also many German companies and CeBit's management participation.

It is no surprise that CEATEC is organised, financially supported and hosted by Prime Minister Shinzō Abe's cabinet.

This year the theme of the fair is "Connecting Society, Creating the Future", this is because since our first coverage last year, CEATEC has since revolutionised itself as a "CPS/IoT" fair that will not focus anymore just on electronic domestic appliances, but also 'Augment Reality' services. This shift is to to help realise the '4th industrial revolution' that, according to Abe, will start in 2020 and, thanks to all the patents registered here, Japan will lead the way.

For those who've never heard of these technical acronyms: CPS stands for 'Cyber-Physical System', and IoT stand for as 'Internet of Things'.

So CEATEC's mission is to reshape and redefine - through the Japanese companies' R&Ds - the society in all its aspects, with new services not only on a technological level (example: 8K TVs), but also its surrounding environment (example: droids driving cars, or helping to work, study and/or take care of children), and security tools (example: social facial control, and droids used as public officers).

Going around the booths, 8K TVs are now everywhere and the quality is stunning compared to 4K TVs (not to mention with Full HD TVs). The scary truth is that while the west is still not fully caught up with adopting 4K TVs, in Japan 8K TVs are already everywhere.

But we all know that the official event that will boost the mass selling of this new technology will be, obviously, the upcoming 2020 Japanese Olympics, for which NHK (the national BBC of Japan) will utilise both its 8K broadcasting and prototype 100"-plus 8K TVs to showcase the technology to the world.

The robots are coming... and they're rather scary

But 8K is not the only attraction this year (even if for us at T3 having one in our hands would make it so!), while robots of every kind are still present here, it seems like that compared to last year, the improvement in most of them has been in a jump forward in terms of development of the internal AI, and implementation of 'practical use' in the domestic environment (example: looking after children).

Saying so, I am referring specifically to Panasonic's 'Cocotto'.

At a first look it may seem a robot from a cartoon (or anime to be exact, being from Japan), but we are talking about a real android with such sophisticated functions that it is expected very soon to compete (if not surpass) a real baby sitter.

But the most impressive and, honestly, more frightening of these robots are the 'Mekamons', crab-like robots that seem to have been taken directly from Masamune Shirow's Ghost in the shell sequel, and can be used for 'other' tasks!

Controlled by a simple smartphone, Mekamons terribly remind us of the worst robot enemies seen in years of anime, not just for their design and structure, but also for their versatility (if modified they could easily climb, jump, and fly anywhere, and everywhere).

See with our own eyes.

And this is just an example of the 'Integration of Things' combined with the Cyber-Physical System, where these Mekamons mix robotics with augmented reality. Another improvement is KDDI's Drone, who demonstrated a "new/ improved" version of a normal drones, but in this case with two real arms!

Just imagine what KDDI's (the Japanese Vodafone) drone version can do with them.

As soon as we saw it we were reminded of when many intelligence services warned about the future use (and abuse) of drones. Take a look at this video right here of a drone firing a real gun while flying:

The intriguing ping pong machine that calculates in real time the reflexes of the player, and takes in real time counter measures, is a good example of how OMRON's R&D is looking at ways of integrating such autonomous technology into, say, driver-free cars.

Speaking of which, Tesla is also in attendance this year.

Artificial Intelligence - integrated with cloud technology - with the continuous exchange of data with a server is the new frontier for many many companies, and it is on this that most are experimenting. It is a huge shift.

To make a comparison with the past, the actual technological shift is like 100 years ago - in the 1920s - when most companies of the day were trying to figure out how to exploit successfully the widespread usage of electric current at home for the normal customer, a movement that led to widespread domestic appliances like radios, fridges, gramophones and - eventually - TVs.

Now AI empowered by the Cloud can bring augmented reality experiences, plus other "virtual remote control" services like we've gotten used to in many movies over the past 20 years (examples: Matrix, V for Vendetta, etc..), and that can affect our "real" life.

A clear example of what I am talking about is the NEC's "Watch" 1st control service in the world - improved even this year - that now can trace anybody, anywhere, in any moment just with its own camera eyes, and in just a few seconds! Since last year the research of a single person between millions of others took only -66 milliseconds less than the year before (enough said!).

With a widespread technology like this, any crime in the future would have no time even to be committed, almost like what is depicted in Spielberg's 'Minority Report'.

For sure the  criminal's career will  no longer be available, apart from if they get a facial transplant, as seen on Philip K. Dick's 'Total Recall'.

VR is alive and kicking

Next up we have VR, which despite having a really tough time of it in the west over the past six months, is still alive and kicking here at CEATEC 2017. Above all the experiments we've seen here today, there is only one that at the moment we feel can be really successful on the market, and that is without doubt Lenovo's "Star Wars: Jedi challenges".

Naturally, there is also a talking anime robot!

Last but not least, the Mobile Suit Gundam RX-78's 'HARO' (the real name is 'Hello' because it is transliterated from the Japanese Katakana alphabet) the mini robot of Amuro Rei - the main character of the first series - is at CEATEC 2017, brought by Bandai-Namco Group. It is super faithful too!

All the details are real and extremely well done (see the little hands!), the voice has been sampled (probably from the original TV series), but sincerely - from what we've have seen until now - the movements are still quite minimal, so when compared to Panasonic's counterpart 'Cocotto', it is definitely still in a prototype stage.

What does it do?

It talks about the Gundam of course, its own anime series in which it takes part!

Ok, for today that's all folks!

See you tomorrow for the second day of coverage from CEATEC 2017.