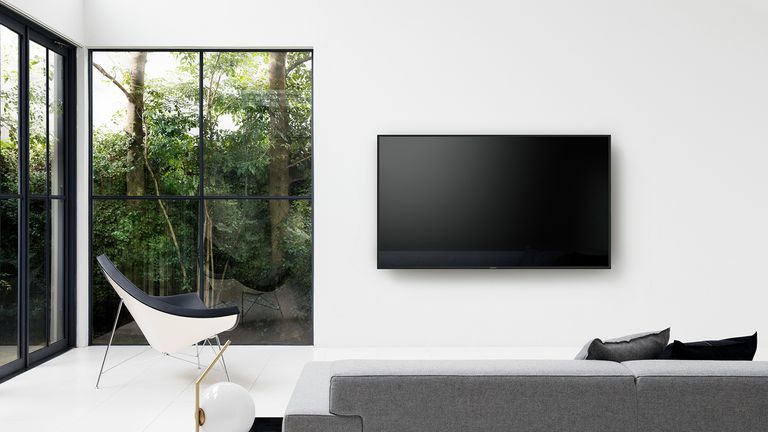 As a result, even the 'entry-level' 65-inch model is not going to be cheap, but whatever the screen size, the ZD9 is a hell of a lot of telly for your money. Those looking for more understated but equally excellent visuals might find themselves more swayed by its OLED sibling, the Sony KD-55A1 or its 65-inch big brother.

The ZD9 is a bit of a show-off's telly, not that there's anything wrong with that, but Sony just about keeps it classy. The screen has an ultra thin slate bezel, trimmed with a faux gold strip, and unpretentious pedestal stand.  The rear panel sports a neat pattern which helps disguise the various pop-off panels used to hide connections and cable management.

The set has four HDMI inputs, all HDCP 2.2 compliant; however only inputs 2 and 3 support 4K 60p, and 3 is also the ARC connection. This rather limits system options if you’re not coupling the set with a 4K AV receiver. There's also Scart and component if you really need them, a digital optical audio output and wired ethernet as well as Wi-Fi, for network matters.

This premium vibe is only let down by the remote control, which is a fairly horrible, rubber-buttoned clicker.

Hands up, the ZD9 is a breathtaking beast. When it came out in 2017 it was right on the cutting edge of what LED tellies can do, and a steady stream of firmware updates have kept it near there, even as 2018's tellies start to appear in the shops.

The only down side to that is we're still not seeing any amazing TV deals on the ZD9 at this point although the RRP has come down from its Alpha Luxe launch level.

Capable of extraordinarily dramatic images, this 65-inch ZD9 pushes the envelope in terms of realistic HDR, while copious fine detail and texture is unlocked by Sony’s X1 Extreme HDR processor. The latest firmware update has added support for Dolby Vision from streaming services, and broadcast HLG. They join the industry standard HDR10.

The ZD9’s black level accuracy is largely due to its Backlight Master Drive. An unspecified number of precision calibrated LED lights, controlled by a unique lighting algorithm, allow the screens backlight to react with astonishing precision.

Picture modes are many and varied. You can choose from Vivid, Standard, Custom, Cinema Pro, Cinema Home, Sports, Animation, a trio of Photo modes, Game and Graphics.

The Standard setting is ruthlessly revealing, and as such my recommended go-to setting.

Of the two Cinema modes, Home pulls out more detail than Pro, and is generally the better option. For example, when Electro goes nuclear in Time Square on The Amazing Spider-Man 2, UHD Blu-ray, the lens flare, billboard lights and the blue-man himself are ravishing.

But the ZD9 doesn’t just look dandy with native 4K. It does a cracking job with HD sources too, using Object-Based Remastering to give an HDR-style lift to SDR content.

Motion handling is above average. Of the various Motionflow settings, Clear is our choice for fast-moving sports, while True Cinema keeps movies looking suitably filmic.

Unlike the A1 range, Sony's flagship LED set makes no clever provision for audio. That said, the two downward firing stereo speakers have enough volume and clarity to satisfy everyday viewing.

Recently updated to Android Nougat, the set’s TV OS is still something of a mixed bag. The platform remains cluttered and prone to weird error messages, but functionality is high.

Integrated streaming services include Netflix and Amazon Prime Video, both with 4K HDR streaming support, plus Youtube and lesser options. A YouView overlay opens the door to a full complement of mainstream catch-up, accessed via the rollback programme guide.

The ZD9 has a generous 8.2GB of internal storage for app and game downloads. There’s also voice interaction with Google Home and Amazon Alexa.

The screen remains one of the few to still offer 3D. Two pairs of active shutter glasses ship in the box, and 3D effects are excellent. Dimensional pictures offer pronounced depth with minimal ghosting and no flicker. Great news if you have a collection of 3D Blu-rays you want to continue to enjoy.

I rate the Sony ZD9 as a 4K HDR TV for picture quality connoisseurs. Firmware updates continue to keep it at the forefront of image performance, enabling it to more than hold its own against the very best from rival brands.

If you want HDR brighter than anything available from OLED, then it literally demands to be seen. Aside from the cheap remote control, it’s also beautifully built and finished, as it should be: being the jewel in Sony’s LED LCD crown, the ZD9 is seldom going to turn up in T3’s list of bargain buys.

Viewed as a premium, flagship screen, however, the ZD9 – at least in its ‘smaller’ 65- and 75-inch guises – offers good value for your admittedly large sums of money.