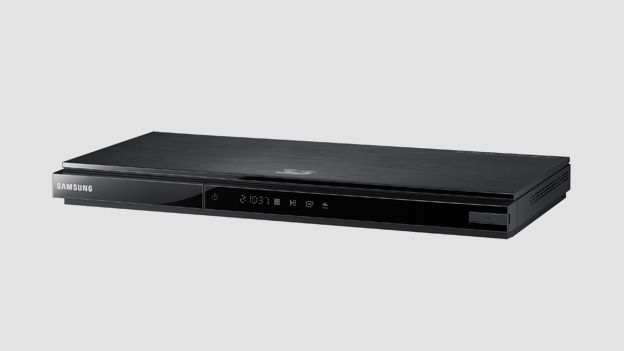 Being a budget player, the BD-D5500 lacks the solidity and swagger of pricier Samsung Blu-ray players. The bodywork is light and a little flimsy, while the all-black boxy casing just doesn't wow in the same way as the Samsung BD-D6900. Yet this deck retains the clever touch-sensitive control panel that compresses all the buttons into one area. It's also impossibly slim.

The fascia also sports a USB port, while on the back are HDMI v1.4, component, composite, analogue stereo and optical digital audio outputs, as well as an Ethernet port and a second USB port solely provided for the Samsung WIS09ABGN Wi-Fi adapter. The lack of on-board Wi-Fi is the first evidence of cost-cutting.

It's worth buying the dongle though because Samsung offers a top-notch range of network features. Smart Hub alone will keep you entertained for hours, offering an ever-growing range of apps with big names like YouTube, Facebook, Lovefilm BBC iPlayer and BBC News as well as puzzles, games and stories that you can enjoy with the kids. It's presented in a gorgeous and intuitive interface, with clever tools that let you search for content and look up details about movies.

You can also stream your own content library from PCs and other networked devices thanks to the deck's DLNA certification. And with flexible format support that includes MKV, AVI, WMV, DivX HD, XviD, AVCHD, MP3, WMA and JPEG (also playable via the USB port) the BD-D5500 is already looking like a remarkable entertainment hub for the money.

The icing on the cake is the Samsung BD-D5500's 3D compatibility, a talent you might not have expected at this price. You don't get the 2D-to-3D conversion feature though.

Despite its budget price tag and underwhelming build, there's very little wrong with the BD-D5500's picture circuitry. The deck delivers excellent images from Blu-ray discs, be they 2D or 3D, and loads Java-rich discs in around 45 seconds, which is a tolerable wait.

Blu-ray movies look exceptionally sharp and textured, with no evidence of jagged edges, mosquito noise or other artefacts, while colours look deep and dazzling and also show no signs of banding or imbalance. Dark scenes are comfortable to watch thanks to the deck's solid contrast levels.

We can't fault 3D performance either – the BD-D5500 passes stereoscopic pictures to a TV without any problems, resulting in a believably layered and utterly absorbing picture.

When it comes to DVDs, the deck's upscaling is decent enough although the image tends to be a little smudgy in places, and with music, the thin sound betrays its budget price tag – but these are the only blots on an otherwise peachy landscape.

Those shopping for a Blu-ray player on a tight budget would do well to investigate the Samsung BD-D5500. Its feature list is excellent for the money, offering media streaming, Smart Hub and 3D compatibility, and pictures are solid, although the lack of built-in Wi-Fi and below par build quality are the inevitable sacrifices.