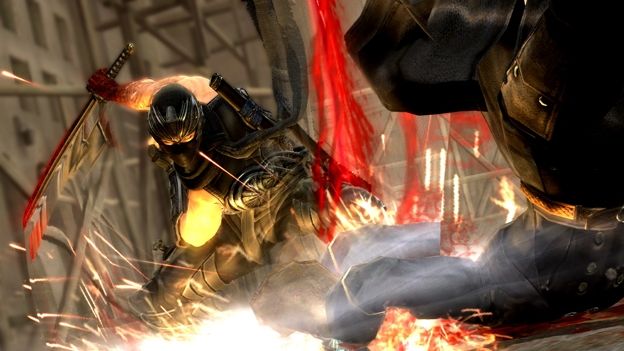 The long awaited Ninja Gaiden 3 has arrived at T3 Towers, but the latest iteration of Tecmo's famous adventure series has been hacked to a bloody mess...

Ninja Gaiden 3 is the latest in a long line of Ninja Gaidens stretching all the way back to the NES. What qualifies this one to have a '3' on the end?

We're not really sure. We got thrown off Ninja Gaiden: The Ancient Ship of Doom back in the early 90s and have spent the last two decades drowning in a choppy sea of Sigmas, Blacks and various other Ninja Gaiden 2s and 3s, none of which ever seem to make any sense.

In fact, we're not sure that Ninja Gaiden is, or was ever supposed to make sense. It just seems to be an accepted part of the franchise that the story is either non-existant or at best, wafer-thin.

There was a time when new Gaiden games would arrive with excuses as poor as their plots. 'We had a really good story, but it got left in the washing machine... and then the dog ate it.' Now they don't even bother making excuses.

And until now, no-one really cared. The most we needed from Ninja Gaiden in terms of a story was 'go here, and kill stuff on the way'. The aesthetic appeal and controller-busting, TV screen-shattering gameplay made 2004's Ninja Gaiden on Xbox and 2008's Ninja Gaiden 2 on Xbox 360 into instant classics, despite the plot deficiencies.

Ninja Gaiden has spent the last few decades carving its own niche, and acquiring a dedicated fan-base from way back in its coin-op days. Following Tomonobu Itagaki's exit from Tecmo Koei in 2008, it appears that the series will be taking a new direction and leaving its carefully nurtured hardcore crowd behind in favour of a wider gaming audience.

In fact, this game is so far removed from what Ninja Gaiden used to be, and indeed what it used to stand for, that outside of the main protagonist and master ninja Ryu Hayabusa, and the art on the box, you would be hard-pressed to recognise this as part of the Ninja Gaiden series. In fact, we'd rather it wasn't – if this game was a series spin-off then it would be much easier to stomach.

Combat is far, far less complex than in previous Ninja Gaiden titles. That's not to say things are easy, they are certainly easier, but if you crank the difficulty up then things can still get very hairy, very quickly.

In previous Ninja Gaiden games, an increase in difficulty meant that your foes became more numerous, and more intelligent, killing you easily if you so much as spent a millisecond thinking about making the wrong move.

In Ninja Gaiden 3, an increase in difficult means that your foes become more numerous, and... well, that's about it actually. Just larger waves of 'hand-picked', 'highly-trained' idiots in generic 'bad guy' militia uniforms.

Don't get us wrong, graphically the combat still looks nice, and each swipe of your katana (your only weapon, by the way) is greeted with a tsunami of blood and guts, as you would expect from Ninja Gaiden. But that's where the similarities end between this game and it's forefathers.

The combat animations are still visceral, and the 'steel on bone' slow motion sequences are nice, if a little overused. In short, the combat is still great to watch, but that's exactly the problem.

Most of the time, we felt like we were just watching this master ninja go to work. Occasionally it became apparent that we were supposed to press buttons to make him move around and slice things up, but it didn't really seem to matter which buttons we pressed.

There is a deeper combat system here, one that might be rewarding to players who want to use it. But in Ninja Gaiden of the past, a handful of basic enemies would destroy you if you didn't know what you were doing. Ninja Gaiden of today doesn't care, it just throws wave after wave of bad people at you and asks you to press buttons.

Chopping things up in Cooking Mama genuinely provides more of a sense of accomplishment, and at least you feel like Mama cares which buttons you press, in fact, she gets rather haughty if you don't get it right. We wish Ninja Gaiden 3 cared as much.

This is not so true of the boss fights that are arguably the best part of the single player experience. It's a shame then that they seem so few and far between. Perhaps this is because the action in between them is so monotonous that it feels longer than previous games.

Or perhaps its because the bosses are similar, but you spend time in between having to take part in unnecessary quick time event sequences.

We get the feeling that this game is really trying to gel everything with an immersive story, but it just doesn't work. The premise of Ninja Gaiden 3 is that Ryu Hayabusa will pay for all the people he's killed (we haven't been counting, but it's a lot).

The sword that has infested his arm causes him to feel the pain of everyone soul he's ever murdered, and the frustratingly limited (and equally terrible) voice acting attempts to give generic baddies a sense of individuality, reminding you before you slay them that you are taking fathers away from children, sons away from fathers, brothers away from... you get the picture.

Why doesn't this work? Well, because most of the enemies look pretty much identical, and because they all say exactly the same lines. Oh, wait... and because they all work for a terrorist organisation called the 'Lords of Alchemy' who want to EXPLODE THE WORLD. We have no sympathy.

This seems to be a large focus of the story, along with Hayabusa's newfound conscience, but it's failure means that the significance of the huge numbers of people you're killing is completely lost.

So you just keep piling through all these enemies, and occasionally you kill enough of them to make your arm glow red, at which point you unleash a whole load of glowy, red, arm-juice which decimates every enemy on the screen.

Unlike the more recent Mass Effect 3, Ninja Gaiden 3 gives you no options, but also provides no consistency to Ryu Hayabusa as a character. Even if you make a concerted effort to follow the story, you will struggle to keep up with the pace of the narrative, especially when its focus shifts in virtually every cutscene.

Aside from the single player story mode, there are a few multiplayer modes. The co-op is so easy in places it's almost a little patronising, but the general experience is solid although frankly, it's hard to get co-operative modes wrong. Almost everything is more fun with a mate.

The deathmatch multiplayer is much the same story, you can make it fun if you try really really hard, but the game makes no effort into helping you achieve standard multiplayer levels of merriment.

It feels very tacked on, with a notable lack of customization options and the whole thing is just very basic, and rather dull without alcohol. This game has an 18 certificate, so we're allowed to say that. Don't drink, kids.

Ninja Gaiden used to be the pinnacle of intensely tough, supremely challenging gaming. As a result, it was always a 'Marmite' franchise, some people simply did not want that kind of frustration and that was their right. But that didn't stop the likes of 2004's Ninja Gaiden and 2008's Ninja Gaiden 2 being timeless classics. The point is, they were not everyone's cup of sake, but they were still superb games in their own right.

Ninja Gaiden 3 is still not going to sit well with everyone. It won't turn people off with immense learning curves and downright cheap enemies like the old games. It might bring in a new generation of gamers, but none of them will find the same satisfaction in this version as there was in previous iterations.

For the record, we understand what Tecmo and Team Ninja wanted to do here. But we're instantly reminded of The Fly – the developers have, with the best of intentions, tried to combine Ninja Gaiden's unique qualities with a more accessible style of game. Unfortunately they've finished development and revealed a mangled mess of ideas that is neither fun, nor unique. Accessible it may be, but what's the point when all you're accessing is a turgid experience that has been seen a hundred times before?

Tecmo has taken everything that made Ninja Gaiden so unique, and so loved by its fan-base, and taken a katana to it. The overall experience isn't a terrible one, the game itself is solidly built and you won't come up against any technical issues. But this is undeniably a fall from grace for a franchise that had always set the bar so high.