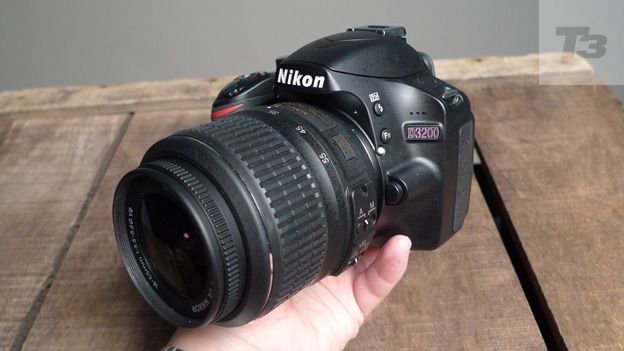 Update: The Nikon D3300 was announced at CES as the D3200's successor. The new camera features a series of performance tweaks including a newer processor, an expanded ISO range and a brand new retractable lens. Check out our Nikon D3300 review: Hands-on

Following on from its predecessor, the Nikon D3100, though not replacing it, the brand new Nikon D3200 has upped the ante for entry-level DSLRs, thanks to its show-stopping 24-megapixel sensor.

Going up against the likes of the Sony Alpha A65 and the Canon EOS 600D, the Nikon D3200 has got its work cut out when it comes to earning a place in our Best Digital SLRs list.

The D3200's lightweight chassis, which hasn't changed much in design terms since the previous model, weighs in at just 505g (with battery and memory card) which means that it never becomes cumbersome, even after carting it around all day.

At 125 x 96 x 76.5 mm, the chassis isn't too chunky, but still remains reassuringly sturdy and while Nikon makes no claims about waterproofing, the D3200 proved to be reasonably resilient to the elements when we tested it in the pouring rain.

The D3200 is available in conventional black or a shiny red finish, should you be so inclinded.

One of the key selling points on the new snapper is the guide mode. Enhanced since its inclusion on the D3100, this nifty feature is easily accessible via the top-mounted dial and holds your hand through the basics.

Teaching you how to set up a variety of shots, it even includes examples of how the pictures should look.

For example, one of the tutorials shows you how to get the best picture of a sunset by tweaking the white balance to capture the red tones. Follow the suggestions, alter the settings and the picture will change to reflect how the finished article will look.

There may be a few kinks to iron out (such as the overeager pop-up flash), but it's a damn good starting point for newbies.

Controls haven't changed too much since the previous model so you'll get the familiar top-mounted dial which is easy to use, but sturdy enough that it won't get knocked onto a different setting while at rest in your bag.

There are a couple of additions including the Live View button that lets you switch easily between the viewfinder and the LCD, making things a little more familiar for those stepping up from a compact.

What's more, there's now a dedicated video button so that you won't have to waste time wading through seemingly endless menus for fast movie capture.

The 3-inch (7.5cm) LCD sports an improved 921k-dot resolution which offers sharp images and a decent viewing angle. It might have been a nice touch to include a adjustable screen for shooting at awkward angles, but it's certainly not a deal-breaker.

Also, the colour reproduction on the screen wasn't the best we've seen so it's not always possible to get an entirely realistic idea of how your final image will looks, in terms of tones.

The D3200 comes with an EN-EL14 rechargeable Li-ion battery which will give you up to 540 shots, says Nikon. Battery life is excellent – we used the camera for a full day (and more besides) without needing to recharge or resort to a spare battery.

The powerful 24-megapixel sensor is great news for beginners as the top-notch picture quality means there's plenty of scope for cropping with minimal loss of detail, so even if you're framing has gone awry you should still be able to get good results.

There are also plenty of options for in-camera editing, such as straightening up wonky horizons, which is ideal for those learning the ropes.

The 11-point auto focus hasn't changed since previous models, although you can choose the AF point yourself (or just sit back and the let the camera do the work).

As we'd expect from the 24-megapixel sensor, not to mention the Expeed 3 processor that can be found on the brand's flagship models such as the Nikon D4, picture quality is superb, particularly for a starter-level snapper, while image noise is really only noticeable when the ISO setting is whacked up to full.

For wannabe movie makers, the D3200 offers a strong video performance, capturing 1080p footage at up to 30fps. Footage we shot was surprisingly clear and punchy, despite it being shot on a rather overcast day.

What's more, there's an external microphone input so you won't be plagued by pesky motor sounds picked up by the on-board mic - a small touch but something that's not available as standard on all rival models.

The Nikon D3200 is a little on the pricey side, almost edging it into the mid-range, but great if you're a DLSR beginner looking for a friendly camera that offers stunning picture quality. It's very slightly let down by the quality of the LCD screen, but there's little else to complain about here.

This is one of the best beginner DSLRs around with stunning picture quality and a friendly guide mode. It's not the cheapest, though.