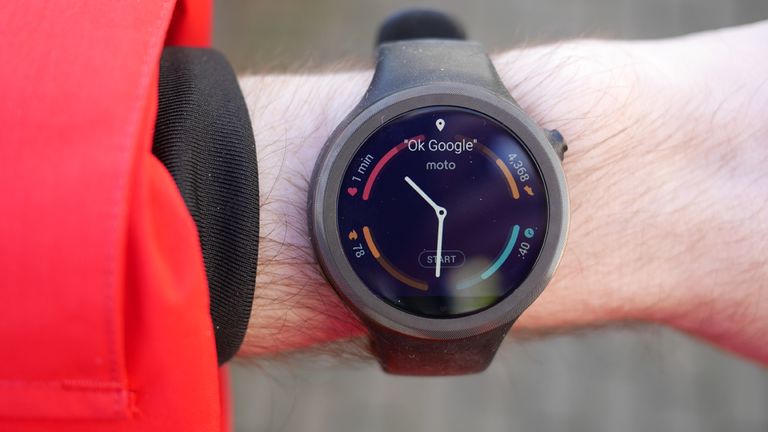 Moto 360 Sport took a bow beside the new Moto 360 back at IFA. And we were really excited about it, largely because it included both a heart rate sensor and GPS.

Why is that important? Well, theoretically it allows for more accurate fitness tracking, with similar capabilities to dedicated GPS running watches. That's exciting, as it's a first for a smartwatch.

Has Motorola managed to create the first hybrid running-smartwatch? In one word, no. But that doesn't mean it's bad, it's not. In fact, we really rate it, but it is slightly confused…

Let's take a look at a few of the complexities, shall we?

First off the name, 'Sport' suggests Garmin Fenix 3 levels of versatility (which can track running, cycling, skiing, swimming, strength training, to name a few), but the Moto 360 can only really track running (with planned updates from Strava and the like to come).

That's a bit of a shame, given the expectation on the watch.

There's also questionable accuracy, which can be important if you're training for a marathon. We found the GPS was actually pretty good, but the heart rate less so. That's not an issue exclusive to the Moto 360 Sport however, similar Android Wear devices suffer the same problems. It's clearly not going to be as accurate as your Polar chest strap.

Now, for most people that's not a problem - there are more non-athletes out there than athletes. But if you were expecting a proper workout companion, this isn't it.

Did Motorola really expect the Moto 360 Sport to challenge dedicated running watches? I'm not sure, and I don't really care.

Personally, I see the Sport simply as a different style option - if you dislike the faux-luxury dress watch style that Huawei, LG or regular Moto 360 offer, this is akin to a Baby G, or Casio. It's a weekend watch.

So how is it as an actual smartwatch? Pretty good actually.

It's well designed, the silicon unibody-strap is comfortable and inoffensive (but one of the biggest lint magnets I've ever seen).

Android Wear looks right at home (unlike on the much more expensive Tag Heuer Connected) and it functions just as well as every other Android Wear watch. Which is to say, pretty well.

It's not the perfect UI, there's too much swiping and tapping on screen, but it's not as fiddly at the Apple Watch OS. The number of apps and third-party watch faces is great, second only to Apple.

The hardware for the Moto 360 Sport is on par with most other high-end Android Wear devices. There's a quad-core 1.4 GHz processor, 512MB RAM and 4GB internal storage.

The screen is 1.37-inches with a pixel density of 263 ppi. But it's the screen tech that makes the Sport stand out. Named AnyLight, the transflective LCD adapts to the sunlight, automatically dimming to make it more readable in bright lighting. We found it worked really well.

The black bar is still present at the bottom of the screen, but for some reason, I found it less noticeable and less annoying than the regular model.

Battery life is as you'd expect from an Android Wear smartwatch, it'll last around a day and a half (two at a stretch). Using the GPS and heart rate sensor will, of course, drain it dramatically, but despite that you'll still have enough juice to last the rest of the day.

If you were expecting the Moto 360 Sport to be an all singing, all-dancing running-smartwatch hybrid you'd probably be a little disappointed. However, if you're simply looking for a decent Android Wear device, which is comfortable, and a more durable style than most metal/leather combinations, you're in luck!

The screen is surprisingly good, and the battery is okay. It's a good smartwatch.

We'll be reviewing the Moto 360 Sport as a running companion at a later date, stay tuned!