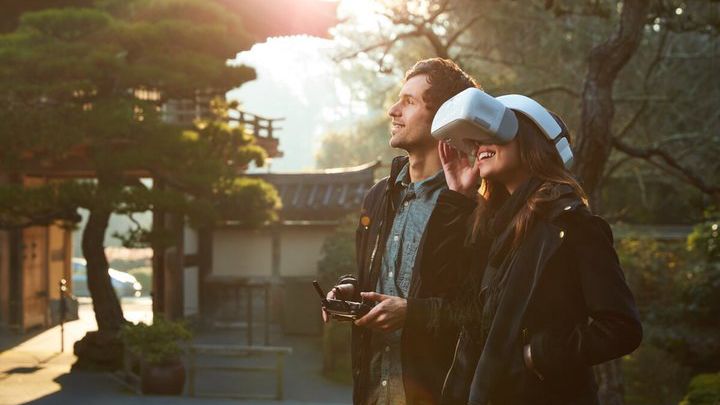 The DJI Goggles are here and they’ve arrived to make flying drones a more immersive and easy to control experience. They're going to be lots of fun too.

Owners of drones like the DJI Mavic Pro, Phantom series, Inspire series, plus third party devices, can use the DJI Goggles to see through the drone’s cameras in first person perspective. Not only that but you can even control the drone with simple head movements.

When in this mode, dubbed Intelligent Flight, the drone will automatically fly forwards and as you look around left and right it will steer in that direction. Trajectory is also automatically taken into account to make sure that using it in more complex environments is safe.

There is also a head tracking gimbal mode where your head movements can control the camera’s direction while the drone continues to be flown by stick controls.

Since all this is 360 degrees it means one person can fly the drone while another is strapped into the headset enjoying a virtual flying experience where they get to look around and be blown away by the views, like a passenger.

The DJI Goggles should last six hours on a charge, feature touch controls on the side for menu exploring and even work for those wearing glasses. They can also be used without a drone to enjoy 3D video experiences via the HDMI input and audio headphone out.

The DJI Goggles are available at the time of publishing for pre-order, in limited numbers, for £499.