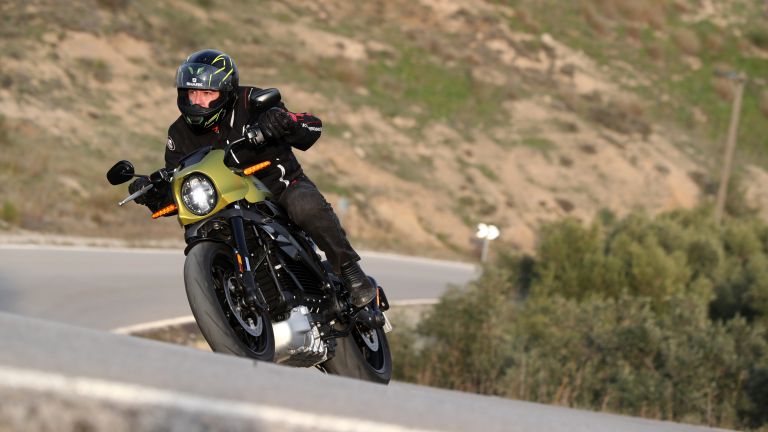 Dropping the right wrist on the Harley-Davidson LiveWire is a perspective-shattering experience. The future of motorbikes suddenly is right here, right now in the present, and the feeling it generates as you scream at the horizon is nothing short of symphonic.

And, for me, that horizon lies beyond a twisting mountain road near Antequera, Spain. I've been attending Harley-Davidson's 2020 launch event and, after riding a comprehensive selection of the brand's more traditional bikes, both on the road and off-road, we're finishing off the final day with a taste of the future, the all-electric bike that Harley-Davidson has spent the best part of 10 years creating.

As someone who, truth be told, does not have a strong brand affinity to Harley-Davidson, and who's perspective of the maker was very much rumble and leather, the LiveWire feels almost surreal, as if it isn't supposed to be here and certainly not with a Harley-Davidson badge on it. I think it fair to say that if you asked 100 people which motorbike brand would produce the first game-changing electric motorbike, then hardly any would plump for the famous American maker.

Which makes the leaning into a now widening bend in the road, tucking in to the LiveWire's sleek naked frame, hitting the exit line into the straight, and then absolutely gunning it even more spectacularly bonkers. I've ridden fast bikes before, and I think it fair to say that unless you are a track day fiend with a garage full of 200BHP plus hyper bikes, then the acceleration the LiveWire delivers (0-60mph in three seconds) will leave you breathless.

That impact is without doubt largely generated by the sheer amount of torque generated by the bike's Revelation electric motor (86 ft-lb), and the fact that that torque is all made available at any stage. As the bike has no traditional gearing, there's no having to run up to north of 120mph to get anywhere near peak torque — you just get it all, instantly.

The result of this is that when I first get on the bike and roll the wrist I fishtail the hell out of the LiveWire, with it begging to put the intense power down under my overzealous, used to lesser torque, unknowing hands. Within minutes, though, I get a feeling for the power this bike has to offer and can choose when to be so dramatic off the line. Horsepower sits at 105 / x78kW.

And, talking of dramatic, the LiveWire is all sorts of theatrical, both from its lack of sound when stationary and Tron Light Cycle screaming whine when it moves. Harley-Davidson has spent years, apparently, working on just getting this sound right, as with the lack of a noise-making combustion engine beneath you, and instead just the bike's electric motor connected to a 15.5 kWh Rechargeable Energy Storage System battery, when you engage the bike's power, you hear nothing.

As someone who is used to meeting up with friends to go riding, grouping up at biking cafes and being used to hearing the tick over of a large number of motorbikes engines when stationary, seeing a group of us sat on LiveWires and being able to hear nothing but the wind and ambient noises of rural Spain is markedly odd. Of course, it is how a bike sounds at speed that is the more important part of the riding experience, and as a fan of both sci-fi and advanced technology, this is where the LiveWire really nails it for me.

As soon as you roll on the accelerator the LiveWire's Tron Light Cycle-style whine begins to build. It's high-pitched but seems to carry a more volumous whooshing quality (like a jet engine) which, especially at high speed, synchronises perfectly in my mind to what this bike is and the performance experience it delivers. It made me feel like the pilot of a futuristic piece of military hardware and that, partnered with its outrageous acceleration, immediately placed the LiveWire right at the top of my wish list.

I slide through a series of tight climbing bends and it is here, where big speed is not possible, that I also realise that the bike actually feels very approachable and manoeuvrable. No one can say this bike is light, and at 230kg (509 lbs) it really isn't, however at no point did I feel it was heavy or unwieldy, both on and off the bike. I'm 6ft 2in, so I am hardly a small chap, so that is something to factor in, but I can honestly say I was surprised at how well the LiveWire handled and how perfectly normal its weight felt.

The tight bends end, opening up onto a plateau, and after dropping the lid a touch before a blink-and-you-miss-it overtake of three vehicles, the LiveWire screaming in my ears, making me feel like Maverick from Top Gun (they should've ditched the Kawasaki for this in the new film!), I pin it again and watch as my peripheral vision melts away into a high-speed blur of scrub and background scenery. My god this thing is properly fast! With the LiveWire you can firmly kiss goodbye to any lingering image of an electric bike as some gutless scooter.

And, the thing is, the LiveWire can deliver this sort of exhilarating, futuristic experience for around 95 miles of run time in a combined, stop-and-go situation, and up to 146 miles in a city riding environment. Now, don't get me wrong, if you rode this bike aggressively and made use of its stupendous acceleration and torque in maximum fun mode, you're almost certainly going to get less than that. But, and I don't know about you, I hardly ever travel more than 75 miles in one sitting on my bike, let alone 95 or 146.

And, as Harley-Davidson is keen to point out, the LiveWire recharges to 80% capacity in 40 minutes, and 100% in 60 with DC Fast Charge tech. For me, though, if I were to own a LiveWire, using it for my daily commute of 10 miles to work via the school run, and then back again, I am quite confident that I wouldn't even need to rely on Fast Charge to keep me range anxiety free and the bike always ready to go. Even a trip over to Fowlers in Bristol, my favourite biking store, which is a 35-mile round trip from my home, would still leave the LiveWire with three-quarters of its battery left. That's about 20 minutes back to full charge.

I think, what I'm trying to say, is that while obviously we all want longer range from electric vehicles, and faster charging times, I feel 95% of riders could easily operate a LiveWire without any issues in terms of range and charging.

So, overall, my experience riding the Harley-Davidson LiveWire in the hills surrounding Antequera was one that I not only thoroughly enjoyed but, as a rider of fast sports bikes, one that really opened my eyes to just how exciting electric motorbikes can be. It also proved to me just how much Harley-Davidson seems to be hell bent on powering into the future of riding with innovative new machines and technology, which is something I never thought it would've been on the forefront of.

The price of the Harley-Davidson LiveWire is clearly going to be sticking point for many right now, with £28,995 not cheap to anyone but those with very deep pockets. However, we love top, game-changing technology here at T3 (our name, after all, stands for Tomorrow's Technology Today) and we can safely say that the LiveWire is just that, so if you can afford it then it comes wholeheartedly recommended.

The Harley-Davidson LiveWire delivers a slice of the future of motorbikes today, and it does so (price aside), in my opinion, with very few real-world caveats.

For more information about the Harley-Davidson LiveWire, as well as the entire 2020 Harley-Davidson range of motorbikes, then head on over to the maker's official website.