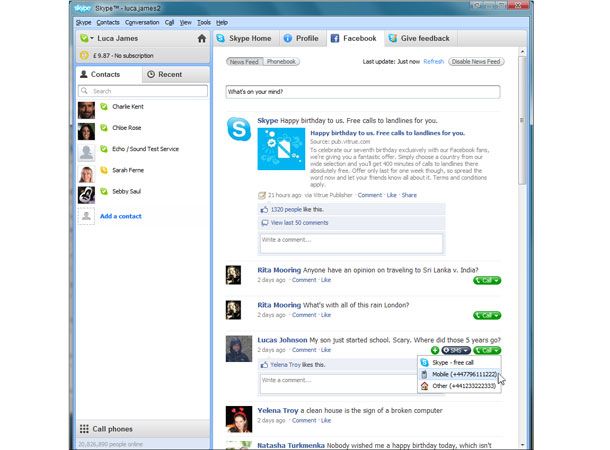 Are Facebook's privacy issues a concern for the new Skype 5 service?

Following the unveiling of Skype 5 with new Facebook integration, the VoIP service has spoken out over the safety of the social networking website refuting claims of privacy issues.

The new Skype 5 service syncs with users Facebook accounts to make getting in touch with friends even easier. However, last week's storm over Facebook's iPhone app showing users numbers of people they had never met, Skype has been forced to defend its Facebook phonebook integration.

“It's not something we're worried about,” Mike Bartlett, Director of Project Management at Skype told T3. “The default setting has always been private. It's easy to control it in your profile. We've always been pretty conservative when it comes to privacy issues.”

It seems the Skype Director of Project Management wasn't threatened by Gmail's recent addition of a plug-in enabling users to make phone calls either as Bartlett stated: “We welcome competition from Gmail,”

“It brings attention to what we've been doing for years, so you can see the full suite of capabilities we're offering. We're agnostic to whatever device or OS you're using, whereas Gmail is fairly limited.”

So what do you reckon? Will Facebook's privacy track record put you off syncing your contacts in Skype? Let us know via the T3 Twitter and Facebook feeds, if you can face the privacy concerns that is.