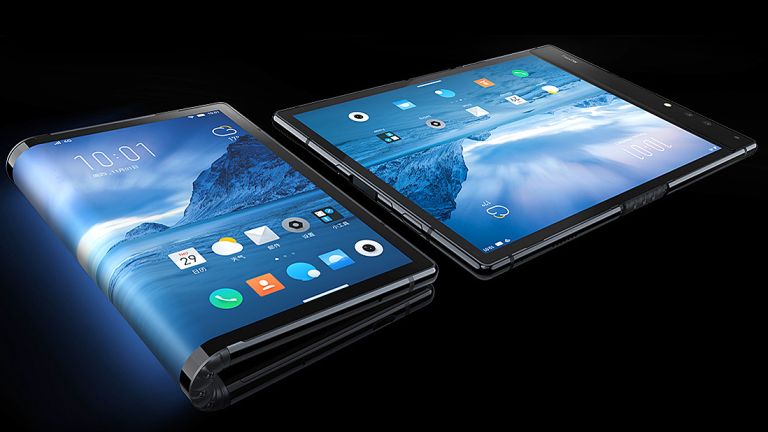 After months of drumming up excitement about its hotly-anticipated folding Galaxy X flagship smartphone, Samsung has been beaten to the punch by a small startup.

Californian technology firm Royole (don't worry, we hadn't heard of them either) has unveiled the first commercially available foldable smartphone. Dubbed FlexPai, the handset has a 4-inch AMOLED display that can be unfurled into a 7.8-inch tablet. You can watch a promotional video of the phone below.

Royole FlexPai is powered by Android 9.0 Pie, but the company has designed and built its own Water OS interface that runs on top. This software has been designed to intelligently switch between a tablet interface when the display is unfolded, to one more suitable for phones when it is folded.

According to Royole, you should be able to bend this smartphone in-half some 200,000 times without the hinge mechanism breaking. If those numbers are accurate, that equates to folding and unfolding the device more than 100 times a day for five years before the hinge starts to experience problems.

Powering the foldable FlexPai is the Snapdragon 8150 chipset, which has yet to be officially announced by manufacturer Qualcomm. The all-new flagship processor should offer faster speeds than the Snapdragon 845 we've seen in most high-end Android smartphones launched this year, including OnePlus 6T and Galaxy Note 9.

Royole has included a 3,800mAh cell inside the hybrid device, but while that may sound like a lot it's unclear how much battery life you'll be able to expect. After all, the battery is powering a 7.8-inch AMOLED tablet, not simply a smartphone and so it might not be as impressive as a result.

Elsewhere, there's a dual-camera system on the back of the phone that combines a 16MP main shooter with a 20MP telephoto lens with a f/1.8 aperture.

Interestingly, the same set-up becomes the front-facing camera when the FlexPai is folded-up into smartphone mode.

FlexPai ships in three different models – 6GB of RAM paired with 128GB of storage, while the other two boast 8GB of RAM and a choice of 256GB or 512GB of storage.

It's unclear whether this folding smartphone will enjoy a worldwide launch, or be limited to China. However, if the Royole FlexPai does make it to our shores, it'll likely cost the equivalent of £1,000 ($1,300).

“It perfectly solves the contradiction between the high-definition large-screen experience and portability, which introduces a whole new dimension to the human-machine interface. The phone’s inherent design will forever change the consumer electronics industry, as well as the way people interact with and perceive their world.”

Samsung is widely-tipped to launch its new foldable smartphone at CES in January 2019. The new flagship device, purportedly named Galaxy X, will have a similar industrial design to the Royole FlexPai that allows it to expand the available screen real estate by unfolding from a hinge in the centre of the smartphone.

From the official product video above, you could be forgiven for wondering whether the FlexPai actually exists. However, the tweet below from reliable tipster Ice Universe – who describes the smartphone as having a "very rough" design – shows the foldable handset in action in the real world.

This is the "world's first foldable screen phone" released by Rouyu Technology, which will use the Snapdragon 8150 processor, but its design is very rough, just to seize the "first", this is a futures product. pic.twitter.com/M0v9o2z0BwOctober 31, 2018

Royole FlexPai is available to pre-order at royole.com/flexpai.