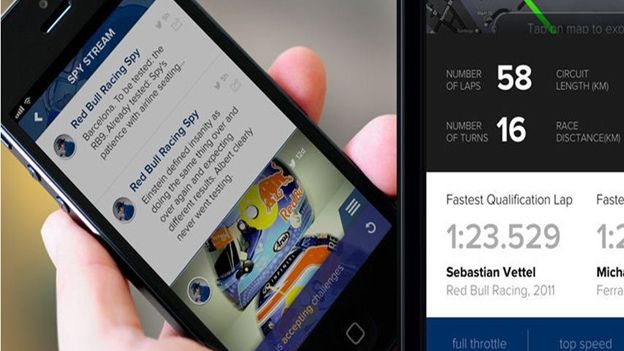 For the latest and best cutting edge F1 action and all the stats, download the F1 Spy app on iOS and Android stores now!

Best news of all though, is that your route to the current F1 world champions' man on the inside just got a whole lot easier with the launch of the Red Bull Racing Spy App for Android and iOS.

The Red Bull Racing Spy will bring you closer to the real action in Formula One. You'll get insider access and witty anecdotes, live lap-by-lap track positions and race stats as well as millions more F1 facts and figures. From the hard facts of the pitlane to the star-studded party circuit, this is your-one-stop-shop for the lot, all on your smartphone. So what are you waiting for? Download the app now and take the chequered flag of knowledge: Android and iOS.

Even more excitingly, you can get involved yourself – quiz the Spy with a tough F1 question and he'll get you answers. No matter how demanding or obscure he'll give it his best shot – an absolute essential for any F1 fan who wants that behind the scenes glimpse of the F1 lifestyle. Previous challenges have included taking cheeky snaps of Sebastian Vettel with headphones on, capturing two champions at once in one frame (tricky stuff indeed!) and sneaking pit lane photos from inside a pit crew helmet. It's all in a day's work for the Red Bull Racing Spy!

But wait, there's even more - we've teamed up with the Red Bull Racing F1 Spy to give one lucky T3.com reader the chance to win two pieces of signed merchandise by Sebastian Vettel and Mark Webber respectively! Simply head over to Twitter and tweet some interesting challenges during this weekend's race for the Red Bull Spy (@redbullf1spy) to carry out on and around the race track. The best challenge will win the goodies. Just remember to include the hashtag #SpySwag to enter. Terms and conditions apply. This competition is for UK residents only and runs from Thursday 24th October to midnight on Sunday 27th October 2013.