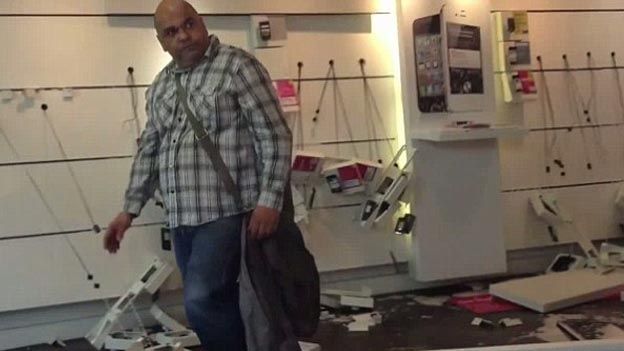 Not happy with your T-Mobile service? This mancunian has taken customer complaints to a whole new level. Watch the video below to find out why

As far as temper tantrums go, this is as shocking as they come.

An irate customer trashed a T-Mobile store in Manchester city centre on Saturday after apparently being refused a refund for a mobile phone contract.

Staff stood back in disbelief as 42-year-old Jason Codner began to systematically rip phone displays off walls and overturn furniture.

The middle-aged man, from Salford, also set off a fire extinguisher, while passers-by began filming his angry episode on their mobile phones.

Codner's shocking display was later posted on YouTube where it has already received nearly half a million hits!

He was later led away by five police officers and charged with criminal damage and public order offences. According to a statement released by the Met, Codner is due to appear in court on July 30.

A T-Mobile spokesman said: “The customer's dispute was in relation to a refund that we were not able to give - as it was clearly outside of the stated terms and conditions.

“We are currently assessing the damage, and will be re-opening the store as soon as possible”.

Watch the shocking footage below