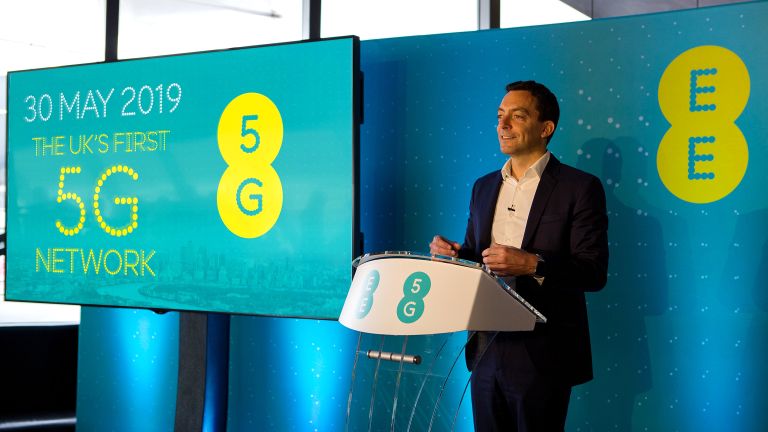 EE rolls-out its 5G network across a select number of cities in the UK today, May 30, 2019. This marks the first time a 5G network has launched in the United Kingdom, beating rival Vodafone's UK 5G launch by more than a month.

5G networks offers much faster speeds and lower latency than 4G. EE says that its new network will not replace 4G, but will work in unison with the existing network. As such, those who don't yet own a 5G-enabled phone will still benefit from the same 85% nationwide coverage and 4G speeds already offered by EE.

According to BT, EE and Plusnet consumer brand CEO Marc Allera, the company is still planning to actively invest in its 4G infrastructure to improve the service, as well as boosting 5G coverage and speeds across the UK in the coming years.

EE has more 5G-enabled devices ready to launch on its network than any other. Many of these smartphones are exclusive to EE, including the OnePlus 7 Pro 5G and LG V50 ThinQ 5G. EE is also the exclusive network partner for the Samsung Galaxy Fold, but that (understandably) still doesn't have a release date.

EE will focus on outdoors 5G coverage to start, before looking to improve indoor signal strength. As previously announced, EE 5G will start in four capital cities in the UK: London, Cardiff, Edinburgh and Belfast – plus Birmingham and Manchester.

EE expects customers to experience an increase in speeds of around 100-150Mbps even in the busiest areas. According to the network, some of its customers will break the one gigabit-per-second milestone on their 5G smartphones. For comparison, the fastest speed possible when EE launched 4G in 2012 was 50Mbps.

The BT-owned carrier will then roll-out 5G connectivity to some of the busiest areas in ten more UK cities later in the year – Glasgow, Newcastle, Liverpool, Leeds, Hull, Sheffield, Nottingham, Leicester, Coventry and Bristol. In total, EE plans to hit 1,500 5G-enabled sites across the UK by the end of 2019.

5G will be added to EE's recently-revamped pay-monthly plans. As well as access to 5G speeds, EE pay monthly customers that boast a number of new benefits, including free access to BT Sport, the ability to stream Apple Music, Tidal, Prime Video, Netflix and MTV without eating into your monthly data allowance. Dubbed Swappable Benefits, EE customers can chop and change between which bonus they'd like at any given time.

So, if you're playing to use your iPhone to power the Bluetooth speaker at summer BBQs – you might be inclined to pick the "Music Data Pass" to avoid incurring extra charges for streaming music all day and night on Apple Music, Tidal or Deezer. Or, if you're planning a trip abroad, you're probably going to want to switch over to the "Roam Further Pass" and take your text messages, calls, and mobile data allowance to the United States, Canada, Mexico, Australia and New Zealand – as well as the EU.

Swappable Benefits will be available on plans with mobile data allowances up to 100GB a month, known as "Smart Plans". These new benefits are also on top of any existing promotions from EE, including six months of free Amazon Prime Video, as well as three months access to BT Sport and six months free Apple Music, too.

Smart Plan customers will be able to access at least one Swappable Benefit at any one time. Switching between them is handled online or via the My EE app.

EE will not charge extra for its 5G network access when they launch next week. However, those on older plans might have to cough-up more to move to the new "Smart Plans" pay-monthly options, especially those with the biggest 5G data allowances. The same applies to 5G-enabled SIM-only plans, which are coming soon.

In August, EE will launch a new Gamer’s Data Pass available as a Swappable for all 4G and 5G Smart plans. If you pick this benefit, EE  will waive all the data customers use on a wide selection of games and services including Pokémon Go, Harry Potter: Wizards Unite and other exciting gaming titles, as well as to stream on Twitch.

The network has signed exclusive deals with OnePlus 7 Pro 5G, Samsung Galaxy S10 5G, Oppo Reno, LG V50 ThinQ 5G, as well as 5G hotspot devices from LG, and HTC. All of these 5G devices are available to pre-order from EE today.

Huawei’s 5G-enabled handsets have been “put on pause” at the moment, according to CEO Marc Allera, who said that customers need to have confidence that their new smartphones will be supported for the lifetime of the handset. So, don’t expect to be able to pickup a Huawei Mate 20 X 5G or Mate X on EE anytime soon.