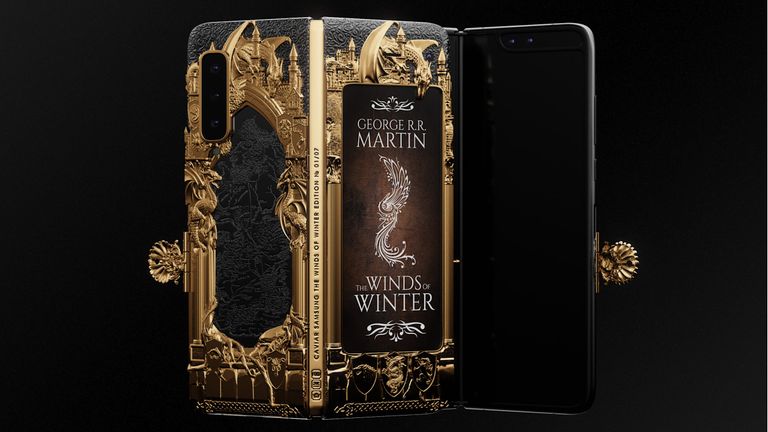 If you're feeling a little empty after the Game Of Thrones finale this week, we've got something to cheer you up. Russian jewellers Caviar has unveiled a limited edition Westeros-themed Samsung Galaxy Fold.

The foldable handset has been fitted with a new case to echo the next entry in the Song Of Ice And Fire book series written by George R.R. Martin upon which the Game Of Thrones show was based, dubbed The Winds Of Winter. The novel is expected to cover much of the same ground as the most recent seasons of the HBO show.

This is a very intricate design, with gold detailing covering the front and back of the design – complete with a small clasp to keep the folding smartphone closed.

Caviar has created seven different twists on the book-esque outfit for the Samsung Galaxy Fold – that's one for each of the Kingdoms of Westeros. The company said it was able to create the designs after obtaining a test sample of the Galaxy Fold.

It stated: "Caviar got a test sample of Samsung Fold and being inspired by its shape reminding a book, created a precious design dedicated to the most expected book of the modern time – 'The Winds of Winter', a missing part of the novels cycle by George Martin, which lies in the base of the 'Game of Thrones' series."

To drum-up interest in the Game Of Thrones-themed handset, Caviar has published a trailer on YouTube that reveals a close-up look at the design. Prices start from $8,200  (£6,481 converted) although the Russian company is throwing in shipping for free.

Pre-orders are due to open soon. However, the Galaxy Fold won't ship until Samsung has started to actually sell its all-new foldable handset. For those who don't know, Samsung pulled the Galaxy Fold days before pre-orders were scheduled to go live in the UK due to issues with the pliable Infinity-Flex OLED display in the first batch of review units.

Samsung has not confirmed how long the delay is likely to be, although it says it hopes to announce a rescheduled release date in "the coming weeks".