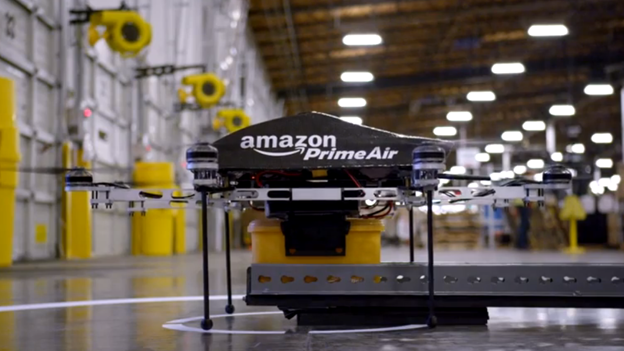 Amazon has confirmed that it is testing drones as a potential delivery method.

The drones, called Octocopters, will deliver packages to customers within 30 minutes of them ordering if Amazon goes ahead with its plan.

According to chief executive Jeff Bezos, the drones will be able to carry up to 2.3kg.

However, despite his enthusiasm for the drones, he has admitted it could be up to five years before they take to the skies.

The US Federal Aviation Administration has not yet approved the use of US airspace by civilian drones. It is in discussions to relax the rules, but a ruling is not expected until 2015 at the earliest.

Around 1,400 permits have been issued by the FAA over the past couple of years, mainly to police and government agencies.

The FAA's counterpart in Europe is not expected to clear civilian drones in the EU's airspace until the following year.

“I know this looks like science fiction, but it's not,” Mr Bezos told CBS television's 60 Minutes programme.

“We can do half-hour delivery… and we can carry objects, we think, up to five pounds (2.3kg), which covers 86% of the items that we deliver.”

The service would be called Prime Air – an extension of its premium Amazon Prime service.

Amazon posted a video on its own website demonstrating how the service would work.

According to one expert, the issue isn't a crowded airspace. It is the risk of the drones crashing into things – including each other – and falling on people's heads.

“The UAVs do not currently have the awareness of their environment to be able to avoid flying into people,” Dr Darren Ansell, an expert on unmanned aerial vehicles (UAV) from the University of Central Lancashire told the BBC.

"To deliver goods to people's homes for example in residential areas, the UAVs must overfly densely populated towns and cities, something that today's regulations prevent.

“Other things to consider are security of the goods during the transit. With no one to guard them the aircraft and package could be captured and stolen,” he said.