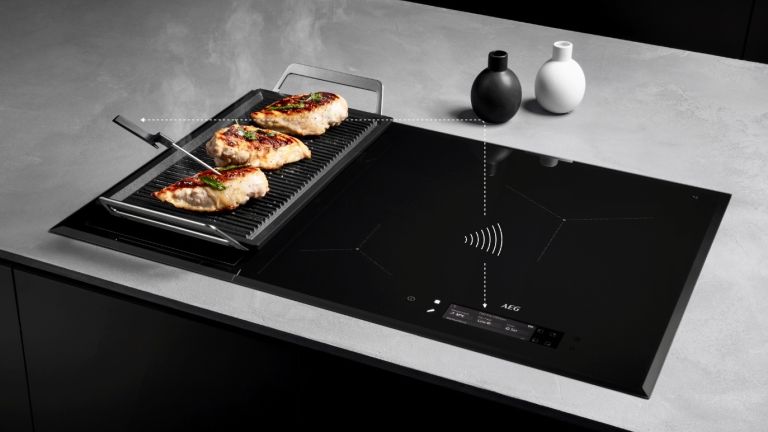 AEG is always coming up with tech innovations to add to its kitchen products, and that's why it's currently on top of our lists of best dishwashers and best washing machines. It's also long been at the forefront of driving the booming sales of induction hobs, not least through its sponsorship of events such as Taste of London, and now it's pulled out something extra special for induction lovers.

SensePro is a development of the innovative theme played by the AEG SenseFry and AEG SenseBoil hobs. For those unfamiliar with the idea of temperature probes, they are thermometers that you shove into, typically, joints of meat. They relay the internal temperature of the meat so that your roast can be cooked to perfection – whether your idea of perfection is medium rare, or cooked to the point where only dental records can establish what the meat was when it went in.

Making sure food is cooked correctly is a given, but it’s also something that many of us tend to be a little bit blasé about. It’s no good to just think that tasty chunk of chicken is cooked through based on what’s sizzling on the hob; you really need to check it’s actually safe to eat, but not overcooked.

This type of probe has been incorporated in numerous high-end electric ovens but AEG has now made it make sense as part of an induction hob, by making it, as noted, wireless (and battery-less).

The probe can give you pin-sharp temperature readings on all kinds of food, with a tolerance of +/- 1°C. The SensePro hob adjusts temperature accordingly, to make sure you’re getting optimal heat and the results you want.

It’s not just made for meat, as it happens. AEG says the probe is also perfect for checking larger vegetables – potatoes being the obvious example. These babies can often be trickier to cook than you might think, but you can expect perfect pommes de terre every time with the assistance of the mighty probe. The very precise and constantly updating temperature reading also means you can cook sous vide on the hob.

If you need to use larger pans, two cooking 'zones' can be joined together with just a touch of the 'Bridge' button. Once the larger zone is established, they then share the same temperature and time settings. A colour touchscreen control display lets you fine-tune your temperature settings with pinpoint accuracy.

The AEG Sensepro hob comes in a choice of two sizes: a standard 60cm model and an 80cm edition for those with more kitchen real estate.

Here's how it works. The hob emits a frequency, three times per second, that's received by an antenna in the food probe. Depending on the probe temperature, the frequency is altered and this new frequency is returned to the hob, which adjusts its temperature accordingly.

Induction hobs like this sleek new AEG model have come a long way in recent years and are now not only efficient but also allow a more natural way of cooking, thanks to extended cooking zones. They come packed with features and they’re easy to keep clean. It’s a perfect cocktail for kitchen harmony, just as long as your pots and pans are of the ferrous metal variety.