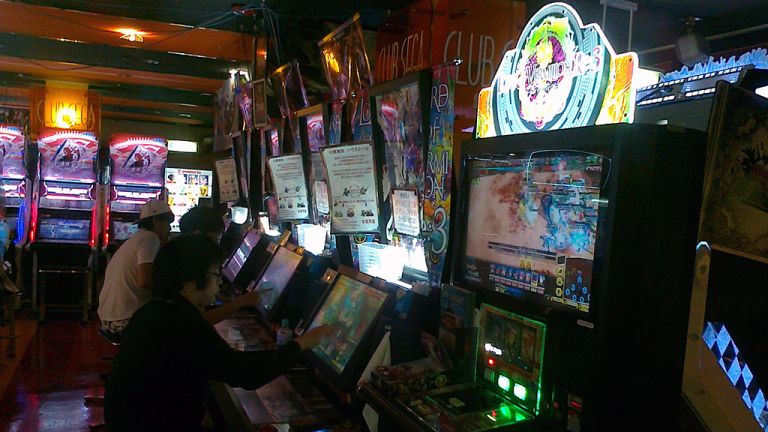 Last month we spoke about visiting one of the most historic and beautiful arcade centres ever created in Japan, and how the console market (i.e. PS4 and Xbox One) is shifting to our smartphones and tablets.

Today though we come back to the now - we are going to talk about the present Japanese arcade scene, notably with one of the most important and prolific arcade games ever made in the last 10 years: Square-Enix's Lord of Vermillion.

It’s only the arcade game that has generated more than 4 billion yen (almost $40 million) since its release. A trading card game which we talked about briefly last year in which we explained the present situation of the coin-op industry (that is going pretty strong), and how it keeps making new records. Announced in its fourth revision at the JAEPO 2017, Lord of Vermillion (also know as LoV) is definitely the game of the moment.

But let's start from the beginning

While in Europe most still wonder why we do not see new arcade games in our amusement centres (transformed in the recent years in slot machine centres), in Japan the coin-op industry has evolved and keeps producing new updates and innovative games for hardcore and casual gamers.

At the moment one of the most successful is Lord of Vermillion.

Even though it has not been made by the leaders in this market (i.e. Sega or Namco), this RPG is incredibly well produced and made by a console veteran and a real maverick in the coin-op industry: Square Soft (merged in 2000s with they heyday 'Dragon Quest' best selling producer: Enix) nowadays Square-Enix.

Having bought Taito in 2005 for 67 Billion yen (around $69 million; at the time the arcade scene,  due to the PS2's console dominance and the large investments involved in the new trading card business was experiencing  some financial problems), the heyday banker and President of Square Yoichi Wada thought that with the know-how of the Space Invaders' company, he could launch an attack on the market and win.

And he did not fail! From the release of Final Fantasy’s DISSIDIA in the arcades on 26 November 2015, the intuition paid back, scoring good earnings (not as good as Lord of Vermillion), but a tangible proof that Wada made the right investment at the right time. Taito in Japan is the most well respected arcade manufacturer because it produced Space invaders, a game that in the land of the rising sun is second to none, even the iconic Puck Man (Pac Man in the west), which underscored compared to it.

Why would a successful software house in the console market risk so much, not just in terms of money, but also in terms of image, to invest in a so hard and crowded business? Simple, in hindsight, because the revenues with this nouvelle vogue of arcade games is so huge that the income of 10,000 copies of a brand new Final Fantasy title pale in significance compared to the earnings of the cash box of just one single month of these machines.

Lord of Vermillion, as all the trading card games, mixes the tactical/managerial side of game (that we usually find on PC), with a redemption aspect (i.e. to receive a material gift at the end of the match, which is unavailable at home). This allows players to create a personal collection of around 200 cards, which can also be traded with other arcade game players.

And it was this aspect that across Japan generated not just a cult following of the old, first generation gamers who played and collected the first card sets (the complete annual collection of 200 cards), but also of the new ones who look for, trade and pay for them to become incredibly powerful.

Last but not least these card sets are not just  for collection purposes, but to be used and played with, especially in tournaments held every year across the country, where the best hardcore players gather to win the annual championship with prizes and money - and, obviously, to win you really need to have all the best and most powerful cards.

Lord of Vermillion plays like many of Japan’s other trading card games (such as WCCF,  Sega's managerial soccer game) and is about the domination of a battlefield, as we used to play in Peter Molyneux's Power Monger.

The classic idea of play an RPG on Sunday with framed turns per side is here totally revolutionised.

Take a look to the video below and you'll have clear in mind what I mean.

The player starts the game with a starter kit, which includes a magnetic card in which the player’s data is stored. This data includes the player’s avatar (name, class, etc..) plus five random cards with which  you can decide to train your group to acquire skill and knowledge of the game, or, of course, to go directly to war.

The beauty is that with each game the player receives a brand new sealed trading card to collect and use at the next challenge.

At this point it is possible to choose between a local dispute or a network (national) fight.

If you’re thinking, I play these sort of games and would crush all comers, I must warn you that the level of the normal arcade game player here is REALLY high compared to the west. In just a few words it is full of Hardcore gamers who are EXTREMELY skilled and well informed (at the game centres there is a  monthly magazine called Arcadia that is not only given out for for free but also details new game techniques and explains how to use them. Of course, these are ONLY available in Japanese, so Japanese players have an elite advantage.

To see how skilled they are check out the below video, which shows a normal, non-elite player:

In a universe based on seven worlds, as the broken pieces of the magic stone called 'Vermillion' who has the 'Arcana', the magic power to rule as a God of all the worlds, the main purpose of the player in Lords of Vermillion is the conquest of the other six stone parts to become the God 'Vermillion' and to dominate over the rest and bring order and harmony (sounds familiar, eh?).

Simple and effective, the action of the game is simply FRENETIC, with a touchscreen used to point their fighter where to go and to cast specific spells on the table below. According to the frequency of the attacks though, they may need to be recalled (by moving them back and forth) by pushing the attack buttons again, so there is constantly something that needs to be done when playing. Seriously, after playing the game in the arcades, the speed at which the game runs can make you go crazy incredibly quickly.

That said, I played LoV and, trust me, it deserves its 300 yen (£2,50 GBP) per play. I believe it is the new revolution in the genre that, personally, I never loved before because of its extremely slow play time. This new, experimental, avant garde arcade spin on the classic formula though is incredibly addictive.

Last but not least, the illustrations of the trading cards are simply AMAZING. Square, since the first installment, called the mighty Final Fantasy artist's Amano to draw them and most of them are a real masterpieces. They are so beautiful that Square release books where you can see ALL the card art.

Why can’t I play this in the west again?

This is largely due to the fact that Sega tried to import the experience with its World Championship Football WCCF in 2005, but the massive royalty fee issues plus the initial expensive cost of each set of 4 or 8 cabs together (80,000~120,000 euros), brought arcade owners to see it as an expensive and risky investment, preferring instead to buy the more secure slot machines.

But at the same time we recently interviewed Sega's President (Part 1, and Part 2) and they are working to bring back the classic popularity to the west with titles such as Daytona 3, and also embrace new cloud technology and faster servers, so soon we too might be able to play new-wave arcade games like Lord of Vermillion, with arcade owners won over by the advanced technology and potential to make big bucks.

For more information about Lord of Vermillion, then head on over to the game’s official website now.

See you next time.