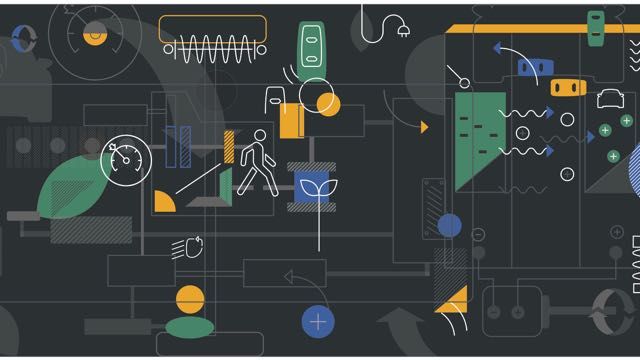 You've heard of terms like 'air dam', 'infotainment' and 'parallel hybrid', but do you know what they actually mean? T3 is here to demystify the jargon…

A version of cruise control that automatically brakes and accelerates the car to match the flow of traffic, without any input from the driver. This system is useful for avoiding collisions in the event of driver distraction – one of the most common causes of accidents.

An electronic system that's able to warn drivers of any pedestrians in close proximity to the vehicle.

This is a computer-controlled suspension system that uses powered actuators, instead of conventional springs and shock absorbers, to position a vehicle's wheels in the best way to deal with road disturbances, handling loads, and so on.

Where once this referred merely to headlights that moved as the driver turned the steering wheel, it now has a broader definition as technology develops and headlights take on more important roles.

Mounted beneath a car's front bumper, this spoiler is designed to affect the air flow beneath the vehicle. Air dams can reduce aerodynamic drag, increase the air flow to radiators and/or reduce lift.

The big buzz word of the moment, this refers to vehicles that can operate without direct input from a human being. Volvo is preparing to launch 100 driverless vehicles onto public roads as early as 2017.

A system that scans a vehicle's blind spot for objects, such as cars, pedestrians or motorbikes. If it detects something in a blind-spot area, it will inform the driver, usually via a visual clue such as a light.

Brakes that vary pedal pressure to hold a vehicle on the edge of lock-up.

It's not very techy, but we've included this anyway because it sounds cool! It's the name for that footrest found to the left of the leftmost pedal, that provides a resting or bracing position for the driver's left leg.

A hybrid vehicle that combines a diesel-powered engine with an electric motor, working together.

This refers to a hybrid vehicle that uses two drive systems, or 'modes'. The first mode runs purely on an electric motor; then a combustion engine will take over at faster speeds or during harder acceleration.

An electronically controlled system that maximises a vehicle's brake efficiency during emergency stops.

This is when an engine shuts off as the vehicle comes to a stop (such as at traffic lights), then restarts automatically when something happens (ie the clutch is depressed).

A computerised brain that oversees and regulates an engine's operation characteristics through sensors.

This refers to the average distance an electric vehicle can travel on a single charge. See the definition of 'range anxiety' below.

This refers to a propulsion system where two motors work together in tandem. For example, a petrol-electric hybrid would be a car that uses a regular petrol combustion engine mated to an electric motor.

This is a device that produces electricity as a result of an electrochemical reaction between hydrogen and an oxidant.

An amalgamation of 'information' and 'entertainment', this refers to a vehicle's navigation and stereo interface. Operation typically comes by way of a touchscreen, though many offer smartphone-app integration for remote control. The ability to search the Web is also common.

This is a system that recovers energy created during the braking process and stores it for use during acceleration. The technology is only just moving into road cars from Formula One, but expect to see much more of it in the coming years.

An onboard safety system that warns a driver when their vehicle strays out of its marked lane, using cameras and/or sensors. An LDWS usually employs some form of audio-visual warning.

Low-emission vehicle. Such environmentally friendly cars – and even zero-emission vehicles (see below) – are seen as the future. To promote their use, the British government is currently offering grants to people who drive them.

A shortened version of lithium-ion, this is a type of rechargeable battery that offers better performance than conventional rechargeable batteries such as NiCad (nickel-cadmium) and NiMH (nickel-metal hydride). Lithium-ion batteries offer a superior power-to-weight ratio, but are more fragile.

This refers to the use of infrared technology to provide added visibility when driving in the dark. Smart headlights on BMW's M4 concept use this tech to help avoid animal collisions.

The most common type of hybrid on our roads today, this is a vehicle that's powered by an internal combustion engine and an electric motor inline. Such cars can operate in full-electric mode, in petrol/diesel mode or in combined mode.

This is an electronic system that can either help park a vehicle or do it entirely by itself. Whereas once such systems could manage only parallel parking, they're now able to manoeuvre you into car-park spaces, and they'll soon be able to put your vehicle away in your garage, too.

A hybrid-engined vehicle that combines a petrol combustion engine with an electric motor, working together.

This is a method of assisting the deceleration of a hybrid or electric vehicle by switching the motor from drive/output mode to generator mode. This recharges the battery by converting a portion of the vehicle's kinetic energy into electric energy (see also: KERS).

Panic that occurs in the driver of an electric car when he/she realises they're low on battery charge.

A feature of a vehicle's electronic key fob or associated smartphone app that controls its ignition.

An electric vehicle containing a small petrol combustion engine, the sole purpose of which is to recharge the vehicle's batteries – the petrol engine doesn't drive the wheels directly. An example of this type of vehicle is the Chevrolet Volt.

Zero emission vehicle. The British government has stated that it would like almost all cars and vans in the country to produce zero emissions by the year 2050.