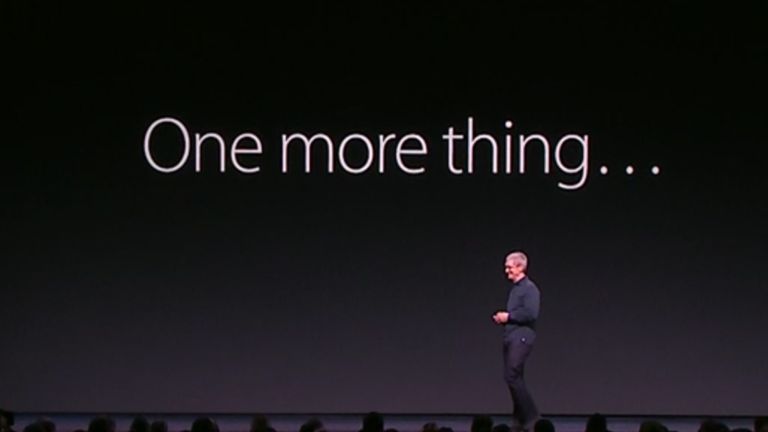 Not only that, but it even managed to persuade us that launching a radio station in 2015 is something we should care about.

It's easy to mock, and given Apple's love of taking on-stage digs at Android and at Windows, mocking is exactly what we should be doing. But such pilfering is actually very good for the people who end up using the products, and as long as it's done legally it's something we should be encouraging.

Window snapping was a very good idea in Windows 8, and it remains a good idea now it's turning up in OS X El Capitan - which is why we've been using third-party apps to provide it in OS X since those apps became available. The same applies to extreme low power modes, proactive digital assistants and all the other ideas that move from firm to firm - because of course this traffic isn't one way. Just go back and look at pre-iPhone Android for a vivid demonstration.

Isaac Newton famously said that he was standing on the shoulders of giants. Tech firms do much the same, although occasionally what they're really standing on is the toes of their rivals. Apple Music owes a great debt not just to Beats Music but to Spotify. Android would be hopeless and Samsung just another tech firm if it weren't for iOS and the iPhone. And Microsoft and Apple have been trading inspiration since Steve Jobs first saw GUIs at Xerox Parc.

And that's good, because taking an approach of NIH - not invented here - to ignore perfectly good ideas is madness. It's why Americans didn't get proper tyres until the 1970s, why Timex made a mess of the perfectly fine Sinclair Spectrum and why Apple stuck with a single-button mouse long past the point where doing so had stopped making any kind of sense.

Google Now is clearly much more useful than Siri. Having human curation probably will make Apple Music deliver a better service than Spotify's playlists do. Split-screen multitasking on the iPad Air 2 will definitely make it a more productive device. And so on.

What's interesting about Apple today, and about Microsoft and Google, isn't the individual features they're taking from one another. It's the way in which all three firms are essentially singing the same song. They want to be on your sofa and in your office, in your car and on your wrist, with you while you work and amusing you when work's done for the day. They want to store your data and media in the cloud and deliver it to any device, whether that's a laptop, a tablet, a smartphone or a watch.

They offer you an ecosystem where almost everything you do can be delivered by their products or services, often in the form of a surprisingly human personal assistant. And despite the odd hiccup, they deliver very polished products that you'll enjoy using and that can deliver real value if you climb into their warm embrace.

What differs, though, is their reason for doing it. Beyond all the PR guff about helping people realise their dreams and making the world a better place and making everything more awesome than even a Lego movie song could express, the three giants are singing the same song for very different reasons. The ultimate end, money, is the same, but the method of achieving it differs. Apple wants you to buy its very beautiful and very profitable devices. Google wants more of your personal data to analyse and mine for insight and ad targeting. And Microsoft just wants to be your friend and sell you some cookies.

Those reasons become more and more important as we get more and more products from the same people. If your watch and your phone and your PC and your TV and your in-car entertainment and your maps and your time management and your work devices are all from the same company, and the content you create and consume is stored and streamed by them too, and the people you live with use the same products and services too, you're not just buying a product. You're entering a long-term relationship, and just like real relationships that means deciding who you can trust with your most intimate secrets. We thought we were just picking products. It turns out we were picking life partners.