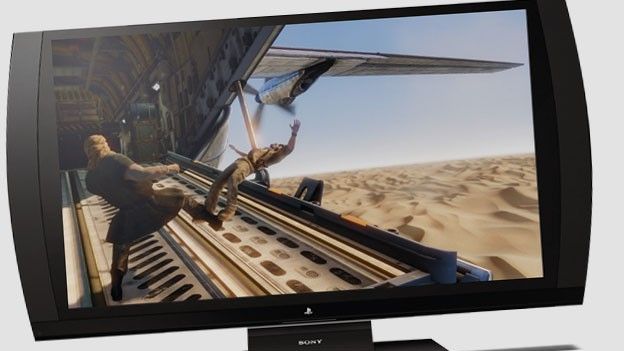 Not prepared to spend big on a 3DTV? The Sony PlayStation 3D display could be a cheaper solution to embracing the visual innovation. It's not the only reason you will want to spend your money though...

In a bid to get more PS3 owners to embrace the 3D gaming revolution, Sony unveiled its PlayStation branded 24-inch 3D-ready display at E3 last year. After initial delays, it's finally been made available to buy in the UK.

Aside from its stereoscopic prowess, we give you ten snapshot reasons why you should be parting with your cash to grab the Sony PlayStation 3D display.

4. Not just for gaming

You can connect it to a set-top box and choose whether to watch TV and movies in 3D or 2D.

With two HDMIs, a component port and compatability with the PS3, 3D-ready PCs and other 3D consoles, it's a multi-dimensional hub.

With a 240Hz refresh rate, the 3D telly should deliver smooth, lag-free PS3 gameplay and blur-free images when you are watching the telly.

Using active shutter technology, you'll get one pair of the 3D specs in the box, but if you want more you will have to pay $69 each (UK £TBC).

9. Gaming out of the box

If you are planning to pick one up from Amazon or other confirmed retailers, the display will ship with a copy of Killzone 3 and Gran Turismo 5 for instant 3D action.

Despite the pretty impressive specs on board, the PlayStation 3D monitor is one of the cheapest routes into 3D viewing to date.