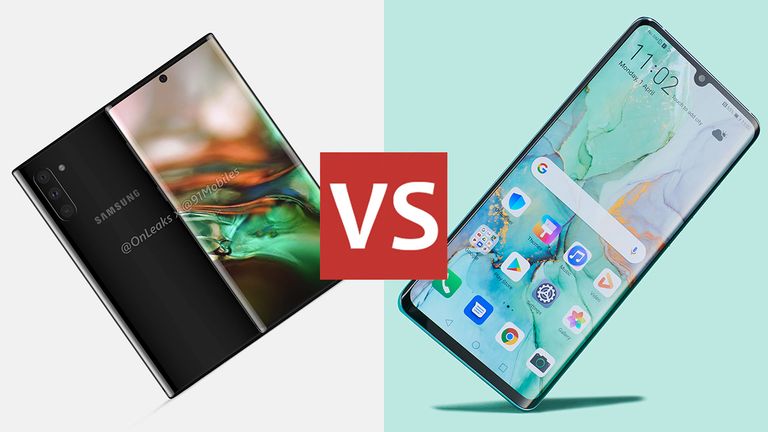 With the Samsung Galaxy Note 10 about to be unveiled upon the world, how is it going to stand up to the Huawei P30 Pro? Well, now that many of the Note 10's specs and features have leaked out, we can give you a fairly good idea about how the two phones compare.

And make no doubt about it – these are two of the very best handsets of 2019. Power, style, top-notch photos, huge screens... these phones have got it all. Whether you opt for the Samsung Galaxy Note 10 or the Huawei P30 Pro, you're not going to be disappointed.

If you want as much phone as possible and you're prepared to spend to get it, then the Note 10 Plus might be worth considering. It's also expected to have a slightly better camera system than the standard Note 10, another reason to spend the extra cash.

These phones both banish bezels right to the very edge of the screen, leaving a small cut out (or teardrop) notch at the top for the (single-lens) front-facing camera. Around the back there's no need for a fingerprint sensor – it's built into the display – but both phones have a triple-lens rear camera, with the three lenses arranged vertically.

In terms of the actual size of these phones, the Huawei P30 Pro comes rocking a 6.47-inch OLED display with a 1,080 x 2,340 pixel resolution. That's slightly bigger than what's been rumoured for the Samsung Galaxy Note 10, tipped to be appearing with a 6.3-inch AMOLED screen and a 1,440 x 3,040 pixel resolution.

We know the Huawei P30 Pro is available in a range of attractive shades – Aurora, Amber Sunrise, Breathing Crystal, Pearl White and... er... Black – but as yet we're not sure about the Note 10 (beyond the rather obvious black). Right now we reckon the Huawei phone might be the best-looking of the two, but we'll wait to see what Samsung comes up with.

If you put the most powerful phones of 2019 into a table based on performance then the Samsung Galaxy Note 10 and the Huawei P30 Pro are likely to be right up there at the very top. Inside the Huawei P30 Pro we've got the super-speedy Kirin 980 that Huawei makes itself, as well as 6GB or 8GB of RAM, and 128GB, 256GB or 512GB of internal memory (expandable via storage card).

We think the Samsung Galaxy Note 10 is going to come rocking the Snapdragon 855 Plus or Exynos 9825 processor (depending on where in the world you live), plus 8GB of RAM and 256GB of internal storage. There should be a memory card slot available as well, if previous Samsung phones (like the Note 9) are anything to go by.

As for cameras, we're expecting these phones to be very well matched, both in terms of the specs on paper and the end results. The Huawei P30 Pro comes with a quad-lens setup – a 40MP wide angle lens, an 8MP telephoto lens, a 20MP ultra wide lens and a time-of-flight (TOF) depth sensing camera. The Note 10, meanwhile, is said to feature a triple-lens 12MP + 16MP + 12MP rear camera.

Both these phones come with the latest version of Android on board, but we prefer Samsung's take on it rather than Huawei's. As for future updates, it looks as though Huawei and Google are going to be allowed to do business for the time being, so if you opt for the Huawei P30 Pro, you shouldn't have to worry about being caught high and dry with an outdated version of the OS.

Other features: the Huawei P30 Pro gives you the highest IP68 dust and water resistance, and comes with support for wireless charging too. You don't get a 3.5mm headphone jack. We're still waiting for the details of the Galaxy Note 10 to be confirmed, but it looks as though the phone will match the Huawei handset with those features.

One area where the Galaxy Note 10 will have the edge over the Huawei P30 Pro is in its stylus support, in the form of the bundled S Pen. The word is that the S Pen will offer more features than ever before this time around, including support for air gestures, allowing users to control the Note 10 without touching it.

With the caveat that the Note 10 has yet to be confirmed, it looks as though these two flagship Android smartphones are very evenly matched – and likely to be two of the best phones full stop for the next 12 months or so. They both pack plenty of power and are amongst the best-looking phones that money can buy too.

Why would you pick the Huawei P30 Pro? Well, it has a bigger screen, for a start, and a better camera – that extra TOF sensor should mean photos are sharper, especially in low light,  and it  can help with blur effects in portrait mode too.

Reasons to go with the Samsung Galaxy Note 10 instead include that S Pen stylus support, and the better job that Samsung makes of building on top of Android. Price is an important consideration too of course, so we'll have to wait and see how much the Note 10 is actually going to cost – and we'll update this article with the details as soon as we know.