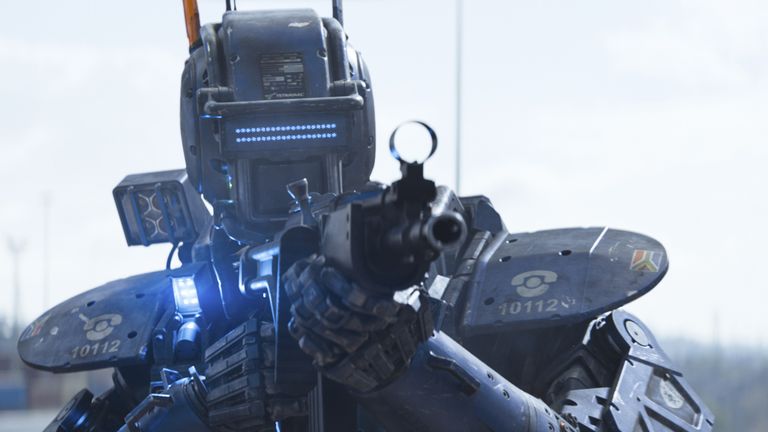 Chappie the movie is out now, from the Director of District 9. We've reviewed it in the latest issue of T3 Magazine. Here's a Q&A with Sharlto Copley, star of the movie.

Q: How would you describe your character, Chappie?

A: Chappie is a very unique little chap. He's a sentient machine that develops a consciousness and really comes into the world very much like a baby would and sees the world with wonder, curiosity and innocence. And he has two father figures in his life: his creator, played by Dev Patel (“Deon Wilson”), who wants him to paint works of art and write poetry and that sort of thing; and then he has a sort of evil stepfather, Ninja (Die Antwoord), who wants him to use his power and his skills for carjacking and armored car heists. He was a really fun character to play and it was a really great experience, personally, to be able to look at the world with that innocence one has when you're younger.

A: We used a process called performance capture, which allowed me to be in every scene with the actors and play Chappie the way I would normally. I wore a very tight, gray lycra-type suit with tracking markers. I also had a cool chest plate to make sure that my proportions were right. The biggest challenge was actually the clothing because, when I'm performing, I get a lot from the clothes and the costume and Chappie has to become a bit of a gangster in the film from time to time and I was concerned about how I would be able to do that with such tight fitting clothing. Working with the effects guys, I came up with a way of wearing a little pair of shorts over the top of my suit that I could lower in the way gangsters do – sort of riding them halfway down my backside – whenever I had to do those gangster moments. So, immediately, everything sort of comes from the groin area and relaxes you and all the movements and the walk…it made a huge difference, funny enough. Turns out low-riding pants were all I needed.

Q: What was it like doing your own stunts?

A: The animators did such an incredible job of capturing every single nuance [and] every finger movement I made that the movement became more specific than it would be doing a normal character. And, in tests, I would see them animate the stuntmen standing up off the ground and I could see that was very different from how I, as Chappie, would stand up. So, it kind of forced me to try and do as much of the stunts as I could because the movement was so very specific and personal to the character.

Q: How does this movie differ from others in the sci-fi action genre?

A: There are very few opportunities to bring real heart to the characters [because] there's usually a lot of focus on action and violence and darkness. So to play this character with this childlike light…was really refreshing. And there's a real intelligence to it. Typically, with a lot of these films with artificial intelligence, the question arises: is it going to be [about] man versus machine? In this case, Neill's exploration into this concept really creates something where you could think that artificial intelligence has more humanity, in a certain way, than humans do. An incredible intellect would, for example, easily be able to tell you that it doesn't make sense for humans to fight each other; yet we still do. It doesn't make sense for us to destroy the environment as much as we do; but we still do it. So it may be possible that an artificial life form would have more compassion, more empathy and more respect and gratitude for life itself than humans do.

Q. What was it like acting with Dev Patel?

A: Dev and I hit it off very, very quickly - both personally and on camera. We have a similar kind of heart and …wanting-to-emote style of acting. And, personally, we'd both had films we shot in the slums that came from nowhere and kind of changed our lives. So we shared a lot of stories about that. We kept expecting that Neill was going to put us in a garbage dump and we were both up for it and there were some horrible locations but nothing quite as bad as either of us had to face in the past. It was kind of luxurious for us, this one.