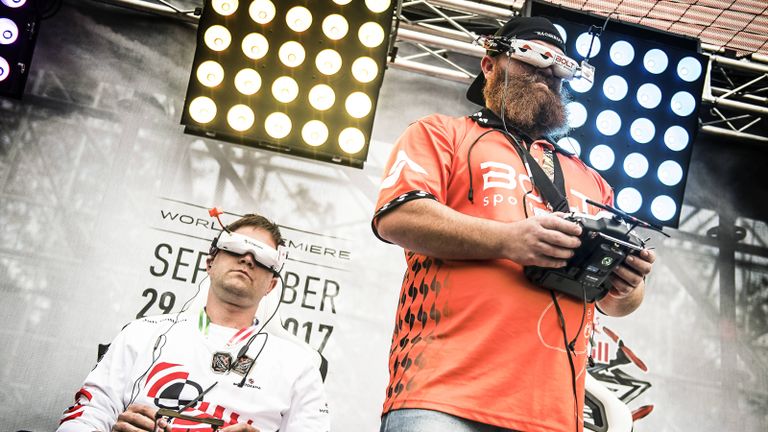 “Maximum agility, maximum speed and maximum performance.” These are the three things needed if you’re to stand any chance of staying on top at Red Bull’s DR.ONE competition according to Ross Kerker, one of the participants at this quirky event held in Spielberg, Austria at the weekend.

The challenges facing 18 entrants at the premiere of this event in Spielberg during a balmy end of summer two-dayer were certainly numerous. Flames, water jets and blasts of compressed air did their best to sabotage the competitive edge of folks from all over the world, including the Netherlands, France, the USA, Poland, Italy, Switzerland, Croatia, Australia, South Korea and the UK.

And, talking of Australia, watch Australian pilot Ross Kerker explain the tech behind his competition drone:

DR.ONE is a race unlike any other. The course and the numerous obstacles are designed to trial the resilience and stability of the pilot ́s quadcopters and includes a mandatory pit-stop for battery changes or repairs. The obstacles, or ‘Gates’ are inspired by the four elements; fire, water, air and earth.

“It ́s a drone race not only about the best technology or the most skilled pilot – also the best strategy during the race weekend is essential to take the win”, says Jörg Bumba, Race Director.

Although he’d been beset by some bad luck and a string of technical problems Australian Ross Kerker (aka RekRek – everyone has a competition alias including the UK’s own Tom Smith, who’s got the handle of Deathlad) was finding it more difficult coping with the chilly conditions on the second day.

The 32-year-old from the Gold Coast is more than used to competing, but DR.ONE is distinctly different. “It’s been a bit of an adventure to get here,” Ross says while enjoying the warmth of his puffer jacket. “There are a few things with the rules that are a little bit different to how we would normally race, but that makes it a little more challenging too. The course looks bad, but it actually flies pretty good. The lines flow well and there’s nothing too difficult.”

“My main obstacle right now is the water feature,” he adds. “It keeps putting water on my lens so I can’t see where I’m going. The Fire Gate isn’t too bad; the main issue with that is it leaves a residue on your lens, which takes about 10 seconds to evaporate.”

Ross points out that he didn’t really have any idea of how long they would have to fly for either. “We knew we would have to have a pit stop, so some endurance would be good,” notes the pilot. “So all out speed and a one minute flight time probably wasn’t going to be the best way. We went for an all-round easy to work on rig that we could adapt as the weekend went on.”

Nevertheless, despite careful preparation, fortunes for the affable Australian didn’t go quite as he’d hoped for. “You don’t get many chances, so things can deteriorate pretty quickly! I finished a race today, so it’s a lot better than yesterday!”

Staying up in the air requires a pit stop for a battery change mid-race, on any one of the seven laps that make up a heat. Meanwhile, under the stage where the pilots sit are independent spotters who’ve got the task of checking that each contestant makes it through all of the gates. Due to the speeds involved, this is a challenge in itself, but if a competitor messes up then they have to double back and try again.

In the run up to the event, Austrian pilot Walter Kirsch set a fastest ever drone record around the famous Red Bull Ring in a time of 1 minute 39.75 seconds. His race drone reached a top speed of 165km/h and an average speed of 155km/h, although it was still some way shy of the fastest lap around the circuit set by Lewis Hamilton in a Formula 1 car in a time of 1:07.411.

His racing drone, like the others used by the competitors at this event, is entirely scratch-build around a carbon-fibre chassis, which he designed and produced on a CNC machine. Every pilot has this carbon-fibre frame arrangement with LEDs that let the audience keep track of each twist and turn.

Performance-wise, four motors that all work independently via a controller let the pilot decide which direction to pitch, roll yaw and incline or decline. Meanwhile, on the bottom is a beefy battery that helps propel the drone from zero to 150km/h in less than a second. You can’t actually keep up using your own eyes, which is why there’s a camera mounted on the front of the frame.

This smaller FPV (First Person Video) camera is used to send the picture to a pair of video goggles via an antenna. This headset is vital for allowing competitors to navigate their way around the course via the live video feed. The additional GoPro Session on top of that provides the HD video content for race coverage and post-show distribution.

Competitors put their drones around the course and through the obstacles using personalised controllers, and everything is essentially manual. So, there’s no GPS or self-levelling gubbins to help pilots along. It’s all down to how you use the sticks on the controller. “It’s a steep learning curve, but it’s what we’ve trained for,” adds Ross with a grin. He’s not wrong…

The event ended up being won by Austrian Bastian Hackl, while Ross ended up in 15th place. British contenders Brett Collins and Tom Smith came 5th and 13th respectively. Find out more over at Red Bull.