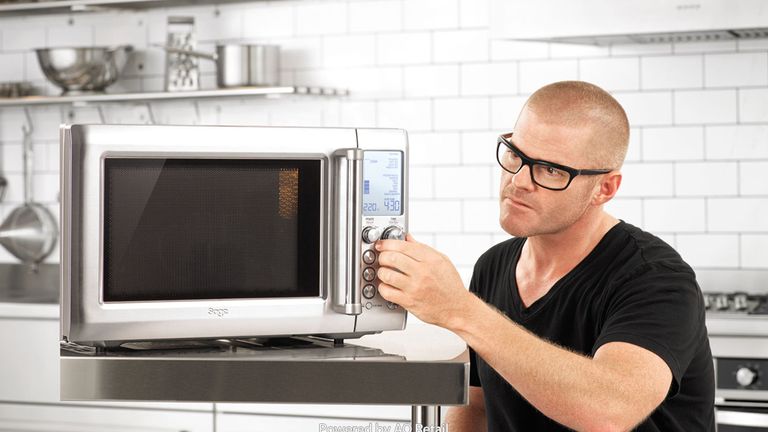 Kitchens stopped being places of drudgery and tedium around the time that dishwashers went mainstream and Heston Blumenthal invented the microwave. Today, they are veritable tech-filled fun palaces.

The big kitchen brands, alongside some newer challengers, have really pushed the envelope of culinary innovation. They've been racing to improve longstanding devices, and to invent new ones, to carry out cooking tasks we didn't even know we needed to be doing a few years back.

All this innovation means skilled cooks can make better food (and caffeine-based beverages) than ever before, while the rest of us can amuse ourselves with touchscreens, buttons and whirling vortexes of razor-sharp blend-o-matic food prep.

From the same stable as the similarly awesome Vorwerk vacuum cleaner range comes Thermomix, an intelligent food processor. The best of the currently on-the-rise new breed of all-in-one chopping, prepping and cooking devices, Thermomix really is like something straight out of the Jetsons.

Touchscreen-controlled, with access to a database of thousands of recipes, Thermomix tells you what ingredients to put in, then does everything from weighing to chopping to cooking them. Oh, and it will also handle steaming, stirring, milling, emulsifying (whatever that means), and a whole load more.

This kind of quality does not come cheap, and you'll need to pay an annual subscription for a 'Cook Key' to access the online recipe database (with "40,000 recipes from 15 countries – including 1,700 Australian recipes!"). But after an especially hard day at work, that is gonna seem like money very well spent.

2. Sage by Heston Blumenthal The Oracle Touch and Precision Brewer

The innovative genius of this bean-to-cup coffee-making behemoth isn't so much the touchscreen control or bracingly expensive price tag, nice though they are. No, the really clever bit is that The Oracle Touch looks just like something you'd find in your local artisanal coffee workshop, yet requires no skill whatsoever to operate.

It famously takes longer to train to be a barista than it does to be a barrister, and most bean-to-cup coffee machines get around this by creating coffee in a very different way – forcing milk through tubes at high pressure to texture it, and hiding the brewing process behind facades of plastic and chrome.

This, by contrast, just looks like a coffee machine, with a group head and portafilter (the bit with the handle that the ground coffee goes in) and a steam wand for milk heating, frothing and texturing. However rather than requiring you to know what you're doing, the Oracle handles all the complicated stuff that baristas spend years learning, with its computerised brain.

If you prefer filter coffee to espressos and cappuccinos, watch out for The Precision Brewer, which Sage is set to release soon in the UK (it's available overseas under various different brand names).

Again, this applies a quite ridiculous level of electronic and mechanical wizardry to making the perfect cup of filter coffee, with precision water temperature control, variable brew-time settings, and compatibility with V60 pour-over filters. Now that is well artisan.

Simple touch panel controls enable you to select precisely the right milk texture for your latte, cappuccino or Café Viennois, whatever that is. It'll also rustle up chocolate drinks and iced ones and, needless to say, there is an app.

The standard of milk texturing is well up to what a skilled practitioner of the coffee-making arts would make with a steam wand, or what you'd expect from a premium bean-to-cup machine costing thousands of pounds, so if you like milk-based beverages, the Nespresso Barista is well worth its £179 asking price.

All of Gaggenau's ridiculously opulent Vario 400 series cooling kit is great. They're all easy-open, handleless doors, which part to reveal a wonderland of warmly-lit stainless steel, dark anthracite anodised aluminium and glass. The ice and water dispensers built into the doors even sense your approach and light up.

However, even the fridges and freezers pale in comparison to the Vario wine climate cabinet 400. Taking inspiration from the oak barrels used to age wine, they feature wooden-fronted, dark anthracite aluminium bottle trays, which glide out on telescopic rails when it's wine o'clock.

Your electric cellar boasts three independently controlled climate zones, adjusted via touchscreen. As a result, you can have wines at a constant, cellar-style temperature in one part of the fridge, while white and red are maintained at the perfect drinking temperature in another. Five preset lighting scenarios are "perfect for showcasing prized collections that deserve to be admired."

Also rather brilliantly, the coolers are compliant with the Jewish sabbath – great news for religiously observant wine fanciers.

Hilariously, Gaggenau cooling products are so pricey that they won't even give us an RRP, so ask at your local dealer, having consulted your bank manager.

Sous vide is a style of cooking that involves vacuum packing food in plastic bags, then cooking it at a consistent, low temperature. This gives results that are more mouthwateringly tasty, and helps retain more nutrients than many cooking methods, but it does also tend to involve having something like AEG's SteamPro Multifunction Sous Vide Oven, which is both expensive and large.

Anova, however, is no bigger than a hand blender and can be plonked in any pot or pan you already own. Its heating element takes the water to the correct temperature – say, for instance you want a steak cooked to 65ºC, then that's how warm the water will be – and then it lets you know when the cooking process is complete via Wi-Fi and an app.

Be warned: this is by no means a speedy process, and you'll need to sear meat and fish prepped this way in a pan before serving, because otherwise it looks, as you would imagine, a bit weird.

It takes balls to innovate in the blender arena – after all, it's not as if standard ones exactly lack power. However, KitchenAid's Magnetic Drive range really steps things up a gear, tech-wise.

The blades, rather than being driven by a spindle attached to the body of the blender, are whirled around by magnets in the base, propelled by a 1300W motor. The 1.7-litre jug part of the device, meanwhile, is clamped firmly in place.

This means not only that it will blend the living daylights out of anything put in its path, you can also shake it about as vigorously as you like, because it's impossible for the top to pop off. Not that you'll generally need to shake it about as it's so powerful, but this can be useful with thicker mixes.

Various presets allow for easy preparation of soups, smoothies and (extremely) crushed ice. It does make a noise like a Harrier jump jet taking off, admittedly, so don't plan to have any conversations while using it.

Okay, maybe this is more one for the utility room, but this flagship laundry range is certainly quiet and attractive enough for the kitchen. AEG's big innovation with this line is the addition of a salt tray. As in your dishwasher, this softens the water used, so detergent can get to work more efficiently and everything comes out just so.

That's not the half of it, though, with a focus on gentle cleaning of delicates – silks, for instance, are whirled around in a cocoon of water, free from buffeting, and there's woolmark certification for its work with sheep-derived garments.

With the option of a rapid refresher steam wash for lightly soiled garments, the 9000 Series is as convenient as it is thorough.

Sometimes the simplest innovations are the best. People have struggled for years with making toasters that can cook the toast to exactly the right degree of brown-ness for each diner's individual tastes. Solution: make the toaster see-through, so a mere glance tells you when it's cooked to your liking.

This could so easily be the kind of thing that turns up on novelty gadget websites, next to BBQ aprons with amusing slogans on, but because it's Magimix, the Vision is also a well engineered, highly attractive thing.

You will need to clean it regularly, though, or all the artfully displayed crumbs will drive you mad.

Greatly decrease the number of trips you need to make to the big bin outside, with the Titan, a typically smart bit of gadgetry from Joseph Joseph.

Made from impressively fingerprint-resistant stainless steel, the Titan lets you crush your garbage mercilessly, by using the lid as a human-powered compactor.

Thanks to a well sealed lid and replaceable charcoal filter, although you can pack up to three times as much waste into the Titan's 30 litre unit, it won't smell three times as bad.