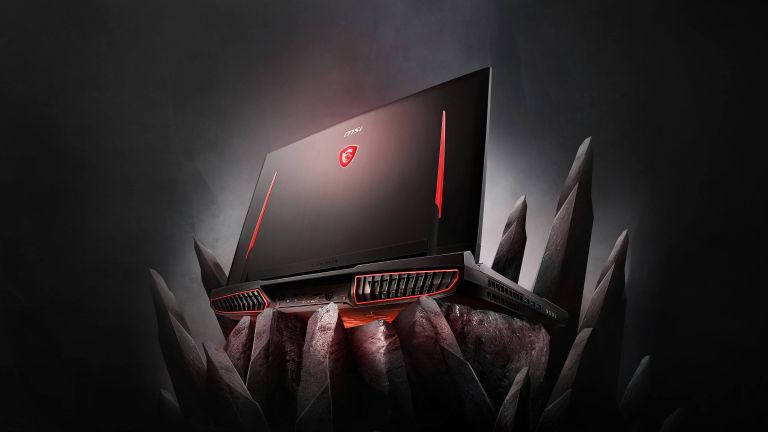 The MSI GT75 Titan is a truly bonkers gaming system. It isn't best described as a gaming laptop but a shiftable gaming power station that allows you to set up a monstrously powerful computer for both play and work where ever you go. Portable in the sense of whip out on the train for a quick blast it is not, and its insatiable thirst for juice means it can barely wander from a mains electricity supply, either. However, the GT75's incredible hardware spec, 17.3-inch 120Hz display, and smorgasbord of ports and connections make it a do-anything beast that well-heeled gamers are basically mandated to check out before pulling the trigger on an upgrade.

Welcome to T3's official MSI GT75 Titan review. Over the past week I have tested out this beastly gaming laptop and here I lay out my thoughts and feelings about its design and build quality, hardware and screen, as well as its gaming performance and features.

I've also got the latest availability and pricing information for the MSI GT75 Titan, too, so if you're looking to bag a bargain then be sure to check out the best deals on the powerhouse system below.

If you want a super-quick takeaway verdict right now, though, then you can consider the MSI GT75 Titan to be one of the very best gaming laptops on the market today. It isn't very portable, its battery is easily drained, and it is far from a sleek piece of aesthetic beauty, either. However it is monstrously powerful and delivers a super strong work and play gaming station that really does deliver across the board in the most zero-restraint way imaginable.

For the full, nuanced MSI GT75 review, then read on...

The MSI GT75 Titan is available right now at a variety of retailers including Amazon, Currys, AO. Box, Scan and ebuyer.

If you are currently looking to pick up the system then the best deal going right now comes via Amazon, which is delivering the system in with a Core i7, 16GB of RAM, a 512GB SSD, 1TB HDD, and an Nvidia GeForce GTX 1070 for a touch over two grand.

If you want a more powerful model, then AO are offering the system fitted with a Core i7, 32GB of RAM, a 256GB SSD, 1TB HDD and the wizzy new, ray tracing capable, Nvidia GeForce RTX 2080 for a grand more.

All the latest and best deals on the MSI GT75 Titan can be viewed below:

Take the MSI GT75 Titan out of its box and the first thing that hits you is just how chunky and beastly the system looks. It is literally two to three times as fat as some Max-Q gaming laptops on the market today, and when you pick it up and feel its  4.76kg weight, you know that this system is absolutely packing hardware-wise.

Visually, the lid of the system is dominated by the distinctive MSI dragon badge, as well as the company's logo. A pair of MSI-red fins flank these details either side.

Browse round the system and you are soon dropped into ports heaven. On the rear of the Titan you get full-fat Ethernet in, a mini DisplayPort, Thunderbolt 3 (USB-C), HDMI, and DC in (the system actually needs two full fat power supplies, but these are conjoined into one input by a desplitter).

Over on the right-hand side of the chassis you get an SD card reader along with two USB ports, while on the left you get a further three USB ports as well as a line in and out, as well as headphone and mic jacks, too.

Open the lid of the MSI GT75 Titan and there's only one thing that grabs the attention, the laptop's fully mechanical, SteelSeries-designed RGB gaming keyboard. That's right, the Titan comes equipped with a proper mechanical gaming keyboard, with its maker, SteelSeries, a regular entrant to T3's prestigious best gaming keyboards guide. This board feels great under the fingertips and is a genuine sit-up-and-pay-attention feature that separates it from the lion's share of rival systems.

Elsewhere under the lid, the Titan's modest trackpad and mechanically switched left and right selection buttons feel well positioned and work well, while a large smooth plastic wrist rest that wraps around the front of the laptop means extended period of typing can be achieved without any aches or pains.

Flip the Titan over and a base that is largely vented mesh becomes visible. Four extended, triangular-shaped rubber feet elevate this venting and, pleasingly for a system that has a mechanical keyboard equipped, there are additional centre-mounted supports to prevent any sponginess in the keyboard centre when typing.

Without doubt the stars of the GT75 Titan specs show is the Intel Core i9 CPU and Nvidia GeForce GTX 1080 GPU, the latter of which we will deal with later on in this review.

And, as you can see from the nearby boxout, the Core i9 definitely did not disappoint when it came round to posting benchmark scores. In our GeekBench 4 bechmarks the system managed to return an eye-watering single-core score of 5,818 and rival-smoking multi-core score of 22,521.

To get a good idea of how this compares, the recently reviewed Asus ROG Zephyrus S GX701 gaming laptop, which is equipped with a very powerful Intel Core i7-8750H CPU, posted scores of 4,752 and 19,412 in the same tests. While the Huawei MateBook X Pro premium ultraportable laptop, which is again well equipped with a  8th gen i7 8565U CPU, clocked in 5,258 and 16,917 respectively.

This goes to show that, without doubt, the Titan's 8th Gen Core i9 CPU really is a stuff-of-dreams component and, for a system that is named as it is, it really does deliver suitably titanic levels of processing performance.

Elsewhere hardware-wise, the GT75 Titan sent to T3 came loaded with 32GB of DDR4 RAM, close to 1.5TB of storage space, and a 17.3-inch, FHD, IPS, 120Hz screen that also supports G-Sync. The screen comes with a pleasing matte-finish, which reduces glare and reflections nicely, although it is completely surrounded by noticeably chunky bezels.

Now, I would be lying to suggest that the bezels in anyway affects the performance of the screen, which I found a perfect partner for the Titan's hardware spec. However it is another aspect of the system that aesthetically is not ideal, even if the top bezel does contain an in-built camera for video calls.

This was the bit of the reviewing process I was most looking forward to, as the idea of an Intel Core i9 and Nvidia GeForce GTX 1080 being pitted against our benchmarks and some demanding AAA games was a mouth watering proposition. And, as you would expect, for a portable system the results that the GT75 Titan delivered were incredibly impressive.

In 3DMark, for example, the Titan returned a DirectX 12 Time Spy score of 6,919, which is only a shade off the score lodged by the RTX 2080-equipped Asus ROG Zephyrus S GX701, while its Fire Strike Ultra score was in fact in advance of that system, with a very tasty 4,948 posted compared to just 4,666. Be sure to check out the full list of 3DMark benchmark scores in the nearby boxout.

And, as you would expect from a system that posted such scores in 3DMark, in-game performance was very impressive, too. I tested out a series of games on the GT75 Titan, including Hitman 2, Deus Ex: Mankind Divided, Metro Exodus and Dishonored 2, and with all settings cranked up to maximum at FHD resolutions those titles ran like a buttery smooth dream. Even the engine-clunk of Mankind Divided couldn't hold the Titan back.

As the Nvidia  GeForce GTX 1080 loaded in this system does not support ray tracing, which is the new graphical hotness taking the PC gaming world by storm, I also decided to throw the Titan at Metro Exodus' internal benchmark, which recently brought the Huawei MateBook X Pro, equipped with a GeForce MX250, to its knees in terms of frame rate.

With the new lighting tech off, I was intrigued to see how the game looked on a proper powerful gaming system, as to date I have been playing the game on a rig equipped with a ray tracing capable Nvidia GeForce RTX 2080 Ti.

As you can see from the nearby boxout, the GT75 Titan returned some incredibly good Metro Exodus benchmark scores, with the system posting average frame rates that at "High" settings were north of 60fps, at "Ultra" settings higher than 50fps, and at the GPU-smoking "Extreme" settings still over 30fps.

And, while I would be lying if I didn't say the world's environment looked flatter and less dynamically real with ray tracing off, the Titan running the game at Extreme settings made for a high-fidelity, super smooth gaming experience that was simply impossible not to get drawn in to and enjoy. The GT75 Titan doesn't understand the word compromise when it comes round to performance.

Now, of course, I would like to caveat this with the fact that this high-performance was delivered at a Full HD, 1920 x 1080 resolution, so if you are thinking of hooking the GT75 up to a 4K monitor then it may be worth paying a little more for an SLI variant or the aforementioned RTX edition, as it will allow you to maintain those high frame rates at even higher resolutions. If you are content at FHD and FHD+ resolutions, though, then I can confirm this GTX 1080 variant will be more than enough in terms of power.

There is something about MSI GT75 Titan that calls to the teenager in me. It is simply ludicrous, and in a stupidly good way.

Less is definitely not more here, with the GT75 abandoning any sense of minimalism and restraint in favour of more, more and even more. The hardware spec loaded into its chunky chassis is truly high-end gaming desktop, and if you plump for a variant with the Nvidia GeForce RTX 2080, then you'll get ray tracing goodness thrown in as well.

As you would expect from a system that shows little to no restraint, aesthetically the it suffers as a result, and it also stretches the idea of a gaming laptop to the very limit with its easily depleted battery and its necessary dual full-sized, kettle plug-equipped power supplies. Weight is definitely also not a strong point the GT75 Titan, either.

However, you cannot argue with the results the Titan produces, which regardless of whether you demand it output today's most graphically demanding games at super high settings, or ask it to shift into a high-powered editing station that can be used for basically any sort of general computing application, it absolutely knocks it out of the park.

Of course, a desktop system equipped in a similar way to the GT75 Titan can be constructed for less money, and that will also grant you the ability to upgrade all its components in the future, too. So, when push comes to shove, its hard to escape the fact that the GT75 Titan is a very select proposition. No doubt many gamers will be happy to sacrifice some power, ports, or power station usage for a far thinner and more portable gaming laptop.

For the well-heeled gamer who occasionally needs to take serious gaming and work station performance on the road (by car, hopefully!) to another, power-flush location, though, then the GT75 Titan is the best in business.