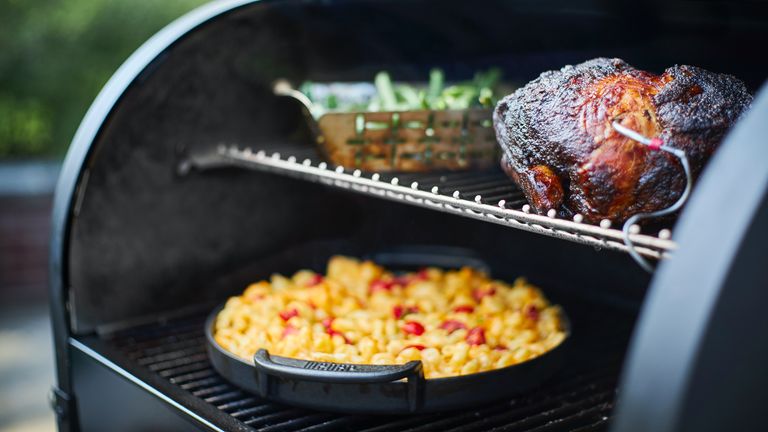 Weber SmokeFire could be a game changer for the barbecue world. We got to try it today and the grill, the software and – most important – the food it produced were seriously impressive. Sure, it was made by Weber's own team of grill masters, but the temperature probes and cooking app hold out the promise of making even complex smoked and seared barbecue easily achievable by anyone. We'll have a full hands on review soon but our first impression is: believe the hype. This can certainly smoke, like a boss, and it also seems to be able to sear well.

Weber's first pellet grill range, the SmokeFire system claims to be able to cook slow and low but also to sear at high temperatures. In other words, it's a smoker and a steak sizzler in one – no doubt well built – machine.

Weber is never one to rest on its laurels – nor be left behind by the likes of Traeger and Pit Boss – and its pellet-based smoker-cum-barbecue system will be ready for early 2020. Pellet grills are big business in the US where they love their smoked baby back ribs and slow-cooked cuts – and as you'll see from my Traeger Pro 575 review, pellet grills can be quite awesome cooking machines.

So far, we Brits have been far less imaginative and experimental when it comes to barbecuing. We seemingly prefer to indulge in the simple pleasures of slapping a bunch of cheap sausages and half a dozen chicken legs onto a searingly hot open grill – and then watching everything burn to a cinder. But smoker sales were well up this summer in Brittania and that trend could explode now UK market leader Weber is getting into the smokin' game. The SmokeFire system could also be huge in the USA though.

Why? Because this is a pellet grill that can sear more expensive cuts of meat fast, like a barbecue, but also cook slow and low, while also giving food a legitimate dose of smoke. It's potentially a one-way trip to flavour town, you might say. If you're Food Network's BBQ bro Guy Fieri, anyways.

By contrast, pellet grilling is a far more docile, manageable – and indeed easier – way to cook both meat and veg in the great outdoors. In fact, because pellet grills are controlled by an electronic processor, the heat under the lid is kept at a precise and constant temperature that barely fluctuates. This means you can set the system to cook at, say, 180ºC, and, like your oven, it’ll stay at that temperature for as long as there are enough pellets in the hopper.

If Weber’s past and current form is anything to go by, the SmokeFire should shift well here in the UK, not least because Weber already has a wide distribution system in place.

This is what the pellets look like: Twiglets, basically

• Weber SmokeFire will launch in March 2020.

What’s so special about the Weber SmokeFire?

Judging by word on the web, official press releases and a raft of video demonstrations, Weber has clearly looked closely at the competition and addressed common issues with many pellet-based smokers, namely the design of the auger – the mechanical corkscrew system that distributes wooden pellets down a tunnel into a small fire pot. Where most models use a relatively long, level auger tunnel, the Weber features a really short uphill tunnel. This supposedly helps to prevent blockages and, perhaps more importantly, blowbacks – that admittedly rare instance when the pellets in the auger ignite, leading to possible conflagration of the entire pellet hopper.

Most current pellet grills are ideal for slow roasting and, of course, smoking. What they are not normally that good at is searing steaks which require temperatures around 500ºF or 260ºC. According to Weber, the SmokeFire is capable of reaching a temperature of 600ºF or 315ºC – that’s another major plus in its favour.

Like the Traeger Pro 575, which rates highly in our Best Barbecue guide, the SmokeFire is fitted with a digital control panel that lets you choose your temp and time frame and retreat in the knowledge that everything will be cooked to succulent perfection with very little intervention. The integrated Weber Control app, meanwhile, offers ‘step-by-step guidance on everything from setup and meal-prep, to smart tips and custom food doneness alerts’.

We’ll tell you much more about this new pellet grill when we get our mitts on one the new year. In the meantime, bask in the knowledge that next year is going to be the year you finally shake off the shackles of being a banal barbecuer and become a true grilling supremo. Build it and they will come.