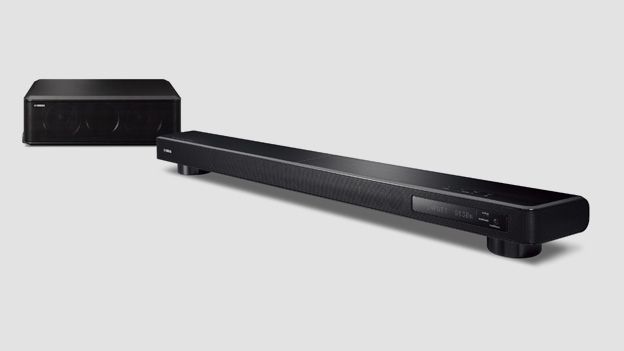 Can the Yamaha YSP-2200 Digital Sound Projector help the brand to keep its grip on the top spot in the soundbar market? Find out here

Add-ons include a YSD-12 iPhone dock (£60) and a YBA-10 Bluetooth receiver (£90) for streaming, but as it comes it's an impressive effort that boosts a TV's sound in numerous different ways. The YSP-2200 goes up against the likes of the Orbitsound T12v3, Monitor Audio R one HD and Bose Cinemate 1SR.

Armed with three HDMI inputs and a sole output alongside two slots for digital optical audio and a coaxial jack, stereo analogue audio ins and a composite video out, the YSP-2200 is easily the best connected soundbar around. Just to underscore the YSP-2200's cutting-edge reputation, those HDMI inputs meet the latest 1.4 spec so can pass-through 3D signals.

The headline act is the YSP-2200's 16 separate speaker drivers, which each uses its own digital amplifier to bounce soundwaves off the walls to come at you from behind. Enveloping surround sound should be the result, though this is also one of the few soundbars that offer multiple audio modes that can be toggled through on the unit's tiny green-on-black LCD screen.

This IntelliBeam system is easy to set-up, but we did come unstuck when we tried it initially; Code Error 4 isn't the kind of message we ever appreciate, though after consulting the manual (a PDF of which had to be downloaded) it transpired we'd placed the microphone just out of line-of-sight with the YSP-2200.

After correcting the placement, short bursts of noise, tones and other horrid sounds followed; we left the YSP-2200 to it, and returned to find the five-beam mode and subwoofer fully calibrated.

Another great feature is sleep; one touch of a button can make sure the YSP-2200 switches off in increments up to 120 minutes. For 'yet another' component that eats more energy, that's useful.

Measuring 944 x 79 x 145 mm, the YSP-2200 is remarkably low profile for such a serious piece of kit. It's high quality in terms of build, too, with a solid metal grille folding around the front. At 435 x 137 x 350 mm, the NS-SWP600 subwoofer is the usual size for a soundbar's companion, though it does differ in its design.

Able to be laid flat as well as in an upright position, it connects to the mother ship via standard speaker cable.

Those 16 individual beam drivers' amplifiers each issue 2W of power that, added to a 100W subwoofer, equal a 132W system. The remote, unfortunately as meaty as any TV remote, isn't exactly stuffed with controls, but does sport eight dedicated buttons that cover a total of 11 DSP (Digital Sound Projector) modes. Gulp.

There are also a variety of less defined (slightly) modes including 5BeamPlus2, 3BeamPLUS2+Stereo, 5 Beam, Stereo+3Beam, 3Beam, Stereo and My Surround. Comprehensive, yes, but isn't this all a bit much for the casual user?

In a word, yes. If you deactivate those DSP modes altogether, the sound is a little flat, so it's worth finding the specific modes that suit, but that does mean trawling through some rather odd ones. For instance, the Music mode's Concert Hall setting should be called 'toilet mode', and the Jazz Club setting isn't much better.

The trouble is, these are largely novelty modes, and elsewhere it's not perfect; the separate subwoofer is a little unsteady and – perversely for a muso brand – straightforward stereo seems a little limp.

Otherwise it's a powerful performance. Rear surround sound effects do occur, but they're rare, though there's a terrific widening of the soundstage. It also becomes almost impossible to discern where the sound is coming from, unless it's dialogue, which is firmly in kept in the centre.

Yamaha keeps its grip on top spot by once again treating the soundbar (or Digital Sound Projector, as it calls it) genre as a high-end choice rather than as a mere space-saving accessory. It measures just 79mm in height, but it's the 16 separate speaker drivers' enveloping surround sound (it bounces soundwaves off the walls to come at you from behind) and HD codec support we love most.

Controlled using a remote and LCD screen, it's able to handle 3D signals via its three HDMI inputs, though it's not perfect. There are too many sound modes, the separate wired, yet passive subwoofer is a little unsteady and stereo seems a little limp, but otherwise it's a powerful performance.