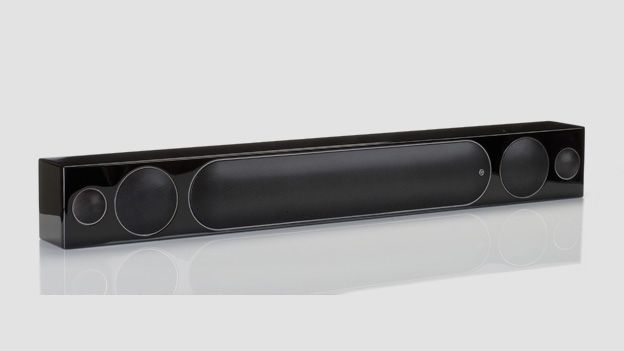 The Monitor Audio Radius One HD is a space-saving device that will boost your TV's sound capability, while the reducing the amount of unsightly cables

The Monitor Audio Radius R one HD shows that appearances can be deceptive; most soundbars attach to the mains, switch various audio – and sometimes video – inputs before creating quasi-surround sound modes good enough to convince us to ditch the home cinema system.

The R one HD, however, is aimed squarely, and solely, at those already owning a home cinema system that don't want to replace it, but simply want to reduce the speaker and cable clutter. In short, the Radius HD One is a speaker-bar rather than a soundbar.

It doesn't have an AV amplifier built-in, so should be confused with all-in-one soundbars such as the yamaha YSP-2200, Orbitsound T12v3 and Bose Cinemate 1SR, though anyone already owning a home cinema can slimdown nicely with the Monitor Audio Radius R one HD.

The Radius R one HD, you see, is a passive speaker. On its rear are wired analogue speaker connections inputs for left, right and centre channels; it therefore requires a multichannel AV receiver to feed a signal into each, so whether it can cope with codecs like DTS and Dolby entirely depends on the that component.

You therefore don't get niceties like a LCD screen, HDMI switching or Apple iPhone features; the R one HD lives or dies by its sound quality alone.

Designed simply for those simply wanting to reduce the number of speakers in either a 5.1 or 2.1 set-up, the R one HD is not your average soundbar.

At 125mm tall, 105mm deep and 985mm in length, it's a hefty speaker-bar; the size of its cabinet is necessary to reproduce home cinema-quality sound, though we do have concerns about its gloss black lacquer styling (gloss silver or white finishes are also available). It's reasonably attractive, but easily gathers fingerprints and, worse, slight scratches.

Surround sound can only be gotten from adding rear speakers (such as the matching R45HD rear bookshelf speakers, £190 per pair), and our sample also came with an active, wired Radius 370HD subwoofer. Fitted with three-inch Gold C-CAM dome tweeters and four Metal Matrix Polymer driver cones, the R one HD can be wall-mounted using fixings in the box.

Despite it doing the work of three home cinema speakers, this speaker-excels. It won't impress as much in over-large home cinema, of course, but in our medium-sized test room (about 15x15ft) we were able to discern impressive separation in a multichannel mix.

You will need a subwoofer – despite a punchy performance that's wider than most, the R one HD doesn't offer much in the way of committed bass – but the accuracy of treble detailing and a wide mid-range allows a lot of detail through. A blast of Pretty Persuasion by R.E.M., complete with echoes on vocals, is also encouraging, though it's at its best with movie dialogue and all-action soundtracks.

Limited in its scope it may be, but this beautifully built speaker is worth considering if you've a home cinema that's busy on cables. We can see it being especially suited to either small, or occasional home cinema systems where a projection screen is often rolled-up or hidden, since the R one HD – despite its size – would then constitute the only speaker. An awesomely high build quality and peerless audio, but this pricey package won't suit all.