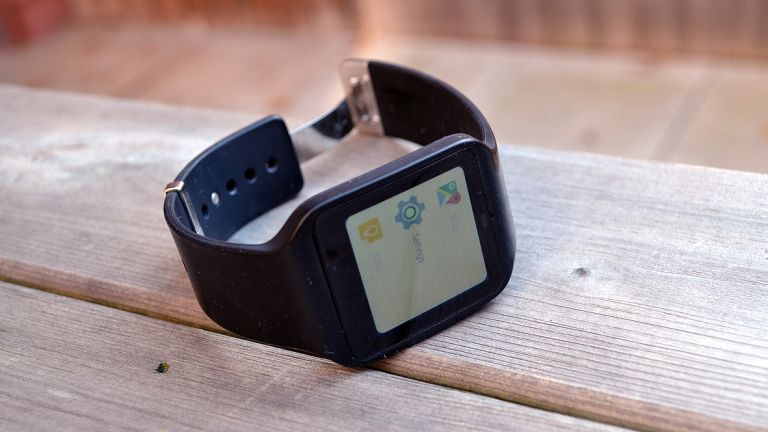 In an attempt to stand out from a growing crowd, the Sony Smartwatch 3 packs in as many features as possible: GPS – unique among smartwatches – WiFi, NFC, and waterproofing, for just a lick over £100. But do Sony cut corners elsewhere?

After going hands-on with the watch earlier in the year, we've had a chance to live with it for a while, This is our verdict...

The Smartwatch 3's 1.6-inch 320 x 320 display is sharp, but its colours look faded. Poor viewing angles exacerbate the problems – a slight tilt will wash out the colours completely. On the plus side, it's transflective, which means it reads well in direct sunlight, and its default automatic brightness mode adjusts well.

The battery is impressive: we got just under two days with normal usage, and it charges lightning quick, from 0 to 100 percent in around 30 minutes. Regular GPS or WiFi use will squeeze the juice fast, but still leave you with battery after a busy day.

Sony's offering can't touch the Moto 360 or LG Watch Urbane for style: while it looks fine at the gym, it jars with a smart outfit. The face is a chunky rectangle, and the strap is rubber, the kind you find in a sports watch: completely functional, but far from sleek.

However, all is not lost: the Steel version shown above is also available, which looks far better. It costs more and doesn't fix the shape, but it's still the version we'd recommend.

Smartwatch 3 makes the business of dealing with notifications – still the core function of a smartwatch – painless.Whatsapps, texts, and emails arrive instantly over Bluetooth, WiFi capability also means you can sync with a phone over the same network withoutBlueooth, meaning you can get alerts without being near your phone.

You swipe right to dismiss notifications or left to pick a response – replying with your voice, picking from a list of pre-programmed phrases, or drawingemoticons. It's buttery smooth, and if you take it off you'll miss being able to see at a glance whether that vibration is a spam email or an important text from your boss.

The Smartwatch 3 opts against a heart-rate monitor – probably a good decision given the questionable accuracy of the ones we've seen in the LG G Watch, Apple Watch et al – and instead plumps for built-in GPS along with IP68-certified water and dust proofing.

This not only means you can take it to the pool, but standalone location means you can leave your phone behind when you go for a jog, taking your Bluetooth headphones instead and listening to music stored on 4GB internal storage. Using an app like Google's own MyTracks, you can map your runs without the need for a second screen in your pocket: something no other smartwatch offers.

Sony's own app is this: Lifelog. This breaks your day down into all manner of activities that it detects, or thinks it detects, you doing. The results are of questionable usefulness but hey, pretty visually impressive, right?

The GPS is not as pinpoint as in a dedicated running watch, but it's good enough to accurately track a half-hour jog around the park. It also tracks steps via Google Fit and displays your activity throughout the week – a neat touch, although on our tests it underestimated by as much as 25%.

You can use your voice to access most of the watch's features – take a note for later, track your steps, or even run a basic Google search and see the first page of results, including a handy Wikipedia summary. But it's often quicker to pull out your phone, so we ended up doing that instead most of the time.

However, we did enjoy replying to messages. Get awhatsappor email and you can write out a response by talking into the watch's front-facing microphone. It's accurate, even if busy environments, and sensitive enough that you won't have to broadcast your thoughts to everyone in the vicinity.

The list of AndroidWear compatibleapps is still small, and most apps are of little use on your wrist. Using the default agenda app, you'll be able to see your plans for the day, but nothing more, for example.

But in some cases apps work really well: opening up the Tripadvisor app gives you a handy list of nearby restaurants, while the Find My Phone app lets you call your device from your wrist when you lose it. Google Keep worked particularly well – the square screen lends itself well to the apps cards, and you can add notes with voice commands.

Whilst there's little to differentiate devices, the Smartwatch 3 impresses with buttery smooth performance: I never got any slowdown while flicking through apps or stacks of notification cards, thanks to the beefy 1.2GHz quad-core processor and 512MB of RAM. Plus, its GPS gives it the edge on location-ready apps, such as Google Maps.

This is not a sexy item like the Apple Watch, but it is exceptional value, especially if you're a runner who prefers to hit the streets without a phone. Android Wear is an effective wearable OS and this showcases it very well.

For the price you pay, and the number of features you get, it's possible to forgive the aesthetics andsub-parscreen. Would we wear it to a dinner party, or even the office? No. But we'd wear it to go running, and if you can live with the looks, you may learn to love it. More realistically, we'd say you're better off with the steel version, which is a nicer looking (though admittedly still not quite what you'd call stunning) incarnation ofthe exact same smartwatch.