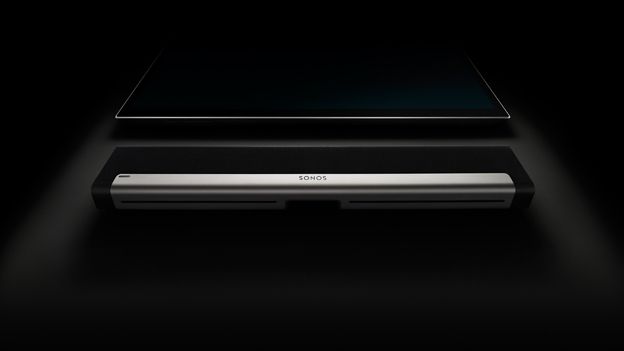 In a bid to widen the brand's audio appeal to television watchers, the Sonos PLAYBAR marks a brave diversification for the world's music-streaming darlings

Sonos' last product launch - the Sonos Sub raised the eyebrows of many; a huge wireless subwoofer to accompany its streaming Play speakers and Connect amps. Where was the portable battery-powered unit? What about the waterproof stick-on speaker for the bathroom?

Nether showed, however, with the PLAYBAR now making up part of its product range, the thinking is clear: Sonos wants you to ditch all existing hi-fi kit for its sleek AV modular system.

But soundbars aren't anything new. The likes of Yamaha, Panasonic and Monitor Audio have been adorning shop shelves for a decade, so what's special about the PLAYBAR and why should you invest in this £600 speaker?

Like all other Sonos products, the PLAYBAR's ridiculously simple set-up is its trademark quality. Fire up the Sonos phone/tablet app and illustrated instructions pop up on-screen, walking you through the two-minute process.

The idea is that all sources (console, PVR, etc) plug directly into your TV and a single optical cable (supplied) runs from your TV into the back of the PLAYBAR, thus bypassing the need for a separate AV receiver.

Of course, the amount of kit that can be connected is restricted by how many HDMI inputs your TV has, but most now boast at least two. Our 47-inch LG 47LW550T has four, so a PS3, Sky+ HD, Apple TV and a Cambridge Audio Azur 751BD Blu-ray player were attached. That's one more source than our slim AV receiver was capable of, making it all but redundant from the TV stand.

The setup app then listens for a sound signal and cleverly guides you through reprogramming your TV remote so that it controls the PLAYBAR volume, rather than the TV. The only manual task is to delve into the TV's menu system to disable the built-in speakers. Once sorted, it works a treat. And that's it.

If you have a brace of PLAY:3 speakers, you can wirelessly group them to the PLAYBAR to be used as left and right rear surrounds, which again is ridiculously easy to set up, but bought separately would cost a further £520.

The PLAYBAR is just under a metre wide (90cm), and 14cm high and 8.5cm deep. Depending on the size of your TV stand and table, it can fit directly in front or, alternatively, be wall-mounted above or below the TV. Sonos' Wall Mount Kit is sold separately for £35.

The PLAYBAR weighs 5.4Kg, is solidly built and luxuriously designed, complimenting the black and aluminium lines of most modern TVs.

Whether you think it looks nicer than a pair of stereo speakers and a centre channel running from a dedicated amplifier/AV receiver is a matter of opinion, but it transforms standard TV sound (see below) from tinny to downright chunky.

The PLAYBAR supports Dolby Digital 5.1 and stereo, but not DTS. You can't attach your own surround speakers, either. From the Sonos app, you can choose to play music through the PLAYBAR (just like other Sonos kit) or from the TV source. It will default to the TV whenever it detects a signal.

A small, but welcome, consequence of this is that you can watch one thing on the TV and listen to another; music from your digital music collection for example. Or you can play FIFA 13 while listening to your Spotify playlists, which remains one of the greatest examples of cross-brand audio tie-ins going.

A couple of nifty features reserved solely for the PLAYBAR are Night Sound and Speech Enhancement. Activate the former and it will enhance quiet sounds while suppressing loud ones, which is great for late-night movie watching or gaming while the family sleep.

Speech Enhancement boosts the centre channel to make dialogue clearer. The two can be used in conjunction and work well, though both features can be found in competing soundbars.

Sensors inside the PLAYBAR automatically tweak channel orientation and the equaliser, depending on whether it rests on a table or is wall-mounted above or below the television.

If the PLAYBAR isn't hard-wired to your router you'll need to connect a Sonos Player or Bridge via Ethernet for the PLAYBAR to be recognised. Along with power and optical input sockets, there's an Ethernet port. However, we found Sonos' bespoke mesh wireless network to be robust, without any loss of stream, even when dealing with megabyte-hungry FLAC files.

Entering the AV world, the PLAYBAR now has a fresh collection of combatants to outdo. Multi-channel audio is still big business and Sonos is keen to highlight that its nine-speaker soundbar (six mid-woofers and three tweeters) can compete with the big guns.

As a solo sound source, the PLAYBAR impresses whether watching a movie, TV show or playing a game. Bass is surprisingly deep for a standalone unit and that nine-speaker array makes the centre and stereo channels rich and clear. Crank it up and it's loud, too.

Music-wise, the quality is completely dependent on the source file. Streamed FLAC and 320Kbps MP3s sounded composed, but we could unquestionably hear the all-too-familiar crunch of lower-grade radio streams, podcasts and audio files.

In terms of quality, we'd put it on par with a £500 hi-fi package consisting of stereo speakers, an amplifier and interconnects. It doesn't have the refinement of more expensive hi-fi systems, but then you're paying less than £600 for a '3.0' setup.

However, add the Sonos SUB to create a '3.1' system and things change. Having that dedicated bass channel allows the PLAYBAR unit to concentrate on higher frequencies, thus creating a more balanced sound. Like us, you'll have to play around with the SUB settings, as having it too loud can be overkill.

Find the sweet spot for your sized room, however, and it's impressive. However, let's not forget that the SUB costs £599, taking the overall cost to £1198.

While the PLAYBAR has a couple of side-firing speakers for a pseudo-surround effect, we didn't find it as encapsulating as other dedicated soundbars, such as the Yamaha YSP-4300.

The addition of two PLAY:3 speakers to create Sonos' first ever 5.1 package is welcome and sounds great when Dolby Digital kicks in, but these cost another £260 each taking the overall surround-sound price package to £1718. Admittedly, no other system works like Sonos in terms of streaming flexibility, but you can pick up a decent-sounding 5.1 package for similar bunce.

Naturally, the PLAYBAR can be joined to other Sonos 'zones' for simultaneous playback. We had it linked to a couple of PLAY:5's in a relatively large room and, although we noticed a very slight delay, the effect impressed us and our guests. It's great for filling a room of music or, if the big match is on, the sound from a TV source.

As a standalone unit, the PLAYBAR is a great bit of kit – injecting life into your TV (and source) audio, while delivering immersive musical streaming sonics. With its built-in Class-D amp and clever optical integration, it does away with the need for a dedicated AV receiver and individual speakers, making things looks neater above, below or in front of your tellybox, which could appeal to those with the 'purchase power'.

Sonos won't be offering a special deal on a full 5.1 pack, but T3 has been told that retail partners might start doing combinations of the PLAYBAR and Sub. Watch this space.

Compared to what we've heard elsewhere, we were hoping for a better pseudo surround effect from the PLAYBAR. However, we're in no doubt that the simplicity and integration with services such as Spotify, Napster, Rdio - plus your own collection through iTunes, HDDs and AirPlay direct from iOS devices - will attract a new line of people; where Sonos was once all about music, it's now about TV, too.

And this all-in-one message is likely to appeal. The fact that it can handle all of your digital music, movie, gaming and TV sound is a key selling point and goes some way to justifying the £599 price tag.