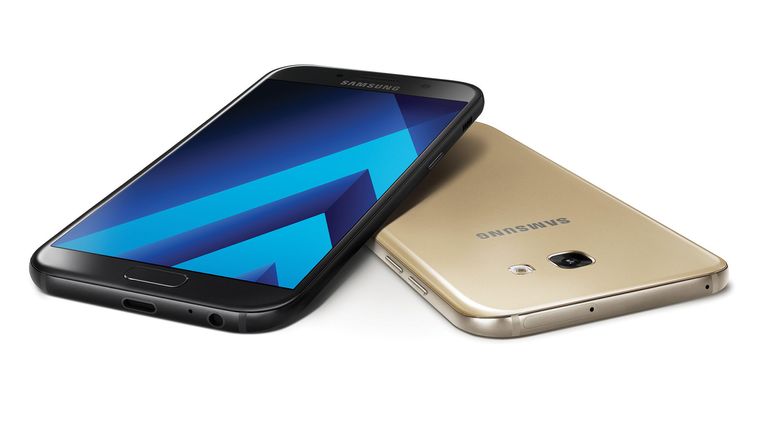 Don’t pay full price: this Galaxy is good and well specified, but it’s a mid-range device with a premium price.

The new Samsung Galaxy A5 is an odd proposition. It looks like a flagship phone, but it isn’t as expensive; it’s pricier than a mid-ranger, but has a very mid-range specification. It’s become more attractive since post-launch price cuts but it faces tough opposition in the form of the OnePlus 3T and Moto G5 Plus.

The design hasn’t changed much since the 2016 model: it has glass on the front and back, and the sides are colour-matched aluminium. The Gorilla Glass is fourth generation, not fifth, so don’t drop it from shoulder height.

It looks good in black, gold, pink and light blue and looks and feels rather like an iPhone 7 or Galaxy S7: premium, and not porky like some phones with 5.5-inch displays can be. This one’s 5.2 inches.

Just watch the soft keys if you’re coming from another Samsung: they’re the other way around from what you’re used to, a move that makes sense for the right-handed majority but a niggle if you’re used to the old ways.

The speaker’s in an odd place, at the top right instead of in the front or bottom. That means it’s quite easy to block by accident, but it’s also quite good for gaming as you don’t block the speaker when you’re holding the phone vertically.

As with high-end Samsungs, the A5 is water and dust resistant to IP68. That means you can’t take it swimming but it’s okay for the beach or bath.

As with other Samsungs you can choose different colour photos that make a very big difference to the display. Adaptive Display is like TV’s Retail Mode and therefore a little OTT, but cinema and photo modes are a lot calmer. And we’re always happy to see an Always-On display so you don’t need to wake the entire screen to see key information.

The 5.2-inch display is a 1080p Super AMOLED with typically vivid colours and excellent contrast. It’s a little bit fuzzy compared to the Galaxy S7, but there’s not a lot in it. It’s superb for gaming and movies, helped considerably by a three-core Mali-T830 GPU. The sound isn’t so good, though: it’s neither particularly great or particularly awful, particularly loud or particularly quiet.

The camera specs don’t tell the full story. That 16MP on paper delivers poorer photos than many current 12MP models, and some of the best 13MP ones make it look pretty shoddy. That’s a shame because the camera is very fast and free from the lag that plagues some other phones. The lack of stablisation is a real negative, though.

You’re not paying a premium for performance here: while the octa-core Exynos 7880 chipset is newer than rivals’ processors, the Galaxy A5 delivers reasonably similar performance to the older, and cheaper, Moto G4 Plus. That’s because the cores of the 7880 are all Cortex-A53s of the kind you find in budget devices. It’s fast for a Cortex-A53 phone, but that doesn’t mean it’s fast compared to others in the same sector.

The A5 ships with Android 6.0.1 with Samsung’s own interface on top. It hasn’t changed significantly since 2016: it’s a little slow compared to stock Android, and it’s noticeably slower in everyday interactions such as using the fingerprint scanner.

The battery is 3,000mAh and good for a day of typical use: we found that even a fairly busy day left around 40% of the battery by bedtime. It’s a fast charge battery, reaching full charge in just over an hour.

The OnePlus 3T looms over the Galaxy A5 here: it’s a similar price but performs so much better, and its camera is better too. There’s a strong element of brand loyalty here: people will buy the A5 because they want a Samsung, not necessarily because they want the best phone in this sector – so they might not consider the OnePlus, the HTC U Play or the Honor 8. It’s not a bad phone, but it could have been brilliant.