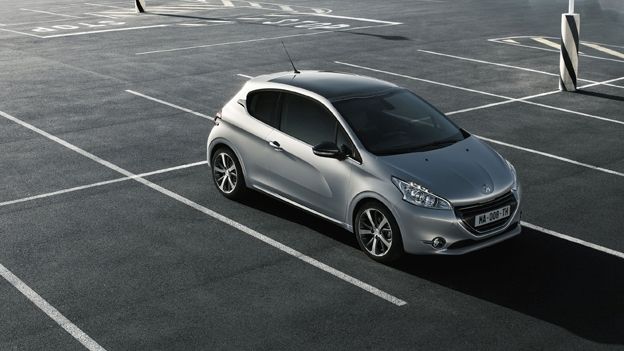 Hot hatch car reviews are always difficult, in the case of the Peugeot 208 Feline THP 156 it becomes almost a nightmare.

On the one hand we have our inner-kid fighting to relive the days of belting it around country roads in a battered blue 206 but then on the other hand this is a car that costs nearly £17,000 and needs to survive everyday living.

Lets start with the inner-kid first in that case. The THP 156 is essentially a taster of what's to come with the 208 GTI which was showcased at the Paris Motor Show last year.

Until the 208 GTI becomes official however, you'll have to make do with a beefy 1.6 litre engine which produces around 154bhp. This will see you hit 62mph in a little over 8 seconds which is sadly nowhere near that of Vauxhall's Corsa VXR but then again this isn't a full blown hot-hatch.

In terms of actually driving the THP we have to admit that it just didn't feel as responsive around the corners as we expected. Combine that with some fairly rock solid suspension and you have a car that doesn't really lend itself to the pot hole-ridden fairground that is the British countryside.

Take it to the city however and things look up, yes it looks like a big car but actually the 208 is smaller than the 207. Thanks to some nifty work with the steering, it becomes a breeze to navigate the armies of cyclists, prams and markets that now inhabit the trendy southern hubs of London.

You'll also have noticed that the 208 THP is actually a very good-looking car, some subtle styling changes make you aware of its sporty intentions whilst the chrome accents give it a style that can really only be found on the Fiat 500 or the Citroen DS3.

First seen in the concept models that Peugeot showed off last year, the 208 is the first real car to feature the company's new 7-inch touchscreen multimedia system. With a tron-esque design throughout it's a pleasure to look at and compliments the equally slick interior that Peugeot have opted for.

That said, it's certainly not lacking in features, with full support for iPhone and Android smarpthones via a connector or Bluetooth you'll have no problem belting out your favourite tunes. The Sat Nav is more than adequate and while fiddly to use is clear and precise with that large 7-inch touchscreen really coming into its own.

The dashboard itself is a triumph in design, so often do you see concept cars that then lose their best features when entering production, not so with the 208. With blue lights accenting the dials and a full-colour screen in the middle it looks like an interior that has been built to match today's tech-focused world.

The theme continues with blue lights edging the panoramic roof which not only adds class but at night baths the interior of the car in a gentle glow. Utterly pointless but unlock the car at night and it never fails to bring a smile to your face.

The main problem with the THP 156 is that it is in many ways the 'inbetweener' of cars; created as an interim before the GTI is released in April it is a combination of sporty yet luxurious.

Sadly it 's more luxurious than sporty leaving you with a car that has the hard suspension of a sporty hot hatch but the soft handling of a city-focused runabout.

The best way to approach the THP 156 then is to think of it as Peugeot's premium city car rather than the 208 GTI's smaller brother, of course that comes with the downside which is that you'll then still need to wait for the 208 GTI which comes out next month.