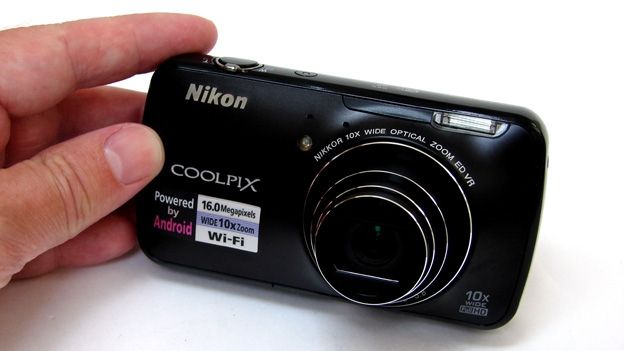 As the first digital camera of its kind to go on sale, is the Android 2.3 Gingerbread-powered Nikon S800c a novelty or the future?

Our smartphones have incorporated digital cameras for a decade, so isn't it time that compacts took a few lessons from the smartphones threatening to kill them off? Nikon thinks so, and has launched the first Android powered camera to hit the market in the £380 Nikon Coolpix S800c, rival in that respect to the subsequently announced Samsung Galaxy Camera.

Resembling a regular – if slightly elongated – pocket snapshot from the front and available in black or white livery, it's a different story at the back of the S800c.

This features a 3.5-inch touch screen display with operational icons and 'apps' familiar to Android phone users. The idea is that the Nikon provides an easy step point up for those used to snapping with their phone rather than a dedicated camera.

And although this Coolpix isn't intended for making calls, it does offer GPS, Bluetooth and Wi-Fi connectivity with the ability to download the latest apps direct, whether for enhancing photos or simply playing games.

This provides the equivalent focal range of 25-250mm on a film camera. Pictures and Full HD 1920x1080 pixels video are still committed to removable SD media cards, though there's a generous 1.7GB of built-in memory allocated for images, plus a further 680MB for applications.

So, taking the above into account, how does the Nikon Coolpix S800c shape up as a first-of-its-kind device? Is it more than just a smartphone with the phone aspect removed?

At the front and from the top the S800c's control layout mirrors most other pocket snapshots, with shutter release button ergonomically encircled by a zoom lever and on/off button alongside. But it's a different story at the back. Here three Android phone-like physical buttons are ranged to the right of the screen if holding the camera in landscape fashion.

The looped arrow insignia indicates a back or 'return' button to extract ourselves from menu options and revert to business at hand, while a central 'home' button takes us back to the main screen. The third option is the self-explanatory menu button.

Having unwrapped and charged the camera, before you can do anything with it – bar turning it on – you need to set up a Google account or connect to an existing one, which is frustrating if you want to get snapping straight away. There follows a message that your 'phone' – not camera – needs to connect with Google servers, which took our little unit several attempts.

Once we had spent 20 minutes sorting this out we were up and running; the camera from hereon inactivated by pressing the conventional power button on the top plate. It should be noted that switching it on doesn't immediately throw users into picture taking or 'shooting' mode though.

As with a handset first you have to unlock the screen, then select the camera shooting icon – both of which lose valuable seconds. Just pressing the shutter release button doesn't immediately throw you back into picture taking mode either, as we'd expected.

As with your phone, you don't so much turn this Nikon off as put it on standby. As the camera also has built—in GPS, the top plate indicator flashes intermittently in its dormant state.

Short cuts to playback or shooting are further presented on a three-option bar to the right of screen, the middle option bringing up the most smartphone-like display of 18 pre-loaded 'apps'.

Users can naturally add their own to this over the course of using the S800c, and while you can revert back to just shooting photos and recording video, navigating to these core settings is not as instant as with a more traditional compact.

The Nikon Coolpix S800c comes with an anti-reflective, contrast boosting OLED display rather than the typical LCD of most digicams, the responsiveness of which Nikon claims can hold a candle to the best touch screen tech out there.

While it did react instantly to each of our finger prods or swipes, we did think some of the function icons could have been presented slightly larger – on default setting these require fingernail precision to select, particularly the side panel icons in camera mode.

Also, because of its very nature the screen becomes rapidly smeared with fingerprints. Screen visibility is good, without noticeable image lag or ghosting when panning, though it does feel like we're watching a screen rather than the real thing and in that respect for us doesn't quite match the clarity of AMOLED screens on competing Samsung cameras, including the Galaxy Camera.

The Nikon Coolpix S800c is supplied with an EN-EL12 lithium ion rechargeable battery. This is charged within the camera, as all that's provided in the box is an USB-equipped mains plug and the necessary cable to hook this up to the camera.

The amount of shots provided via a full charge is just 140, according to industry testers CIPA, which would be poor for a camera without the S800c's connectivity features. Most otherwise comparable compacts manage 220-240 pictures for example, so the on-board tech here is sucking juice faster than a thirsty toddler.

The only reason you'll be using the S800c rather than your phone to take snaps and video is because the quality is theoretically better, right? But with what's still a relatively small sensor by camera standards that probably shouldn't be the only reason you're buying this Nikon.

We were slightly under-whelmed by the S800c's picture quality. JPEG stills are a tad soft straight from the sensor, with some loss of definition – particularly as regards highlights - and a slight fisheye effect if shooting at maximum wideangle.

Indoor shots really did benefit from the use of flash to avoid image blur, and above ISO800 setting image noise starts to appear, though at least colours are naturalistically accurate and white balance consistent. As we suspected at the start, the Coolpix is fine if all you want are snapshots, but if image quality is your chief concern there are better options for its premium price or near it.

Video for us worked slightly better on the S800c; if only because we weren't scrutinising each individual frame so closely. And thankfully the zoom facility can also be used once recording has begun, so framing isn't frozen at the point that was reached before recording began.

The 16 megapixel, 10x optical zoom S800c is one of those good ideas that make us wonder why camera companies didn't attempt it sooner.

Until that is you start using the compact and discover that if all you want to do is just take pictures and aren't bothered about expandability, picking up messages via Google mail or downloading apps, then perhaps a conventional dedicated camera would be more practical.

Plus, as a first-of-its-kind device that will appeal to early adopters, the Android 2.3 powered S800c comes with a premium price tag that at £379 isn't much cheaper than a basic entry level DSLR.

But, while it does feel like a lot for what is at its core a snapshot camera, the same could be said of the only other point and shoot that currently comes close in terms of operating system and feature set: Samsung's Galaxy Camera at £399. It will be very interesting to see how that physically larger, bigger screened model matches up.

We did have fun playing with the S800c that increased in proportion to the amount of time we spent with it. But, for the price, a more realistic offering would be to witness this technology on a camera that offered better quality than your average snapshot – and undoubtedly one day very soon we will.