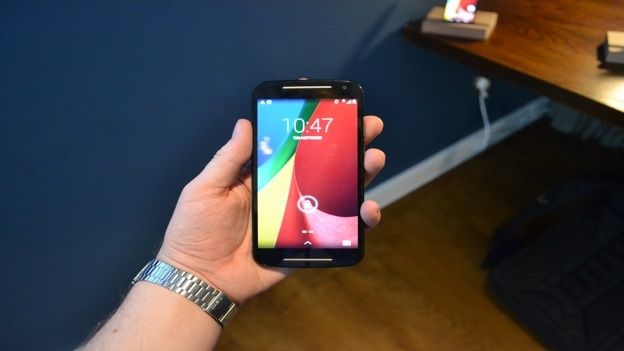 Motorola's Moto G became the Lenovo owned brand's biggest selling device ever when it was released last year, thanks to its premium features and budget pricing.

With the new Moto G, Motorola hopes to give you even more bang for your buck, but is it a worthy upgrade? Let's take a look.

We were big fans of the screen on the original Moto G and after a few hours of playing with the new model we are happy to say it has got better. Now a 5-inch version, the display sticks with the same 720p resolution that while obviously doesn't match up to its 1080p rivals, still provides a good amount of detail and vibrancy in colours.

Viewing angles are strong and even in daylight the screen can handle itself well.

On the back you'll find an 8meg shooter that takes decent pictures but it's not a compact cam replacement. Up front there's a 2.1meg version for selfies, if you like that sort of thing.

Under the removable matte plastic shell is a Snapdragon 400 processor, 1GB RAM and 8GB of internal storage. Thankfully the storage can be increased with up to a 32GB Micro SD card.

Scrolling through Android 4.4.4 KitKat is as enjoyable as ever, especially as there is basically no unnecessary software additions to bog down the system. Performance is impressive; with lag kept to a minimum and applications open pretty much instantly.

For a device that costs under £150, this is very impressive. Sadly, as it has such a low price point you are going to have to forfeit some features. Most notable is 4G support, which is a bit of a disappointment as we had the super speedy connection on an update to the original G.

NFC is also missing, though we can't say we're overly fussed about that.

Motorola has added a few nice additions, including a back up and restore tool, plus four apps - Assist, Alert, Migrate and Connect. Migrate is the simplest of these, acting as a quick way for you to transfer data from an old Android phone or iPhone. Alert can send out emergency messages to a bunch of pre-determined contacts if you find yourself in a spot of bother and Connect is there if you plan of rocking a Moto 360 smartwatch.

Assist is the most interesting app though, changing the state of your phone depending on your environment. So, set the times you normally go to sleep and it'll silence incoming alerts apart from those from VIP contacts. No more pesky work emails waking you up at two in the morning.

Constructed out a mix of shiny and matte plastic, the Motorola Moto G feels like a premium device. There's no creaking and it just doesn't feel at all cheap. The smooth back is a joy to hold, though on the white model we tried we do worry that it might start to get a bit dirty after extended periods of use. There's also a nice weight about the device, though it doesn't feel too heavy.

Two stereo speakers sit either end of the display and pump out decent sound, while a volume rocker and standby switch sit on the side.

We were told that the Moto G should easily last a whole day of use, even if you're a heavy user, but we'll give it a thorough test in the upcoming days and let you know in the full review.

Motorola has again impressed with its affordable option and even though we would have liked to have seen a few more of the Moto X features trickle down to the G, the larger screen, beefed up snapper and quad-core processor make up for it. If only it had 4G.