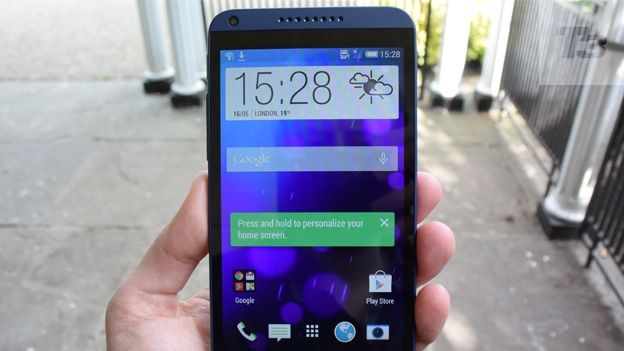 HTC's new mid-range Android smartphone offers big-screen thrills for a bargain price. Find out if its worth your wonga in our HTC Desire 816 review

It may have been overshadowed by its fancier brother, the HTC One M8, but the HTC Desire 816 shouldn't be overlooked. It packs the same size screen as the OnePlus One - dwarfing most rivals around this price range - but costs even less than that mobile, meaning it also undercuts the Google Nexus 5.

Sound too good to be true? Let's find out how it fares.

Its screen is 5.5 inches, which is only marginally smaller than the Samsung Galaxy Note 3 and HTC One Max (both of which are considered phablets). It'll be too big for some, and it did poke out of our pockets. But if you want a big screen blower, this is one of the most affordable around.

Its plastic back feels very similar to the iPhone 5C's, though it comes in more muted colours (black, red, blue, and green). It doesn't feel cheap in any way, but unless you're wearing piano mover's gloves, the plastic will soon be covered in fingerprints. The edges are matte, and while it does stop the device slipping out of your hand, it is at odds with the plastic back.

Build quality is solid, but don't expect anything near as premium as its stablemate, the HTC One M8. 165g isn't light for a phone, but it won't put a dint in your pocket. Providing you have pockets big enough to fit it in, that is.

Android 4.4.2 comes as standard, and this is overlaid with HTC Sense 6.0. These are the latest versions of both, and the same as seen on the HTC One M8. As such, they have a few bells and whistles.

Android 4.4.2 combines texts and IM into an app called Hangouts, and you can look up business phone numbers straight from your phone book, without having to Google them. Sense 6.0, meanwhile, is cleaner, and less obtrusive than previous versions. Blinkfeed is basically a news feed that looks a bit like Windows Phone's live tiles, while HTC Zoe turns your snaps into mini photo montages.

So far, so standard. Basically, if you buy this mobile, you're getting most of the same software as the HTC One M8 - bar some camera features and gesture controls - but with a bigger screen and for less than half the price. Obviously it's on the hardware side of things that HTC has made some concessions.

You can see in our hands-on snaps that it looks a little grainy. But it's fine for everyday use. And the viewing angles are excellent - get a group of you gathered around, and everyone will be able to see what's on screen, helped as well by the gargantuan size, of course.

The 13-megapixel snapper gives more detailed photos than the HTC One (M8)'s ultrapixel model, but it doesn't perform as well in low light. The images have quite a lot of noise, which is the price you pay for buying a cheaper handset. After using the Samsung Galaxy S5, the Desire 816's shutter does seem a bit slow. But maybe we've been spoiled.

The One M8's Ufocus feature is also missing, so you won't be fiddling around switching points of focus with the Desire 816.

The camera does have a selfie mode, though, so you won't have to pose in front of a mirror for your vanity shots. The front-facer is a 5-megapixel jobby too, so your face will be captured in bags of detail. We'll leave that up to you to decide if that's a good thing or not.

1,080p video recording is the order of the day. Footage is smooth, but again, you lose some detail in low light. Hats off to HTC for including a microSD card slot, though. That'll help you fit hours of videos and photos on the phone.

A 1.6GHz quad-core Qualcomm Snapdragon 400 chip isn't going to set the world alight, but it's fine for day-to-day tasks like web surfing, switching between apps, and gaming. Alien shooter Edge of Tomorrow ran without a hitch, and the big screen and front-facing BoomSound speakers really added to the experience.

This will change as games become more graphically advanced, so be warned, the HTC Desire 816 won't always be able to handle newer games.

We're not fans of the Bloatware, but Blinkfeed is pretty unobtrusive. Plus - hurrah! - you can turn it off. Finally, it seems companies like HTC and Samsung are taking note that sometimes less is more.

The HTC Desire 816 lasted us a full day with fairly heavy usage. Its battery isn't as hefty as that in the Samsung Galaxy Note 3 or LG G Pro 2, but it's fine as long as you're not completely rinsing it. Like the Samsung Galaxy S5, there's a power saving mode too, which should help if things get really bad.

We like the HTC Desire 816 a lot. If you can sacrifice a few features, are prepared to forego top-end performance, but still want a big screen, it's a real contender for your dosh. It might be worth waiting to try the OnePlus One, but as it stands, this is a front-runner for the best big blower at this price.