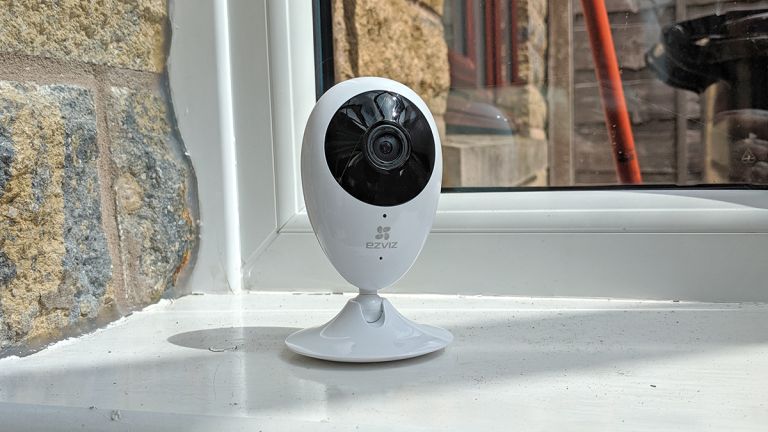 The app and functions are fairly basic, but the Ezviz Mini O Plus does what it's supposed to do well, and gives you the option of local as well as cloud storage.

There are plenty of security cameras on the market now, ready to keep their beady eyes on your home while you're on holiday or out at work – and most of them, like the Ezviz Mini O Plus that we're looking at here, are affordable, simple to set up, and easy to use.

That means it's hard for a camera like this to stand out in a crowded field. It also means that most cameras are going to do the job well enough for you – take a look at something like the Kasa Spot from TP-Link, for example, which is similar to this in a lot of ways.

As the name gives away, this is a camera for indoor use, so don't put it at the bottom end of the garden because it won't last all that long. It offers a 1080p maximum video resolution, two-way audio, and night vision for capturing footage after you've gone to bed.

It's powered by a single USB cable connected to the mains, so you'll need to put the device somewhere near a power socket to do its filming. Note also that the Ezviz Mini O Plus is sometimes called the Ezviz Mini O 1080p, so don't get confused – it's the same camera.

The setup of the Ezviz Mini O Plus is no different to other cameras of this ilk: you plug it in, you download the relevant app on your phone, then you wait for the two to make a connection. After that, you can view a live feed from the camera on your phone, and get alerts when motion is detected.

We were set up in just a couple of minutes, though you do need the camera reasonably close to your router – within a room or two. It only operates on the 2.4GHz frequency, which offers slower speeds and a longer range than the 5GHz one, but most modern routers support both.

We do like the different ways you can get the camera stood up or mounted. It can stand freely on its base, but the base is also magnetic, should you want to fasten it to a fridge or something similar. In the box you also get a metal plate for mounting to the wall or ceiling, and a rubber adhesive sticker for fixing to anything else you want.

That gives you a lot of options for putting the Ezviz Mini O Plus anywhere you like – provided there's a mains socket within reach, as we've already mentioned. Once you've got the app fired up you're ready to start monitoring.

Connecting to a live feed from the camera is a breeze, and we always found the video of a high quality and stable during our testing. The night vision works well, at least across the width of an average size room, and the audio recording is of a decent quality too (you can switch the audio off if you want to go video-only).

The motion detection is a little on the sensitive side as far as the default settings go, with the smallest movements setting it off, but to the Ezviz Mini O Plus camera's credit, you can tweak this sensitivity and even set up particular zones within the frame to monitor for motion. That's more flexibility than you get with a lot of cameras.

As is usually the case, cloud archives your recordings (rather than just snapshots as they happen) cost extra: prices start at £4.99 a month for seven days of clips (you get a 30-day free trial with your camera purchase). To be fair to Ezviz, you can also stick a microSD card inside the camera, so you don't have to rely on a subscription.

Support for Alexa and Google Assistant is included here too, which means you can access a limited number of voice commands (like being able to send a video feed to a Fire TV or Chromecast). This sort of integration isn't as useful for a camera as it is for something like a smart plug or a smart light though.

The Ezviz Mini O Plus camera is a lot like other cameras we've tested in this sort of price range. They're nicely designed, they work pretty well, and they're a decent option if you don't want to pay for the sort of advanced options and AI face recognition you get with cameras from the likes of Google and Ring.

There are a few rough edges in the app to contend with, but we really had no major complaints: viewing motion detection events or tapping into the live feed is all straightforward and easy to do, and there's a decent level of customisation when it comes to camera sensitivity.

Being able to store some recordings in the cloud for free would be a nice extra, but a paid subscription appears to be par for the course these days. At least you can use a microSD card to archive recordings if you really don't want to pay any extra.

At this sort of price, you get more than you might reasonably expect: the ability to disable motion alerts for certain times of the day and night, a wide 135 degree field of vision, a really good selection of mounting options included in the box, and more. If you're looking for good value from your home security camera, check out this one.