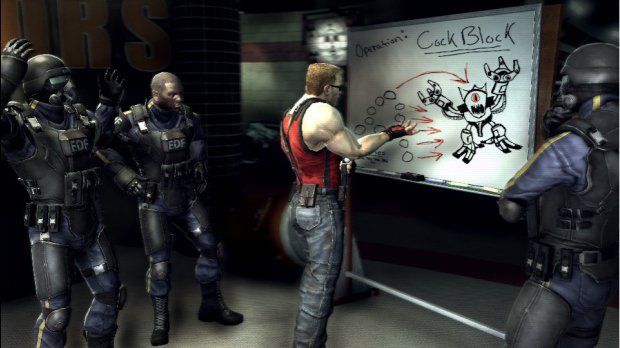 So, our Duke Nuekm Forever review is a little late, but given the company we're in that's probably acceptable.

For a video-game buff Duke Nukem Forever is interesting to play, but all too rarely enjoyable. After finally being released following a 15 year wait, the much anticipated game received a poor reception, leading to the game's PR company threatening journalists over Twitter.

Duke Nukem Forever: Past its sell by date

It fizzes with ideas that once upon a time would have been novel - perhaps breathtaking - but poor implementation and the passage of time simply make them feel staid and worn-out. This is a game that should be sitting on the same shelf as Half-Life and Doom 3, not Bulletstorm and latter-day Call of Duty, and unfortunately these are the modern yardsticks it must be judged by.

It doesn't help, of course, that the game's opening levels are universally the poorest sections of the game. After early poo-chucking hi-jinks (the game's only true belly laugh) the lengthy saunter through Duke's boob-filled day tries to be Half-Life but is instead an unfunny slog, while the combat that peppers the lengthy trawl through the Ladykiller casino and the streets of Vegas simply isn't a patch on that of later levels.

Then, sadly, the glimpses of greatness that crop up later on - your monster truck burning its way through the Ghost Town, the satisfaction of a perfectly placed pipebomb during a Hoover Dam pig onslaught or the fun and games of a shrunk Duke in DukeBurger - get lost in a torrent of other problems.

When you're going into battle with the dam-top Battlelord for the tenth time, on the console version suffering a painful load-time with each demise, you know you're being punished through no fault of your own.

It's true gaming pain, mirrored frequently throughout the play-time and underlined during the vinegar strokes of the game when Duke must swim underwater from air bubbles to air bubbles like an increasingly desperate (if somewhat more macho) Sonic the Hedgehog. The difficulty levels waver throughout DNF as much as the graphical quality (so on 360 the whole gamut between poor and passable) and every play session is invariably bookended by frustration.

Duke Nukem Forever: Not so funny

You can't help but feel that Duke Nukem himself should be the joke of the piece, but ultimately 3D Realms, Gearbox et al. approach him with all the earnestness of a MasterChief with a hard-on. And the sexy ladies? Well I'll just say that in the old days, when they were made out of pixels, I didn't mind kicking the pregnant ones to death so much.

It would be entirely wrong to say that there's nothing to be enjoyed in Duke Nukem Forever, to my mind many of its reviews have been far too scathing, but at the same time anyone who buys it at full price would be right to feel short-changed. It's a messy creation that somehow feels simultaneously rushed and over-laboured: the result of Gearbox's late-game edits meeting over a decade's worth of pipedreams and half-realised ideas head-on.

Released on the original Xbox DNF would have had an easier ride, released today it's too often a creaking, frustrating and frequently dull creation to recommend. If you're interested in games and game design it's something that one day you should play, but certainly not one that you should shell out too many of your hard-earned pennies for.

Overall we're glad the Duke came back, and we hope that he stays around, but he sure as hell could have turned up with a little more style...