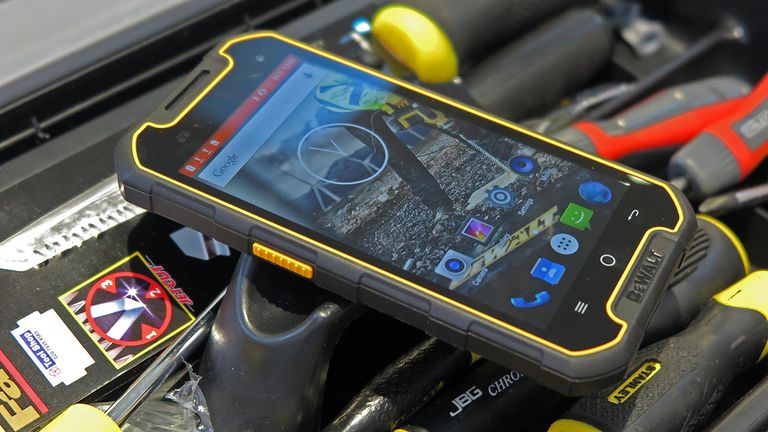 The Dewalt MD501 Rugged Smartphone isn't the type of device we're used to seeing here at T3. We're much more used to the sleek and sexy Samsung S7 Edge or iPhone 6S, but could those delicate phones survive a 2-metre drop onto solid concrete? Pah! Don't make me laugh.

The Dewalt smartphone can however, and we've tested it as well - just watch the video below:

Nothing more than a slightly dented case, a little bit of wear and tear, but no smashed screen, thankfully.

For all intents and purposes, the Dewalt phone is a modern smartphone, it has a 12 MP camera, quad-core processor, 4G, and a 5-inch HD display.

There's 16GB internal storage which is expandable via MicroSD.

It even has some features you may not expect, such as a dual SIM (useful for business and personal numbers) and wireless charging.

The specs aren't all peachy though - the phone runs Android 5.1 Lollipop - which feels and looks ancient now compared to Marshmallow. I have been told that engineers are currently testing Marshmallow, and will be updating to this once all the problems are ironed out.

It clearly won't be challenging Samsung or HTC in the flagship steaks, but it's a fairly decent performer, and we didn't notice any slowness or lag during our short time with the headset.

Where the Dewalt MD501 really stands out is with the rugged casing, it looks like an iPhone on steroids… or at least, an iPhone with a massive Otterbox case on.

We really like that the case provides plenty of grip - the materials used and groves make it very difficult to drop.

This casing is rated at MIL-STD 810G, which means it can survive a two-metre drop onto solid concrete. It can also survive temperatures ranging from -20 to 60C, and is rated IP68 so it's dust tight and can be fully submerged in water.

The screen is also Toughened Gorilla Glass 3 so it should resist scratches, although we wouldn't throw it in a toolbox without a screen protector. Just in case.

The glove-compatible screen, durability, and dual SIM are probably the only work-specific features - unless you also happen to be a very fashion conscious builder, and like your phone and tools to match. There's no, er, magnet for finding lost nails, or radar for finding weak spots in a wall. We assume those additions would be useful…

BUT the preinstalled wallpapers are all of tough men using Dewalt tools, so that's cool.

The Dewalt packs a large 3,020mAh large battery, which is good for around a day and a bit.

How does the camera perform? It's pretty decent. The colours are vivid and pictures taken in decent light are nice and sharp. Low light performance isn't amazing.

Here are some image samples:

Surprisingly pleasing results from this image taken of my dimly lit desk. The colours not too oversaturated and there's no noise. If you zoom in the image does look slightly blurred from noise removal, and the blacks are a tad too black, but otherwise a good picture.

This is also quite a pleasing image for an affordable smartphone. The main problem being here the fruit looks waxy as it has been smoothed excessively.

Outside images are impressive, especially here where you have a mix of bright and dark areas in the image. The only problem we found with this is the image looks over-sharpened when you zoom in.

Should you buy the Dewalt MD501? That depends on whether you need the ruggedness, obviously. Most people will be better served by a normal Android phone, and if you're clumsy then a case will do fine.

BUT, if you're Mr. Bean levels of clumsy, or your phone genuinely takes a battering from work, whether you're a builder or farmer etc, this is certainly worth a look.

There are of course downsides, and most of them centre around Android 5.1, which feels ancient compared to newer versions. Although, an upgrade to Marshmallow is coming.

The Dewalt MD501 Rugged Smartphone costs £379and is available now.