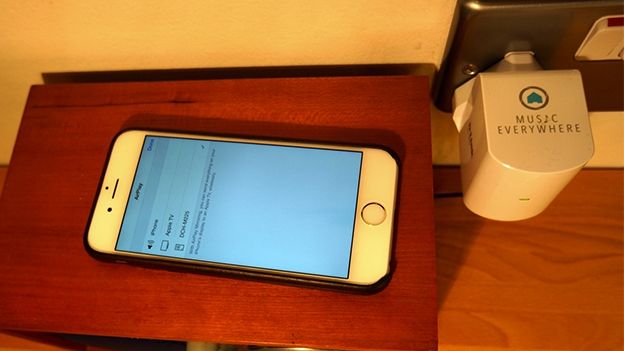 Range extenders that simply sit in a mains socket and boost your wireless signal in the farther flung reaches of your home or office are handy if you suffer from Wi-Fi black spots. But what happens when you add a minijack, DLNA and AirPlay connectivity? Yep, the ability to stream music from your iPhone, or laptop to any old hi-fi or radio with an Aux input. So although it looks just like the cheaper D-Link Wireless N300 extender, the new DCH-M225 is branded Music Everywhere with good reason.

It is essentially an affordable version of the Apple Airport Express, albeit without the Ethernet port, and it even undercuts the Netgear WN3500RP to become one of the most cost effective ways of bringing multiroom music streaming to the masses.

Being no bigger than a cube multi adapter (54 x 42 x 54.5 mm), this little device can simply sit in a mains socket anywhere it can see at least some Wi-Fi signal. It's not going to win any design awards, but then you're probably going to plug it in behind your hi-fi, or perhaps at skirting board level in the spare room. Once installed, you can completely ignore it – unless you prefer to switch it off at the wall when not in use. It's worth noting that the green LED remains on and the device is warm to the touch around the clock, so depriving it of power at bedtime is probably a good idea.

The D-Link DCH-M225 performs two functions: boosting your Wi-Fi signal and streaming your music. The first uses 802.11n/g/b to offer wireless speeds up to 300 Mbps, which is a little slower than the Belkin N600 and D-Link's own Wireless AC750, but proved fine in this test.

For streaming music, there's DLNA compatibility, which makes it possible to connect almost any Android phone, or Windows PC. The good news for Apple users is , D-Link has also paid for an AirPlay license, making it even easier to stream uncompressed audio from your iPhone.

For people that don't work in IT, punching in 16-digit passwords and SSID codes is not fun, and thankfully D-Link has come to realise this and offers with three different ways to get the DCH-M225 online that are all fairly painless. If your router has a Wi-Fi Protected Setup (WPS) button, you can just press this and the WPS button on the DCH-M225.

Otherwise, as we did, you can download D-Link's QRS app onto your iOS, or Android device and get that to join the wireless network generated by the DCH-M225. It's then a case of following the prompts on the mobile app to get everything online and communicating. For iOS users, a speaker icon labelled D-Link will appear next to your AirPlay icon ready for streaming.

If you prefer simply to stream directly from phone to speaker without disrupting your network, it's an even simpler case of logging onto the D-Link's own Wi-Fi signal by typing in the password, which is printed on a sticker that you can stick wherever you like.

What you won't find here is Bluetooth, or the increasingly fashionable NFC technology and if you think about it, there's really no need for it. Yes, Bluetooth would be a quicker and simpler way for visitors to join and play music from their phones, but the audio would be compressed, the range limited and the product would be more expensive.

As a range extender, the DCH-M225 proved successful in joining a Wi-Fi network from a router at the far end of a house and repeating that signal way out into the garden, which was previously the only Wi-Fi-free zone.

The DCH-M225 managed to stream Wi-Fi out into the garden with relatively few pauses and dropouts too. In fact, once the link with the speaker was established, it played continuously with no further dropouts. Obviously, the strength and stability of your own home network is the deciding factor here.

What impressed us most was the way the DCH-M225 can so discretely turn older sound systems into wireless streamers. Our Tivoli Audio One, once limited to playing AM/FM radio, was reborn with iTunes Radio and Spotify steaming through it. It can do similar favours for any radio with an Aux input, even got our high-end hi-fi online and streaming audio.

Could it be improved? For the audiophile, a digital optical cable would be preferable to a regular headphone output of course. Otherwise, performance is intrinsically linked to the health and strength of your home network. Signal dropouts tend to shatter the enjoyment of music and with this device tending to be tucked away at floor level, there's a chance of its incoming Wi-Fi signal being blocked.

In summary, the DCH-M225 proved doubly useful by extending our Wi-Fi signal into the garden (and beyond) and bringing all the convenience of AirPlay to once-loved sound systems.