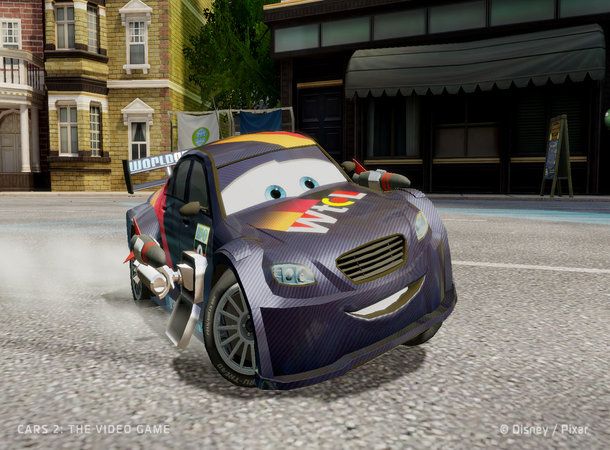 If we'd told you a few months ago, using the hypothetical machine what we keep in our desk for space time continuum emergencies, that a game based on a movie franchise, especially a Pixar movie, would be better than the film, you'd have pointed and laughed at us. Possibly even spat.

Cars 2: Better than the real thing

But here it is, proof resolute, and probably the exception that proves the rule - Avalanche Software has developed a fun Mario Kart inspired arcade-style racer that is better than the Car 2 film, T3 can reveal.

Cars 2: Secret of my success

There are several secrets to Avalanche's success with Cars 2. The game isn't a verbatim re-enactment of the film. Pixar must've had the good grace to let the developers go where they wanted and just told Avalanche to maintain the characters, spy homage and, oh yes…racing…and what racing there is.

The racing is split in to so many modes with versus, battle mode, campaign mode that it can be hard to figure out where you are meant to go - even with the help of the sexy Porsche car and a Michael Caine sound-a-like channelling the best East-end Bond we never had. But the dressing would be for now't if the racing and combat mechanic we rubbish, which they aren't.

The game is family friendly so, even with an onslaught of different weapons to choose from - it is balanced enough so that no one ever falls too far behind. You get your bog standard litany of racing clichés and power ups but it's handled with so much next-gen gusto it never fails to deliver fun in spades with knobs on up to eleven. In fact, scratch a little deeper than the quick and dirty pick up and play Cars 2 so obviously is and there's a deeper going on.

Not the cheap-low-down filthy-banged-up-second-hand Lada we were expecting but a brilliant and fun racing gaming with depth to boot.