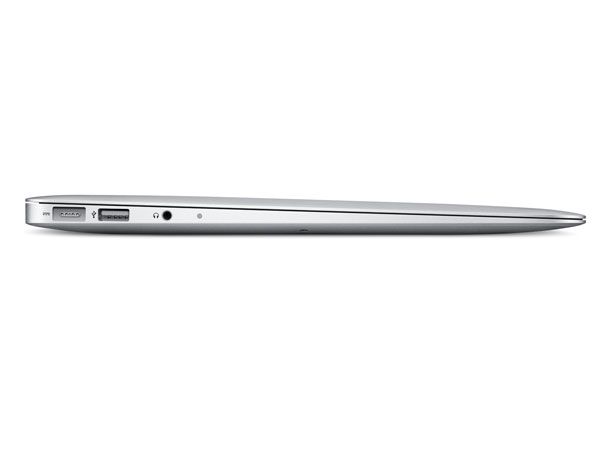 To date, the MacBook Air has been something of a novelty item. Sure, its low size and weight were impressive, but its high cost and relatively low power curbed its potential for widespread appeal. This new release is still prohibitively expensive, but increased power and a host of technologies developed for the iPad mean even if it doesn't make the mass market, it's certainly an object of desire.

All the new Airs now boast solid state storage, but the chips are mounted on a card instead of in a 2.5-inch enclosure. This uses around 90% less space, freeing up room for a series of powerful battery cells. This 13-inch model gives around seven hours of WiFi use on a single charge. Perhaps even more impressive is the new standby mode. As always, closing the lid puts the machine into sleep mode, but after an hour it goes into an ultra-low-powered state. So little energy is used that the Air can run for around 30 days in this standby mode, but is instantly on as soon as you open the lid.

"As you'd expect from an Apple laptop, the screen is gorgeous, with excellent colour definition..."

The MacBook Air's processor is still nothing to write home about, but there's more to performance than processing power. Thanks to its solid state storage and a great new NVIDIA GeForce 320M integrated graphics chipset, it's far more capable than the clock speed suggests. While it could never match a high-end MacBook Pro for performance, you can open multiple applications, watch high-definition video and even play some modern games.

It's certainly no underpowered netbook. As you'd expect from an Apple laptop, the screen is gorgeous, with excellent colour definition and viewing angles. The display housing now uses the same unibody engineering process as the lower enclosure, milling the casing from a single piece of aluminium for strength and lightness.

Several new features debut with the new MacBook Air. It now has stereo speakers, and twin USB 2.0 ports, one on each side of the device. Naturally there's still no optical drive, but system software is now supplied on a read-only flash drive, so you can reinstall without using a shared or external DVD drive. This 13-inch model also has an SD Card reader, unlike its 11-inch stable mate. FaceTime is making its way from iOS to Mac OS, so the onboard webcam has been rebranded the FaceTime camera, but apart from improved low-light performance it's basically the same as the iSight.

For all its brilliantly-realised strengths, there are a few negative points. It's still prohibitively priced, there's no integrated 3G option, no backlit keyboard and for some reason, no Kensington security slot for fitting a laptop lock. It's also supplied without Adobe Flash preinstalled, so the first thing you do should be to take a trip to Adobe's website to install it yourself.

The new MacBook Air could well represent the future of notebooks. It's the smallest, lightest laptop Apple has ever produced, and is bound to inspire a host of Windows-powered imitators. It's currently too expensive to become a truly mainstream device, but as the price of flash storage falls, who knows what could happen?