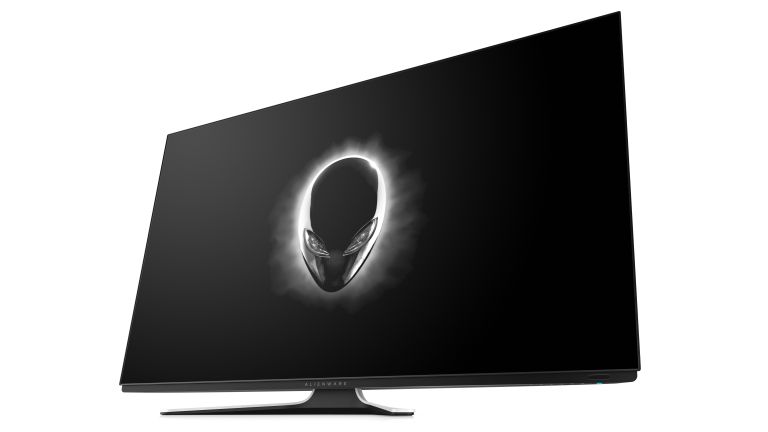 The Alienware 55 OLED AW5520QF is the best large-scale gaming monitor on the market today. If you want a very large, TV-sized gaming monitor then this is, providing you can afford its very high entry cost, what you should buy. It's obviously a niche product, and will clearly be too much (in size and price) for many gamers, but that takes absolutely nothing away from its stunning build and image quality, nor our ability to recommend it if you can afford it.

Welcome to T3's official Alienware 55 OLED AW5520QF review. Over the past week T3 has been testing out this large form-factor, OLED panel to see if it is worthy of a place in our prestigious best gaming monitor guide. And, what follows, is our considered take.

We've broken this Alienware 55 OLED AW5520QF review down into a series of easily digestible areas, too, including price and availability, design and build quality, as well as screen and performance, so read on to get a full overview.

For today's best prices see the below chart:

Take the AW5520QF out of the box, which is actually quite hard considering that the top half is exposed wafer-thin, super-light OLED and the bottom is weighty chassis stuffed full of silicon (total weight without stand is 25.5 kg), and the first thing that hits you is just how aesthetically pleasing this Alienware monitor is.

A product of the maker's new Alienware Legend Industrial Design, the monitor boasts a series of gentle but pronounced lines, which are contrasted sharply by the scarily thin, incredibly flat OLED panel, which at certain angles looks literally pressed to the monitor's chassis.

The chassis itself, as aforementioned, only extends half way up the back of the near-bezel free panel, which is adorned with a glowing, horizontally-aligned LED lighting bar at its top, as well as a glowing Alienware logo in its top centre. The monitor's ports and power input are accessible behind a detachable backplate.

In terms of ports, you get three HDMI ports, a DisplayPort, a USB 3.0 upstream, four USB 3.0 downstream, an audio line-out and a SPDIF out. Power is handled by a trusty old kettle lead. HDMI and DisplayPort cables are included in the box, as too a remote control for the panel.

Also behind the removable backplate you find a simple but strong (as in, the cables are easy to insert and stay put) cable management system. Cables can be fed in from either side down deep channels and then out behind the base's central strut for a zero-visible cable experience if you so choose — and when the monitor looks this good, that is exactly what you want.

In terms of build, the chassis with panel comes separately (plus ça change) to the monitor stand, but unlike many smaller gaming monitors, here you actually need a cross-head screwdriver to affix the base and monitor together. It is important to note here that both a stand plate and wall-mount plate is included in the box, as too the fact that this monitor will not stand up on its own without a stand.

When T3 set this up we found that lying the monitor down on a flat, covered surface, with its lower end slightly protruding over the edge was best, as that way we could get the required clearance to screw the stand in straight, while also keeping the screen flat and avoiding any risk that the whole thing might tip over.

Indeed, be under no illusion, setting this monitor up should really be tackled with more than one person. Not only is it large TV heavy, but the fact that the OLED panel is exposed for the upper 50 per cent, and that it is wafer thin, really presses on you the need to not introduce any prolonged angles into its orientation other than 180 and 90 degrees.

Overall the build quality on this monitor is absolutely first rate, with everything about it showcasing an immaculate fit-and-finish and radiating a sense of dense, well-made quality. Classy just about sums it up.

I simply loved the two-tone silvery-white and black finish, too, and the monitor turned heads in the T3 office whenever anyone walked by. It is an awfully clean yet at the same time very bold design, and one that feels targeted at a mature professional audience. We could easily see the Alienware 55 OLED AW5520QF working well in an office, living area and entertainment room equally well.

That is helped by the fact that Alienware have judged the illumination just right on this design. AlienFX is naturally available, allowing you to customise the lighting regions on the monitor, but crucially they are all backwards facing, so you get no distractions and breaks from in-game immersion.

The reason this monitor costs so much isn't primarily because of its future-industrial design, but rather that it comes with a simply stunning OLED panel. And that's a 4K OLED, too, that boasts a wide colour gamut of 98.5% DCI-P3 (in layman's terms, super strong, vivid and accurate colour reproduction), and "infinite contrast".

This infinite contrast comes from the fact that OLED panels feature pixel-by-pixel lighting and, as a result, incredible contrast ratio (130000:1 here) potential. This, in turn, means that blacks in images appear properly black, as in true black, while the lightest part of the screen, no matter how close to the blacks, deliver incredible punch.

On that point, though, I feel it necessary to mention here that the peak brightness on this monitor is 400 cd/m², so while the image it produces definitely benefits from the OLED tech, in traditional ways of distinguishing a screen's HDR ability (OLED works differently) it's not really an ideal HDR screen. Currently the top HDR TVs and monitors on the market boast peak brightness ratings of over 1000 cd/m², so if true HDR performance is a must then I think this monitor doesn't quite tick that box.

To be very clear, though, I was really impressed by the image quality the AW5520QF produced, and that was in no way affected by a rather standard peak brightness rating. The OLED technology is astonishingly good at reproducing crisp, vibrant and sharp images, while the fact that this monitor delivers a simply outrageous response time of 0.5 ms and maximum refresh rate of 120Hz means that ghosting and tearing were simply non-existent on test. This monitor supports AMD Radeon™ FreeSync™, too.

I also must stress here the sheer size of the panel adds serious amounts of immersion, as even when positioned at medium distances from it, it just fills your vision. The bezels on the AW5520QF are so small you soon forget they are even there — this monitor definitely has a quality where it draws you into the screen when in use, dissolving into the background. Here at T3 we think this is one of the best qualities a gaming monitor can have (well, it's about the in-game world, right?).

On performance, what I would say here, though, is that if you ring this monitor up then you better have a system that can do it justice. We're loaded with top gaming systems here at T3, including high-powered Nvidia Max-Q laptops, games consoles, and a gaming desktop equipped with a Nvidia GeForce 2080 Ti, so pumping out games at 2K or 4K resolutions with the bells and whistles on wasn't too taxing. And the resultant gameplay looked absolutely amazing!

However, we feel that if you don't have a system that can hit these resolutions, then you are wasting your money if you ring one of these up. It would be much smarter to opt for a smaller dimension, smaller resolution panel, but one that still delivers in terms of refresh rate, response time and smart extras like AMD Radeon™ FreeSync™ and Nvidia G-Sync.

Gaming aside, we also used the Alienware 55 OLED AW5520QF for some Photoshop work, for streaming some The Witcher off Netflix, as well as a dump-truck load of internet browsing and general usage. We even used the monitor to edit T3.com!

My takeaway from this period was, unsurprisingly, this monitor can easily handle everyday use and, thanks to that excellent wide colour gamut of 98.5% DCI-P3, means that it is also a great option for creatives who spend a lot of time illustrating or editing images or video.

That said, I would say that when you are spending the best part of three grand on a monitor then you should kind of expect that, though.

Look, the Alienware 55 OLED AW5520QF is obviously not the gaming monitor that the vast majority of gamers are going to ring up. It's size, at 55-inches, means that only those who essentially need a gaming-focused TV-sized screen in their setup should apply, and even if you do need that then there are plenty of other options to consider — including plenty of actual large 4K TVs that don't cost as much.

But, the thing is, the AW5520QF actually delivers, at least in our opinion, the absolute best performance in its (admittedly rather niche right now) product class — it is truly top technology embedded in a premium design. And if you are serious about gaming, and were thinking of upgrading, then this monitor is impossible not to recommend.

This monitor is going to easily handle all your gaming, computing and (HDR performance aside) TV needs for years and years to come, and if you're an enthusiast and want the best, then this is it. Indeed, when you start treating its cost like many people treat a new TV purchase, where they are happy to spend thousands of pounds on a new panel when they upgrade as it will then last them 5-10 years, suddenly this Alienware 55 OLED doesn't look quite so far-fetched in terms of price point.

The thing is, despite its technical accomplishments and stunning design and build quality, I can't help but feel that this monitor is about to be seriously challenged by a raft of new products like the recently announced LG CX OLED, which will offer the same sort of features like 120 Hz refresh rates and Nvidia G-Sync, and they will do so at what will probably be a cheaper price point. The TV-sized gaming-orientated screen market is about to get much, much bigger I think.

As gaming monitors are becoming more like TVs, TVs are becoming more like gaming monitors, and the line between them increasingly blurred. And that leaves gamers with a challenge on their hands when deciding what new screens to buy when upgrading. All I can suggest anyone looking to upgrade does is evaluate exactly what you prize most from your gaming screen before pulling the trigger. The good news, though, as this monitor proves, is that gaming immersion is about to take another step forward.