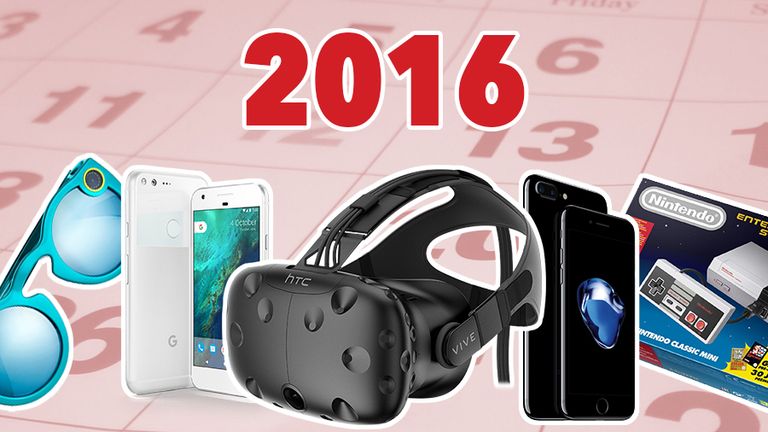 Well what a year it's been, for all kinds of reasons - but for the moment we're going to forget about Bowie, Trump, Brexit, Rio 2016 and anything else that's not directly gadget-related, to bring you our definitive T3 roundup of the best tech of the year.

Note that we've restricted ourselves to one gadget per month for neatness, so some great tech misses out for that reason - Microsoft's Surface Studio and the new MacBook Pros from Apple were both launched in the same month as the Google Pixel, for example.

Amidst all the noise that came out of CES at the start of the year, the Fitbit Blaze was one of the few products that was genuinely new, and real, and available to buy without too much of a wait (not a particularly common combination for CES). It may not have changed the smartwatch landscape but it wins our pick for the best tech gadget of January 2016.

Even if the chunky looks of the Blaze aren't to your tastes, it showed Fitbit ready to experiment with different types of devices, something that augurs well for the future of the company and wearables in general. With an appealing price and five-day battery life, as well as a fluid user interface for apps and notifications, it's still well worth picking up.

Announced in 2015, Sky Q became available to buy in February, and was immediately impressing anyone who had the cash to afford it. With the ability to resume watching on multiple televisions and devices with a tap, support for 4K-quality content, and a hefty 2TB of room for recording shows and movies, this feels like the future of home entertainment.

It's still not perfect yet - the mobile apps are sometimes buggy and features like voice search are still "coming soon" - but the interface is slick and fast, and it's built for the way we watch television nowadays (including the satellite mini boxes you can dot around your home to act as Wi-Fi hotspots). It would be December before Virgin had a riposte ready.

Oh Samsung - 2016 could've been so different if it wasn't for those exploding batteries. The S7 and S7 Edge were announced at Mobile World Congress and went on sale in March, quickly establishing themselves as two of the best Android handsets money could buy, particularly in the curved form of the 5.5-inch Edge which remains ahead of the game.

With a design to make you drool, full waterproofing, microSD card support, and of course a 3.5mm headphone jack (!), the S7 and S7 Edge are pretty close to perfection - and don't forget the extra virtual reality smarts if you add a Gear VR. Sure, they're expensive devices, but the phones are undoubtedly worthy of their place in our tech of the year roundup.

2016 had long been billed as the year of virtual reality and it didn't disappoint, with the HTC Vive going on sale in April and the Oculus Rift (minus its Touch controllers) at the end of March. Out of the gate the Vive was the most impressive, especially as it seemed to come almost from out of nowhere - the headset wasn't even announced until March 2015.

The HTC Vive can track you all around a room in 360 degrees, something the Oculus Rift only added right at the end of the year, and has a better selection of games in that regard too. The two headsets are very evenly matched in terms of ergonomics and visual quality though, and really they both deserve a mention in a roundup of the best tech of 2016.

May was Google I/O month, which meant a lot of talk about new apps, smarter artificial intelligence, and the future of Android. We also got our first look at Google Home, the company's own version of the Amazon Echo (there was even a hat tip towards Amazon during the presentation). The $129 smart device went on sale in the US in November.

Google Home is a speaker for your music and podcasts, a hub for your smart home, and another way of accessing the up-and-coming Google Assistant, which Google wants to become your best friend - answering your queries on the web, bringing up personal information you need (like emails and calendars), making recommendations and more.

Both sides in the video games console war edged a little further forward during 2016, with the Xbox One S announced at E3 in June, and the PlayStation 4 Pro following in September. With a smaller, more stylish design, 4K video and Ultra HD Blu-ray support, and upgraded CPU and GPU components, the Xbox One S is immediately impressive.

We liked the new console's refreshed looks and smaller footprint, while the Ultra HD Blu-ray support is something the PS4 Pro can't offer, and it's just a taste of what's to come from Microsoft: the Scorpio edition of the console is going to be significantly faster than the current generation, with smooth 4K gaming, and should be out by Christmas 2017.

Strong sales of the Classic Mini in the run up to Christmas capped a very decent year for Nintendo, with pretty much everyone on the planet having a try at Pokémon Go, and the upcoming Switch console generating plenty of buzz as well. Although it's only just become available to buy, the Mini was announced in July, which is why we're including it here.

Interest in the Classic Mini shows just how much loyalty Nintendo has built up over the years, and how keen many of us are to indulge in some retro gaming, even if there's nothing particularly revolutionary about the hardware itself. We'd suggest you can expect a lot more of these types of mini, retro consoles to show up during the course of 2017.

Launched at the very start of the IFA 2016 expo in Berlin, the Samsung Gear S3 was one of the most significant new releases in a market that's been showing signs of flagging this year. There's a lot to love about Samsung's newest timepiece, which comes in two different versions: the more stylish Classic edition, and the more rugged Frontier edition.

The watch features standard 22mm straps (so you can use any designs you like), water resistance, cellular connectivity options for those times you're without Wi-Fi, support for mobile payments, 3-4 days of battery life, an intuitive rotating bezel control, and on-board GPS so you can track your runs and hikes without the need for a phone connection.

September - the iPhone 7 and iPhone 7 Plus

Apple's iPhone launch is one of the tentpole tech events of any calendar year, and it still garners more attention and hype than just about any other gadget out there. This time around we got a new dual-lens camera system for the iPhone 7 Plus, some extra camera trickery, full waterproofing for the first time... and (controversially) no headphone jack.

The design and iOS 10 might not be revolutionary, but it's not easy to improve on near-perfection - and there's enough here to keep us interested in the iPhone, especially on the bigger Plus model. As usual, we got some big improvements in terms of the under-the-hood performance, and this is still the handset that everyone else looks up to.

2016 was the year when Google gave up on the Nexus programme to go all in on Pixels instead - phones designed and manufactured entirely by the Mountain View company (with a little help from HTC). It's a bold move, for sure, but it helps Google take on the Apple iPhone more directly without having to rely on any third-party manufacturers.

While the specs aren't mind-blowing - no waterproofing, for instance - the pure Android experience, superb camera performance, and the inclusion of the next-generation Google Assistant made this a must-have for many Google fans. And it's not just the 2016 models that make the Pixel and Pixel XL important - it's where Google might go with them next.

Spectacles may seem a strange choice for November (when they actually launched): at first glance they appear to be a gimmick of little interest to anyone over the age of 21, but they're a significant gadget for all kinds of reasons, as the queues to buy them prove. Out of (almost) nowhere, Snapchat has made the idea of Google Glass actually seem fun and cool.

The Snapchat Spectacles are a sign of our always-on, always-sharing, social media-fuelled way of life, and they make sharing instantaneous and seamless - no need to pull out your phone or frame a shot. Admittedly they won't be for everyone, but the fact that Snap Inc succeeded where Google failed tells you a lot about the changing tech landscape of 2016.

We'll end the year with news of an exciting trial run for a certain bit of tech, rather than a gadget you can actually go out and buy: Amazon Prime Air. Drone deliveries have been a long time coming - and they're not here for everyone yet - but December saw the very first parcel delivered by drone in the UK, an Amazon Fire TV sent to a customer in Cambridge.

Amazon's use of these delivery drones is still heavily limited by UK regulators (it's not publicly available in the US at all yet), and you have to live within a 5-mile radius of the company's Cambridgeshire warehouse to qualify for it - but it's a sign of the autonomous future on the horizon, at least for those of us with gardens big enough for a drone to land in.