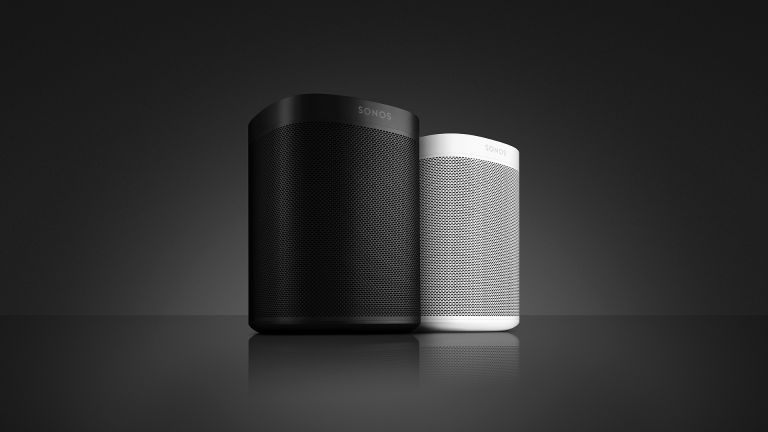 Sonos One is the best wireless speaker in its class and at its sub-£200 price. Not only is it a great Sonos multi-room speaker, it's a Sonos speaker with Alexa, Google Assistant and AirPlay 2 built in, and better than any of Amazon's screen-less Echo device in practically all respects – certainly sound quality.

Despite looking a lot like Sonos' old Play:1 speaker, except the colour choices are now Very Black or Totally White, the Sonos 1 has been almost entirely redesigned on the inside.

What you end up with is something that, at first listen, seems to sound much the same as Play 1, but with a quadcore processor and six-mic array letting it serve as an AI assistant as well as a multi-room wireless speaker.

The boosted processing power also mean it can be updated and adapted in much more versatile ways in the future. It is a true 'platform' rather than just a Wi-Fi speaker with knobs on, as Sonoses (Soni?) had previously been.

Sonos One sounds great for the size (like the Play 1). You can use voice commands to get tunes from Amazon Unlimited and Spotify, as usual with Alexa-inside devices.

However, you can also tell the speaker to play through your other Sonos speakers ("Play Lady Gaga in the kitchen"), even if they are older ones that are not Alexa-compatible. As with Play 1, you can pair two Sonos 1s in stereo or use them as front and/or rear speakers in a setup with a Sonos Playbase or Playbar.

It is all very seamlessly done. For just shy of 200 quid, it's great.

Sonos, in short, has fully abandoned its original, walled garden approach so its largely excellent speakers can act as the output for all the key music services. Sonos wants to be the default musical part of your smart home, and the output for whatever content streaming services you happen to favour.

Despite that, it has now spruced up its own app. This has long been a bit idiosyncratic (or 'a dog's breakfast', if I'm being less diplomatic) but now promises to offer easier access to your music and less head-bangingly irritating control of multi-room.

As an extra-cool feature, as you use Alexa to use music, the Sonos app updates to show that, letting you move seamlessly between voice and mobile control. And there are still buttons (well, touch controls) on the top of the Sonos 1, so there's always that option, too.